Sarah Milne describes how student interns helped to film and edit Survey of London content for The Bartlett’s MA in Architecture and Historic Urban Environments (MAHUE). 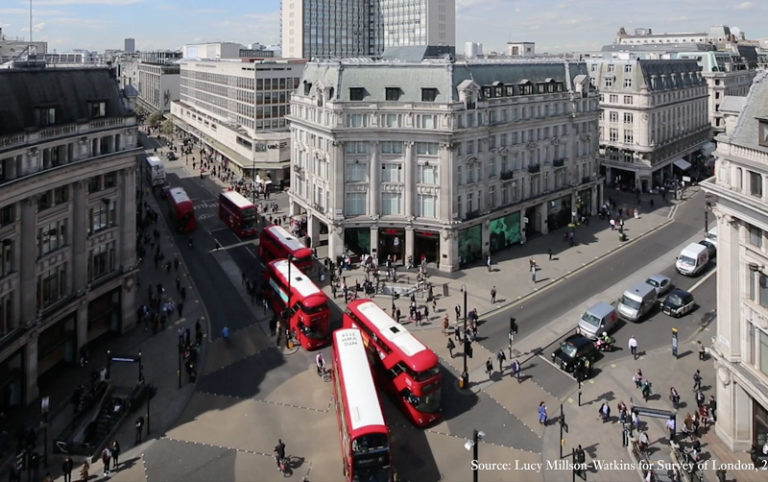 The Survey of London (SoL) teaches a global cohort of students in the principal 30-credit module on the UCL Bartlett School of Architecture’s MA in Architecture and Historic Urban Environments (MAHUE). Sarah Milne, module coordinator describes how COVID-19 restrictions forced a rethink of how to teach the module, and the role played by Connected Learning Interns in developing the module for the new academic year.

Rethinking the Survey of London

A large element of the SoL’s teaching is dependent on being on site in London with the students. Traditionally, SoL staff take this module’s students around London, explaining to them the significance of its building fabric through walks, introducing them to new research methods and techniques, and thus allowing them to experience and learn from the city in a unique way.

Against the background of the pandemic, we knew we needed to re-invent our teaching methods to address the limitations of online teaching for our needs. We had to find a new way of building relationships, fostering conversation, and giving students a sense of place that could work in an online teaching environment.

Interns could be involved in numerous activities, from technical support for remote teaching to developing learning resources or enhancing experiences for students studying remotely

The scheme funded 147 internships across 47 departments and central services units, each paid the London Living Wage for up to 35 hours’ work.

A further 100 Connected Learning Internships have been made available to help staff prepare teaching for Terms 2 and 3.

The pandemic and associated restrictions meant our Survey of London walks would be impossible this term, and so we made the decision to film a series of site visits as pre-recorded sessions, for students to access remotely in their own time.

The SoL had already experimented with film, and a series of short films seemed to offer the best alternative – if we could find some funding for the technical expertise required.

UCL’s advertisement of funded internships seemed to provide the solution! As well as gaining technical skills we were lacking in our own team, collaboration and sharing of skills and ideas with student interns was an attractive option.

‘I really enjoyed this job. Besides practising my filming and editing skills and learning to deal with different filming and editing demands, the best thing I have gained is the precious experience travelling across the city and recording the historic places with the professionals of the Survey of London…’ Jamie Cheng, Intern.

The films combine new video footage of the city, its sites (Oxford Street, Marylebone, Clerkenwell, Whitechapel and UCL itself), sounds, spaces and archives, with expert narration by SoL staff.

Once funding was approved, interns were appointed early in July and SoL staff worked very quickly to plan and arrange the content of the films, which were shot on various locations in London over seven days at the end of July. Cameras and microphones were mostly provided by interns themselves.

This project is the result of imagination, and utilising staff members’ skills and expertise in ways that neither they nor their peers may have considered previously.

It also benefited from a supportive ‘open’ university initiative, and a willingness to divert finance in difficult times to support exciting new proposals.

Though the internships were at first envisioned to last three weeks, with all work from start to finish undertaken in that time, this timescale quickly proved impossible, and work extended in dribs and drabs across two-and-a-half-months.

Editing and reviewing draft films took a fairly extensive amount of this time through August and early September, as did managing interns with varying levels of experience and individual circumstances – plan your timeline carefully and realistically.

The films were designed to make the most of existing expertise and to adapt from site visits made in earlier years, so we aimed to minimise the staff time required onsite. The logistics of site visits were challenging – even when just between one or two members of staff and one or two students – given the importance of maintaining social distancing and minimising use of public transport.

The Survey of London project is one of a kind, and these films are reflective of both the diversity and specificity of the Survey’s research. They are unique in that they provide insight into the people behind the research, giving viewers a sense of being with a particular historian or expert, in a particular place of significance to them professionally.

We are learning so much from having to convert our teaching on the MAHUE and other modules to an online environment, and the films are only one component of our response to this challenge.

Colleagues beyond the SoL in the Bartlett School of Architecture have been very excited by this project and are planning to use the SoL films as teaching resources on their own courses, the ‘Making Cities’ BSc module, and the MSc Space Syntax course, for example – which shows the value they attach to the Survey of London taking its knowledge and expertise into new territory.

This is incredible work - thank you all so much. I really appreciate how much work went into producing these [films] and that it was far from an easy ride. The generosity in creating such amazing resources that can be shared by other colleagues and programmes is outstanding…’ Professor Edward Denison, Professor, Architectural History and Theory, UCL Bartlett School of Architecture, and Director, MA Architecture and Historic Urban Environments (MAHUE)

We look forward to assessing their impact with students but, based on the staff reaction, we would like to make use of them in future. We are hoping to perhaps produce more films, and incorporate them into our teaching when we eventually return to the classroom and to site visits.

We would hope to engage student interns do the same again with more sites next academic year, to build up a catalogue of films for teaching across UCL. In the longer run, fieldwork supported by films will remain an essential aspect of our pedagogy.