My route to Professorial Teaching Fellow

Carl Gombrich on interdisciplinarity, the rewards of teaching and the Academic Careers Framework. 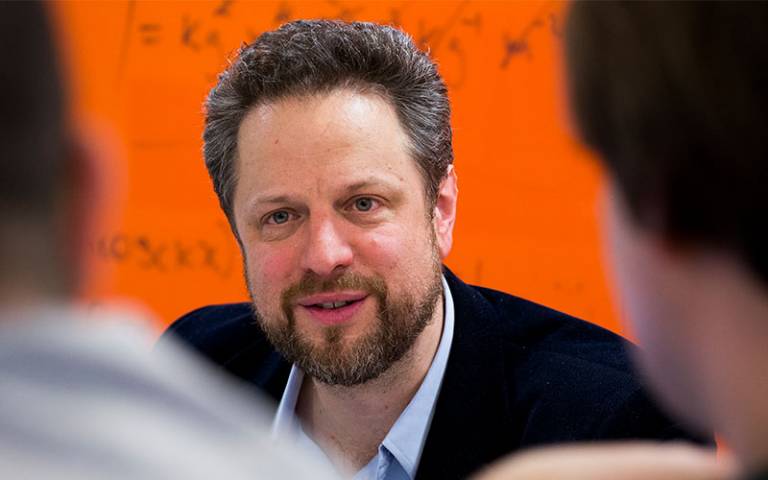 Carl Gombrich is one of six UCL colleagues who was promoted to Professorial Teaching Fellow, a new grade introduced in 2017-18.

Here he tells us about his work as the Programme Director of UCL’s flagship interdisciplinary Arts and Sciences BASc programme and what he thinks of the new Academic Career Framework.

Since 2010, Carl has led the creation, development, launch and delivery of the Bachelor of Arts and Sciences (BASc) undergraduate degrees. The ‘BASc’ was the first degree with this nomenclature registered on UCAS. Its launch in 2012 - with 84 students - was, according to UCL Historian John North, likely to have been the largest undergraduate launch in UCL’s history.

Now with around 450 students, the programme is the largest and most radically interdisciplinary of the new wave of liberal arts and science degrees emerging in the UK and has excellent outcomes in terms of degree classifications, employability and progression to elite postgraduate opportunities.

Why do you think interdisciplinarity is gaining such traction?

We’re in the middle of a knowledge revolution. The modern world doesn’t see any of the boundaries that used to divide the disciplines. No career is untouched by science and technology. Equally, every career in science or tech requires approaches derived from the arts, humanities and social sciences.

How has the BASc curriculum developed to reflect this?

I guess that is answered best in two parts:

At a ‘higher level’ some of the learning is based on such principles as interleaving and active learning, and we have taken full advantage of the internet and new technologies as they develop.

For example we were the first at UCL to roll-out ‘flipped learning’ on a large scale and to make extensive use of objects and UCL collections in our Object Lessons course - led by Helen Chatterjee and Thomas Kador.

Along with Management Sciences we were early in introducing large scale work-based learning initiatives in the form of student consultancy projects, and we were early adopters of different forms of digital assessment.

What has been the main challenge?

Despite lots of good intentions, UCL’s infrastructure at undergraduate level is not well set up to support interdisciplinarity. We have a discipline-based, departmental infrastructure and naturally departments want their own students to have the best experience.

This has led to many instances of different treatment for BASc students.

We have been fortunate that the natural generosity and good will of countless UCL colleagues means that we keep muddling through - with no real disasters to date. But ensuring our students can study the modules they choose is a constant battle we could probably do without!

How is the success of the BASc influencing higher education more broadly?

We were the first BASc in the UK but now Warwick and Brunel also have their own BASc degrees with their particular approaches to the idea.

The concepts behind the BASc are attracting worldwide interest, and I have given keynotes and presentations on the curriculum in India, Japan, China and the US, as well as at many European institutions.

It’s been a wonderful job for me, and our success with the programme has led me to be active in many national ventures, such as belonging to the national Interdisciplinary Curriculum Group and the Liberal Arts and Sciences + Group (for whom I’m writing a benchmark statement for TEF) – as well as being asked to work internationally, e.g. for the Dutch government in an audit of their Liberal Arts and Sciences system and for the University of Hong Kong, who are setting up their own BASc degree.

Employers, too, are more interested in interdisciplinarity and the level of awareness around this concept has grown enormously since around 2010. I like to think this at least in some part due to the graduate success of our BASc students and my many meetings with employers from different sectors.

What’s the best thing about your job?

The fantastic students. They are what keeps me engaged.

It’s a cliché in the sense that all departments say that about their students, but I believe our student are really, really special. That’s important for anyone who teaches.

Just this week I met with two graduates who are doing fascinating things in digital marketing and humanitarian disaster relief, respectively.

You learn so much about the world from talking to students. I think a ‘teaching professional’ has to be about people. You’re not a therapist, of course, but your aim is to bring the best out of your students, to enrich their lives, to help them reach the next stage.  And, of course, they enrich yours.

Building hundreds of relationships with students can be a little tiring, especially as I head into my 50s (!), but every time I throw myself into the conversations – e.g. at our recent graduation ceremony – I emerge inspired and more interested in the future.

I’m conscious that I am lucky to have got this job, in the sense that I don’t have a PhD and that is often a cast-iron requirement to work in academia these days. Sometimes I think that by demanding a PhD we miss out on some great teachers; many great academics and teachers of the past (for example, Sir Isaiah Berlin) did not have PhDs. But then, considering the number of brilliant people in the academic precariat, perhaps we do need to insist on it as a sorting mechanism.

You’ve just been promoted to Professorial Teaching Fellow. What do you think of the new Academic Career Framework?

It was massively helpful. It gave me the confidence that I was applying for promotion at the right level, because I could comfortably tick ninety per cent of the core and specialist activity listed as requirements as well as being able to match the large majority of the examples of impact.

The simple, one page framework was very helpful in giving me immediate feedback that I had a strong application.

Perhaps this is a snotty thing to say – maybe I am more snotty now that I am a professor! – but I hope the Framework is stuck to rigorously, so that the standards set for this new promotion via ‘teaching route’ don’t devalue.

What are your thoughts on the status of teaching at UCL?

I think the Academic Career Framework will make a difference. Dilly Fung [who left UCL for LSE earlier this year] provided strong leadership in this area, making sure that there is a way of appropriately recognising and rewarding the delivery of a great education.

I know our VP Anthony Smith is also immensely supportive and has been working on this for some time.

Nevertheless, teaching very often still comes second, as most senior academics are world class researchers and that is where both their interests and incentives lie.

I don’t know if it’s of interest, but my dad is an academic who was at Oxford for many years and he was passionately against the obsession with publishing in the humanities and arts, believing instead that often the job of an academic is to share knowledge and create a community of learning.

This is one reason I think research-based education is such a great idea. For me it brings back some traditional ideas of scholarship in a contemporary context in which students can be contributory researchers. Which contemporary academic (who has been listening!) has not learnt something new from a student who has done their own research on the web?

I hope the Academic Career Framework will help reward teachers who produce outstanding work in these new ways.

What other achievements helped you to make a case for promotion?

I’m sure that gaining Principal Fellowship of the Higher Education Academy (PFHEA) (through the Arena Programme) put me at an advantage.

It helped me map out and clarify my work and achievements over the last eight years enormously.

However, I must confess this was a painful process! Perhaps the Higher Education Academy (HEA) could take a leaf out of UCL’s Framework here? Currently, the HEA descriptors can seem pretty vague, and it is challenging to know what evidence applies under which descriptor.

I started my application a year before, then gave up. I started again next year then finally submitted in 2017. I was fortunate to have outstanding support from Ros Duhs in the Arena Centre.

What would you say to people just embarking on a university career?