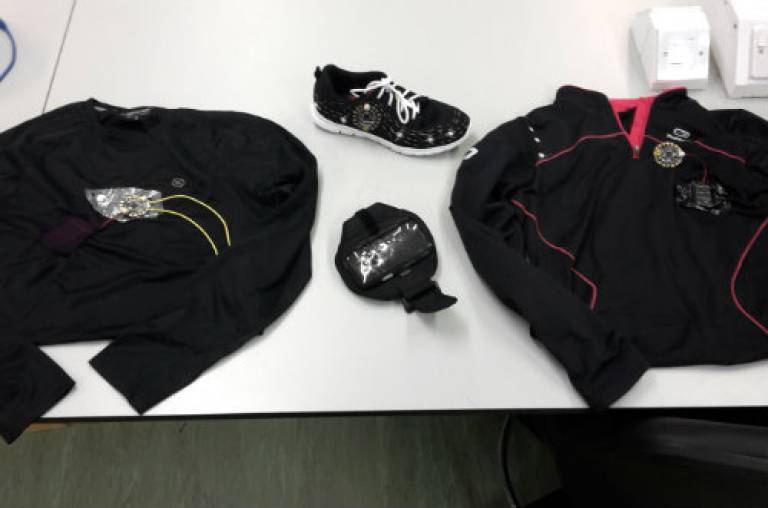 In an Engineering (Biomedical) BEng programme scenario, all lectures stop and students spend the whole week working on a group project (or scenario) where they solve a biomedical engineering problem.

Their brief was to design and build an item of clothing to monitor a marathon runner’s wellbeing and give an alert to inform the runner and all those around them to prevent injury.

Students were encouraged to be creative and develop their own solutions as long as their device met the design brief and was safe.

Jenny provided the students with a range of components, mainly centred on the Adafruit Flora wearable Arduino.

We gave them sensors including temperature and pressure sensors, accelerometers, GPS, UV and light sensors and stretchy conductive rubber. Outputs included buzzers, vibration motors, Bluetooth connectivity and programmable RGB LEDs, but they were only allowed to use up to £40 for materials.

We put the students into random groups and let them loose!

Different approaches to the same challenge

Two groups chose to design their own sensors from scratch to monitor electrolyte concentration in sweat.

They quickly learnt how challenging it is to build a robust sensor! They sewed their home-made sensors into running shirts with conductive thread and used the Arduino to control LEDs based on the resistivity of the sensor. Another group built an arm band to monitor skin temperature. They learnt that packing 10 LEDs, a microcontroller, batteries and an temperature sensor into a package the size of a iPhone can lead to wiring complexities.

The winning group instrumented a running shoe with pressure-sensitive pads to measure gait continuously during the running cycle. They sewed their Flora onto the shoe and daisy-chained LEDs around the shoe with conductive thread. They went shopping to find low-cost trainers which fitted a team member and also gave them something additional to write about in their sustainability analysis.

Working in a team under pressure

Students enjoyed the scenario, some saying this was the first time they’d ever worked as a team under pressure.

They were ambitious and undaunted by such an open-ended task.

Despite one team doing a complete redesign at the beginning of the penulitmate day, project management and budgeting were good even when students were tempted to go over budget.

All worked hard and Jenny had fun leading it, with great support from Eve, the lab technician.

All enjoyed the occasional punctuations from smoking components and whoops of success.

There’s now competing demand for the clothing, with students wanting to take them home to show family and friends and us wanting to hang onto them to entice prospective students in UCAS visits to join us next year.