World TB Day was marked by UCL with its 7th Symposium, held jointly with LSTHM for the 3rd time. Taking the WHO StopTB theme 'Unite to End TB'  the meeting was opened by David Lomas (V-P Health), Peter Piot (LSTHM) and a video address was given by Dr Mario Raviglione (Director, Global TB Programme, WHO).

Please see below for a full programme with videos of the talks and presentations.

Three questions formed the basis of the presentations.

'What is the natural history of TB?' explored the interaction between the tubercle bacillus and the human host using experimental and modelling tools, providing insights from transcriptomic data from both host and bacterium.

'Is there sexism in TB' challenged the audience to consider our preconceptions about the role of gender in  understanding TB data and application of the results to managing the tuberculosis epidemic.

'When it came to 'What does TB elimination mean?' the Chair challenged the speakers to provide a definition of TB elimination. It would be fair to say that this was not achieved, but a stimulating session considered the data available and models that may be used to address this issue.

A highlight of the day was the debate 'Is migrant screening for LTBI worthwhile' Dominik Zenner (PHE) spoke with wit and enthusiasm for the motion and Christoph Lange (Borstel Research Centre, Germany) spoke against the motion, but by skilled rhetoric and with aplomb he managed to convince everyone (including Dominik) that we were all in agreement. Sadly this was not upheld by the show of hands! We learnt more about TB in the migrant community than we did about public votes.

Approximately 300 people attended the event with a further 500 following the live stream. This meeting, as always, reaches out to the whole TB interested community with clinicians, researchers, policy-makers, students and members of the public all represented in the audience. 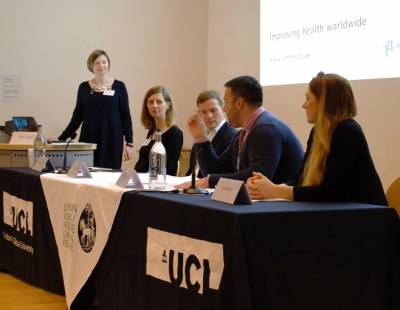 The full day's programme was as follows.  Click on the links to watch the individual talks and presentations, or the sessions in full.