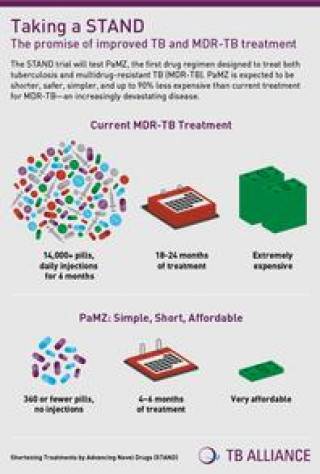 Although some progress has been made in recent years in controlling tuberculosis (TB) globally, TB has remained a persistent problem in the developing countries of Africa, Asia and South America.

The current first-line antituberculosis agents have been in use for over 40 years and are relatively ineffective in controlling TB as a public health problem because of problems with poor treatment adherence.  Drug resistance is becoming more common and fears of an epidemic with virtually untreatable strains of TB are growing.  Since the discovery of the rifamycins, and their introduction into standard antituberculosis regimens, very few new classes of drugs have been evaluated with a view to their registration as antituberculosis agents.

The STAND trial, which is funded by the Global Alliance for TB, is a phase 3 open-label partially randomised clinical trial to evaluate the efficacy, safety and tolerability of a new regimen which combines moxifloxacin plus a novel agent, pretomanid, plus pyrazinamide given for 4 or 6 months of treatment. DS patients will be randomised to one of the pretomanid containing regimens or a standard control regimen. MDR patients will be enrolled and treated for 6 months on the higher dose of the pretomanid containing regimen.

Enrolment to STAND was paused in late September 2015 following a meeting of the DSMC.  At this time 284 patients had been enrolled.  A decision was made in December 2016 not to re-start enrolment in STAND; however all  remaining study participants are continued to be followed to the end of their planned scheduled follow-up. Last patient last visit took place in October 2017 and results expected early 2018.