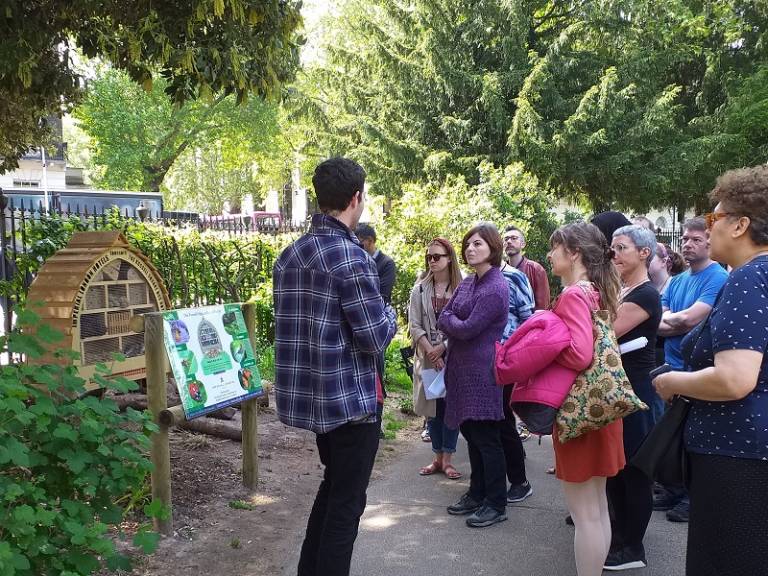 Inspired by Sustainable Impact, I wanted to share the experience with others across UCL as part of a group – however, as my knowledge of birds is very limited, I contacted the UCL Sustainability team in March 2017 to ask if they would lead a lunchtime walk around Queen Square

Evan Landy a colleague in UCL Sustainability kindly agreed, and we promoted the walk via UCL’s Sustainable Champion network and the Library Services’ mailing lists, posters, twitter and Sustainable UCL calendar. The walk publicity proved perhaps too successful as we had over 30 people join us!

Unfortunately, Queen Square birds – except pigeons – proved rather elusive. Which was disappointing, as we’d seen herons in St George’s gardens on the walk School of Pharmacy organized earlier in the year.

Luckily, we continued the walk into Russell Square, where we saw a Firecrest - a first for UCL!

The following year, as Evan had left UCL, I approached Lucas Von Chamier (UCL Conservation Society) to ask if he could lead a lunchtime walk for RSPB Big Garden Bird Watch in January – in addition to their regular Friday morning walks. I suggested that we take his usual route – including Gordon and Russell Square – rather than try Queen Square again.

Turnout was slightly lower that year – possibly due to the weather – but the rain held off, and we saw (and heard) a lovely little goldcrest, a wren and several robins, as well as some long-tailed tits. I brought along copies of the RPSB Bird identifier list, and flyers for Lucas’ future bird walks, and we reported our findings into the RPSB Big Garden Bird Watch

This year, Lucas has led another lunchtime walk for us as part of the RSPB Big Garden Bird Watch in January, as well as one as part of IoN’s Mental Health Awareness Week in May.

Lucas said of the January 2019 walk

“…. that was an exceptionally good walk for this area. So, you got really lucky. I am very pleased myself. I hope everyone enjoyed it. Thank you very much for advertising this. It was good fun. …”

As usual, we promoted the walks via the Sustainable Champion network and the UCL Library Services’ mailing lists, posters, twitter, and also IoN intranet and mailing list for the May walk, which had the largest turnout ever – possibly due to the weather, which saw many people sunning themselves in the Squares as well as the birds!

I don’t insist on RSVPs – so I’m never quite sure how many people are going to join us – I would rather keep it flexible, but I appreciate that I’m not the one leading the walk, and it can make it hard to corral us all/hear everything at the back.