Exploring the impacts of agricultural expansion in Africa

Experts from UCL’s Centre for Biodiversity & Environment Research is working with 10 research teams in the UK and Africa to explore trade-offs needed to achieve ‘zero hunger’ in sub-Saharan Africa. 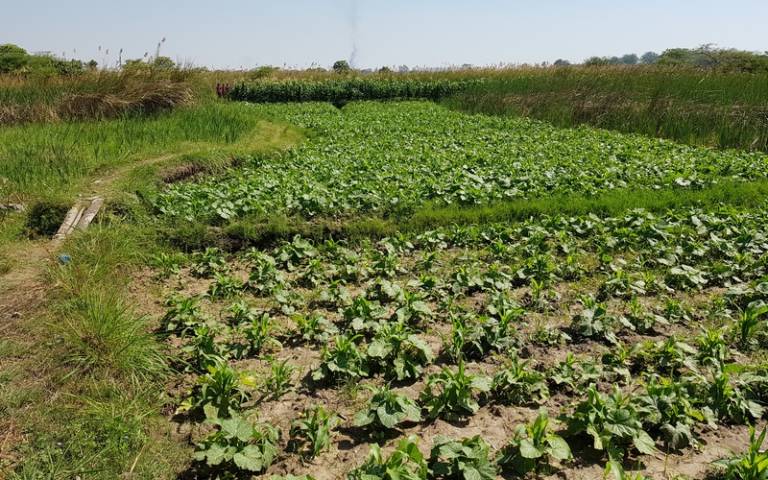 Photo caption: “Kitwe, in the Copperbelt province of Zambia, is the second-largest city in Zambia. Horticultural producers near the city make an important contribution to food and nutrition security of the urban population. But in recent years, deforestation as a result of agricultural expansion and mining in the upper catchment of the Kafue River has contributed to flash floods and erosion, endangering the livelihoods of urban vegetable producers and consumers”.

A global collaboration is assessing how increased land use for agriculture will impact biodiversity in sub-Saharan Africa.

The research is part of Sentinel, a cross-disciplinary project team involving 10 research teams in Ethiopia, Ghana, Zambia and the UK, led by the International Institute of Environment and Development (IIED).

“Sentinel is helping to raise awareness and inform the debate around the issues. The project allows us to pool knowledge, develop local capacity and find workable solutions.”

The UCL team is using spatial and statistical techniques to map land-use in sub-Saharan Africa and analyse the potential impacts of agricultural expansion on biodiversity in the same region.

“We combine site-level fieldwork with large-scale, country-level data sets and modelling to explore how land is used now and in the recent past, and make projections for how it might be used in future,” Dr Newbold explains.

“Biodiversity makes important contributions to the food system, supporting agriculture through contributions such as pollination, natural pest control, and soil improvement,” says Dr Abbie Chapman (CBER), Sentinel Project Postdoctoral Research Associate. “Our research is adding vital evidence to debates around the trade-off between agricultural expansion into forest and other natural habitats versus the need to protect ecological services and biodiversity.”

The Sentinel project engages with policymakers and other stakeholders to assess the impacts of agricultural expansion, what drives it, and who wins or loses from it.

This evidence-informed dialogue is vital if we are to achieve zero hunger, while at the same time protecting natural habitats and reducing social inequalities around the world,” adds Dr Newbold.

Goal 1: End poverty in all its forms everywhere

Target 1.2 By 2030, reduce at least by half the proportion of men, women and children of all ages living in poverty in all its dimensions according to national definitions.

Target 2.1 By 2030, end hunger and ensure access by all people, in particular the poor and people in vulnerable situations, including infants, to safe, nutritious and sufficient food all year round.

Target 15.8 By 2020, introduce measures to prevent the introduction and significantly reduce the impact of invasive alien species on land and water ecosystems and control or eradicate the priority species.