London vs Birmingham - Where would you choose?

Take a look at our two chosen cities for graduates - London and Birmingham. Here we try and find out which city is better for our graduates to be in. Read on to find out who wins! 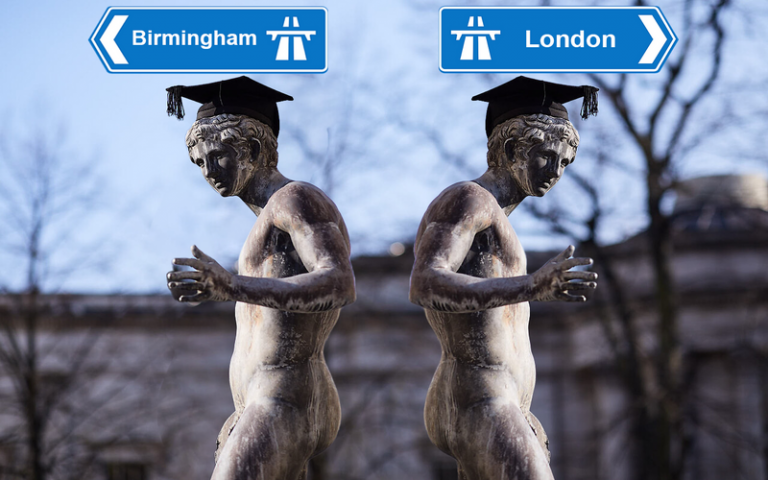 On this page you will find out more about the following areas in London and Birmingham:

So you've graduated with a killer degree, confidence is at an all-time high. Once you've let everyone under the sun know you have finished your degree and you've taken the pre-requisite 1 week of chilling or partying or whatever it is you do to give yourself a pat on the back... you might start to wonder what to do next.

More specifically, you might start to wonder where to go, in order to then think about what to do next.

As an international student, your options are usually as follows:

...come to think about it, those options are pretty much the same for everyone.

Anyway, should you choose to stay in the UK, you're then faced with another choice. Believe it or not, there are other cities in the UK besides London. And believe it or not for a 2nd time, they're actually pretty cool. But are they better than London?

With the usual mixture of subjectivity and objectivity, this article is going to let you know. Now, we could give you a quick breakdown of every major city in the UK but we think it's better to present a detailed, single viable option for you, which will come in the form of the UK's 2nd biggest city, Birmingham (don't even try it Manchester).

Cost of renting a single room per month

On average, 32% of your salary in the UK will be spent on rent so this is a pretty important factor.

No surprises that London is more expensive but that is a pretty big difference. Nearly £300 extra per month for the privilege.

Average salary of a university graduate

As much as people, and possibly even yourself, will try and convince you that money isn't the most important thing in the word... it kind of is. As soon as you graduate, you want to start getting some decent paycheques so that you can look half decent on social media.

So the difference here is a lot smaller than the rent in terms of percentage. Judging by just the top 2 criteria, it may be worth heading to Euston Station and hopping on the first train to New Street Station, Birmingham. Nonetheless, for graduate salaries...

Of course, after a year or so you cease to be a graduate. So what about the average salary of all people in the 2 cities?

So this is where the pay benefits of London start to become more apparent. Staying in London longer term can see a significantly bigger increase on average. Although, that average won't cover the difference in rent cost. Still...

Cost of food and drink

Do you mean going to Aldi for a gigantic shopping trip or having a pint/coffee at your local? Well, let's take a look at both.

BBC's Reality Check team confirmed that the UK's major supermarkets operate national grocery pricing, meaning that there isn't really a difference between a big Sainsbury's in Birmingham and London. However, prices do differ if you compare a big supermarket to a local version. So, as long as you don't do all your shopping at a Tesco Express you'll be fine.

But what about the cost of a coffee at Starbucks? More specifically, an Americano:

How about a pint of beer in a pub?

A takeaway BigMac from Mcdonald's, delivered by Just-Eat?

So, if this was your day out, it would be £3.93 cheaper in Birmingham.

Getting a job after graduating is probably the next big thing for many. It's important to have a good level of understanding about what your city has to offer you in terms of employment, to help you find those opportunities out there. Take a look at the figures below that we've found to give you an idea of this = please note, these figures are prior to the pandemic (2019).

There is an 11.5% difference in the average employment rates between London and Birmingham. The average for Great Britain overall is 74.9%, which evidently gives London the win!

You may be done with education now but what's to stop you from going back for more? Take a look at the educational opportunities for further studies amongst the two cities and what each one has to offer you.

Verdict = (is this subjective or objective..?) London wins!

Efficient and most importantly, cheap transport is a must for new graduates, especially as it's very difficult to drive around within the city areas without avoiding the extra charges and crazy traffic.

Unfortunately, Birmingham isn't home to an underground transport facility, however they have a wide chain of over ground services. Compared to Birmingham, London has many more international travelling avenues to make it easier to go abroad (also gives you more of an excuse for a holiday!). Although Birmingham is cheaper, you're down one less means of travelling without tubes in Birmingham and only have one airport you can directly travel from... so where do you think would win this one?

This is a big deal for all cities around the world and lower pollution levels can be the sole reason that some people choose to move.

Looking at micrograms per cubic meter air or of the 5 main criteria for pollution levels in the air:

Which ranking did each city get in the Air Quality index in 2019? (higher is worse)

So... this one is pretty close. If you're just moving for the sake of pollution, i would try the Scottish Highlands.

When you're not working and sleeping, you're probably going to want to have a little fun.

So as we all know. London has a million +1 things to do and see, but don't ignore Birmingham as there's still a lot of fun to be had. Below we've picked out some of the most popular places of different activities and entertainment:

Chocolate exhibits: (because this is important.)

Judging by the various number of criteria we've looked at to compare London vs Birmingham, it looks like quite a close score in certain areas but... we can really only award this to one city.

So, not including the draw, we score that as:

OK, we realise that this having being written by University College London, some may not consider this the most impartial article ever. But we've genuinely written this with the intention of highlighting how good both cities are.

Birmingham, like so many other cities around the UK, has so much to offer a young international graduate. London is always going to be top dog but when you're coming to the end of your time at UCL, do consider heading on over to Google Maps and looking north, south, east and west of London... even if it is just to then get a share room in Hackney Wick!