Living in London does not need to break the bank! Follow Judah's wise advice and you'll still have a few £s to rub together at the end of the month. 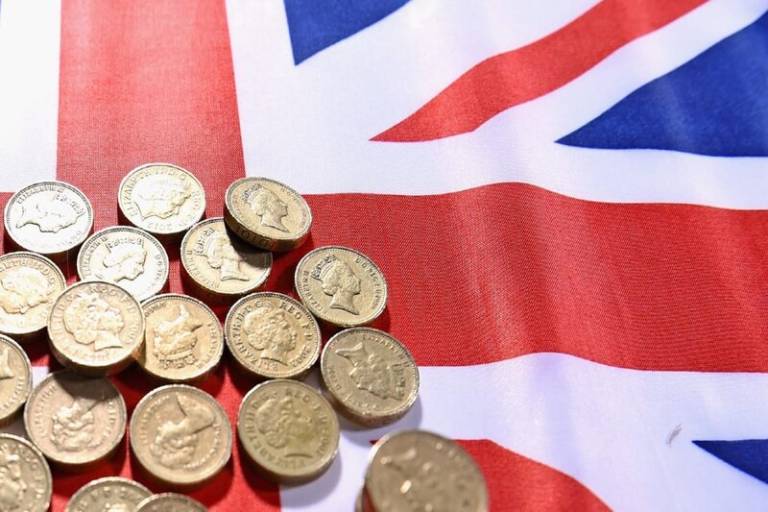 London can be expensive.

It can be so expensive that I could eat quintuple the amount I eat in Jakarta for the amount I spend in London; is quintuple even a word? Okay, maybe I’m exaggerating. But you get it. It’s crazy that eating out can, on average, cost £15-£20. Fret not – it doesn’t have to break the bank to live in this pretty, not-so-little city, called London.

September 2021 was the first day I stepped foot in the United Kingdom ever. Didn’t have a bank account until a month after arriving. My dad gave me an envelope of cash, sent me on a 15-hour flight, and there I was.

It can be quite intimidating to move to a new country or city – believe me, I know from personal experience. But that’s why budgeting and keeping track of your expenditure is key to succeeding in your personal life as well as your academic life.

Unlike other articles about budgeting, this one will give you actual numbers, a template spreadsheet, and full examples of how much you’re likely to spend in London. I’ll be as real as I can – giving you both the times I did amazing and stayed within budget, and the few times I overspent on drinks & the best sushi you can ever get in London (it’s at Roka btw). You’ll see the good, the ugly, and the pretty decent months of uni budgeting to give you the most realistic view of how to succeed.

I’d like to also note that throughout my first year of university, I funded every living expense - aside from my accommodation fees – by myself. Yes, including those fun weekend getaways and reading week travels. I did this by working as a part-time online instructor and many of my friends funded their living expenses in similar ways. And as I’m writing this on my plane back to Jakarta, I’ve still got quite a bit left in my UK bank account as I didn’t spend all that I earned each month. Let’s walk through the 4 important lessons about budgeting in London:

1. Track your spending with a spreadsheet

My friends say I’m insane for doing it but I think it’s the most effective, skill-multiplying activity you can do in your personal life. While there are quite a few really nice apps you could use to budget such as Plum, Monese, and Moneyhub just to name a few, nothing beats a simple excel spreadsheet that tells you exactly how much you spent each week, in each category, and whether or not you stayed within budget in a given month.

Oh – and you get to use these skills in literally every other thing in life – in your career, in UCL student clubs if you make it into the committee, etc. Excel is an incredible organizational tool for budgeting. Let me show you how I use it:

I’ll give you a quick, 4-bullet point pitch as to why I love this strategy:

If you’ve got any questions about it (or anything related to this article, hit me up on LinkedIn: https://www.linkedin.com/in/judah-purwanto/

At this point I should become Monzo’s brand ambassador because I’ve given them a shoutout in a previous UCL article (doing it again now though).

If you didn’t know, Monzo is a UK-based digital bank that shows you how much you spend in a month and when you should be spending less/if you start spending more in a given month compared to previous months. The app is also super easy to use for splitting payments & doing all that necessary stuff when you’re a uni student.

I’m recommending Monzo mainly for its ‘pot’ feature – where you get to allocate a certain amount of money into a ‘pot’ that remains untouched until you take money out of it. While some of it accumulates interest, rates are pretty low overall and you’re probably better off investing in mutual funds (not right now though – worldwide stock markets go boom).

For myself, I use the pot feature to set aside a specific amount for every given month. I allocate about £400  for living expenses in a given month. The rest of my money, I put into a pot that I don’t touch. So, whenever my monthly paycheck comes in, I strictly leave only £400 in my main account. The rest of the money goes directly into the pot – I don’t touch it. This method works really well as it gives you a visual for how much money you actually have left within your budget in a given month.

3. Get a part-time job! But don’t sacrifice school for it.

This one will be rather short. I only work about 10 hours a week (12 hours maximum). UK law states that students on a student visa are only allowed to work a maximum of 20 hours during term time, and I honestly don’t recommend working an entire 20 hours as it is very likely to burn you out. If you can handle it, that’s awesome! For most of us, we probably can’t.

That’s why I recommend doing part-time work to the extent that it pays for your monthly expenses (and maybe slightly more if you’re into investing that money like I am). But remember that you’re working part-time for a reason – to finish university and get a full-time job that aligns even better to what you really want to do. I love to tutor students about debating, but am also very interested in hanging out with friends, learning about the career path I’m interested in, exploring London, and binge-watching Bridgerton & many, many other shows.

Obviously, this might not apply to those of us in different financial situations, and I’m not saying it does. So please take this advice with many grains (perhaps a bucket) of salt. The bottom line is: university is a time to learn, to make friends, and to live life the way you want to. Enjoy it!

I’ll tell you a story about my friend - let’s call him Jeremy Bentham (his name isn’t actually Jeremy Bentham). One time, Jeremy’s parents hadn’t sent him money for next month’s living expenses. As a result, he had 3  left for the last 3 days of November. This happened, despite both of us budgeting a similar amount per month – £400 .

I obviously paid for his lunch when we were eating at the UCL canteen - it would be quite mean if I didn’t. But the lesson here is that you can very quickly run out of money if you don’t track your money section some off for emergencies and if you don’t use Monzo (I’m kidding). But I am serious about the ‘spending a bit and spending more later’ method. There are two principles you can live by when it comes to budgeting:

This is mostly a psychological tip. By preparing for emergencies and by spending less now and spending more later, you’re more likely to stay within your budget.

There isn’t a singular, “right” amount to spend in London. It really all depends on what you’re able and willing to spend. It’s possible to spend anywhere between £200 – £1000+  a month. But you don’t necessarily need that much to have a good time here. Try setting a goal for yourself, and use your first month or two at UCL/London experimenting. You’ll get a better sense of your spending habits this way. If I didn’t spend that much on Warren Street bento boxes, I’d probably be able to spend only £300 a month. But that won’t happen (realistically), so I’ll stick with £400 right now.

Notably, the UK has been experiencing an unprecedented rate of inflation, spending habits change, and your living situation will fluctuate. Things happen. And it’s OK to not be amazing with your budgeting all the time – especially when many things are so uncertain currently. Sometimes you underspend (see Figure A), and sometimes you overspend (see Figure B). 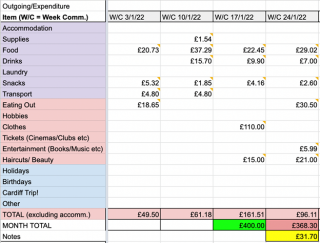 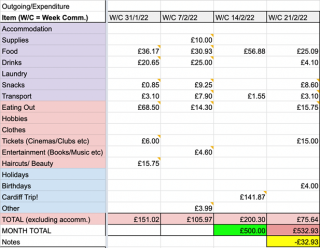 London is a great place to be, and an even better place to study in.