The history behind UCL

In this article, we give you a very brief history of UCL and the traditions on which it was founded. 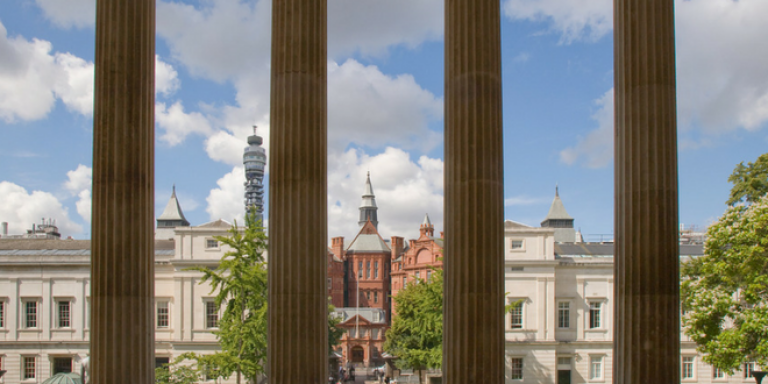 Having made the decision to apply to UCL, you probably already know a little bit about the university - and even if you don’t, a little knowledge can go a long way. If nothing else, when you're able to arrive on campus, it will be helpful to know who that dead guy in the box in the South Cloisters is, and why exactly he’s sitting there.

The Founding of UCL

The founders of UCL were inspired by the radical ideas of philosopher Jeremy Bentham, who some people see at UCL’s ‘spiritual father’. Bentham (or Jezza B., as he is affectionately known) is kept as an auto-icon sitting on a wooden cabinet at the end of the South Cloisters.

Following the founding of UCL, construction of the famous Main Building began on Gower Street in 1827. It was designed by architect William Wilkins, who also designed the National Gallery building in Trafalgar Square in 1831 – both very similar and iconic examples of English architecture. The completion of the Main Building, now known as the Wilkins Building, was some 158 years later in 1985, with a formal opening ceremony by Queen Elizabeth II.

In 1893, UCL established its own students’ union, claiming to be the first University institution in England. Today, the Union runs over 200 clubs and societies for its members, including sports, debating, languages, music, drama, politics, and film. UCLU Film Society is one of the oldest societies in the country, over 65 years old.

Since its founding, 29 Nobel prizes have been awarded to UCL academics or students, the latest addition being John O’Keefe in 2014 (Medicine).

We look forward to you being a part of UCL’s global legacy!