Orlando explores what it is to be Lillois and finds a new found appreciation for the sky! 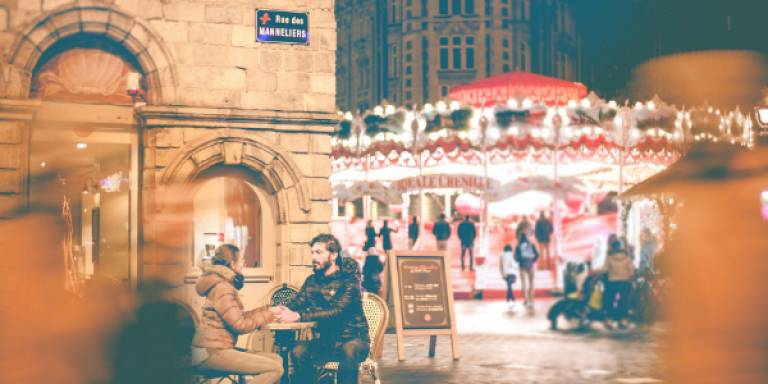 A couple of months have now passed since I sat down to write of my arrival in Lille. That first blog detailed the acute sense of separation that took me by surprise, and some of the tentative efforts I made to remedy it and find a community away from home. But although my account of the inevitable isolation that accompanies a move abroad was entirely genuine, I didn’t mention that I was writing in the exact location from which I had felt so remote: England. Yet again, chance would have it that my more recent experiences are recounted from the objective perspective of several hundred kilometres. Being a teaching assistant I benefit from frequent holidays unavailable to other professions, time that I later hope to fill with more exotic expeditions but has lately afforded me an extended festive break with friends and family. So once more, I will focus on my foreign endeavours from a homely distance.

The first weeks I spent in France were marked by much movement, within Lille and beyond. Of course there were plenty of practicalities to keep me occupied, be it familiarising myself with a new travel network or coming to terms with the notoriously convoluted bureaucracy that plagues even the most basic procedures – such as buying a SIM card or signing up to a library. Put simply, I was caught up in the same quotidian complexities we all share, but had to solve them by new and alien methods. I have yet to describe the details of my job but needless to say, directing a class of up to 30 adolescents was an unfamiliar task that demanded my undivided attention. There were hundreds of moments in the classroom or everyday encounters that amused me or threw me and together reminded me that I had a long way to go before I really settled in France. In addition (and as documented in my first blog), I was spending many of my weekends away from Lille to compete in bicycle races; an enthusiasm that introduced me to a host of new friends and unexplored cities but distracted me from the vital (if less thrilling) process of adjusting to living in France.

Following my half-term break in England, I was welcomed back to Lille by shorter days and worse weather. Hardly an escape to the Tropics, I knew I wasn’t decamping to a suntrap when I decided to work in northern France. All the same, I felt the seasonal changes more acutely than when I had lived in London. Owing to the flatness of the region, la capitale du nord seems shrouded in a monotone grey throughout the winter months. And whilst a perennial blanket of clouds is by no means unique to Lille, I believe I was more sensitive to it than previously because of the level landscape that stretches unbroken to the horizon. For those who have never visited what we succinctly refer to as the ‘Low Countries’, it can be difficult to conjure to mind a vision of un-undulating terrain. For many, ‘England’ evokes scenes of rolling pastures interspersed with wooded thickets and other such features to divert our wandering gaze. I tried to explain this to a Lillois friend one overcast afternoon. He became increasingly bemused as I waxed lyrical about the green and pleasant valleys of my childhood until, exasperated perhaps, he cut my monologue short. He argued that I was completely missing the beauty of the north and should be looking up rather than down.  The sky, he reasoned, should attract the eye, not the ground. And when 50% of any view is sky, he affirmed that there is no place better to appreciate the spectacle of atmospheric alterations than the North.

This glimpse of the resident mentality was quite a revelation. ‘Foreign’ is a state of mind and it occurred to me that in order to truly assimilate into Lille, I would have to think like a local. My French teachers had for years been encouraging me to think in French rather than in English, but I had only ever understood this advice in a linguistic context (ie. it’s more natural to think and speak in French rather than thinking in English and trying to translate this into French). I realized that the barriers between nationalities are not only external and superficial, overcome by mastering another language; there is a deeper cultural divide that prevents us from integrating into new societies that can only be spanned by empathising with people who live in that area. If I am to make Lille my home, not only should I try to improve my French (albeit with a ch’ti – France’s answer to ‘scouse’ – inflexion) but I should also try to suppress my English impulses and behave like the good folk I meet every day. Whilst I don’t pretend that such imitation will fool anybody that I’m a bona fide Frenchman, being attentive to regional habits, turns of phrase, and peculiarities has brought me closer to the people around me when I was most alone. So as I prepare to once more cross the Channel after the Christmas holiday, I look forward to further reducing the space between myself and the strangers who are becoming friends.