Over the winter break, Angelos explored New York as well as his interest in photography. Read on to hear how he is expanding his skill set and broadening the scope of his academic studies while abroad. 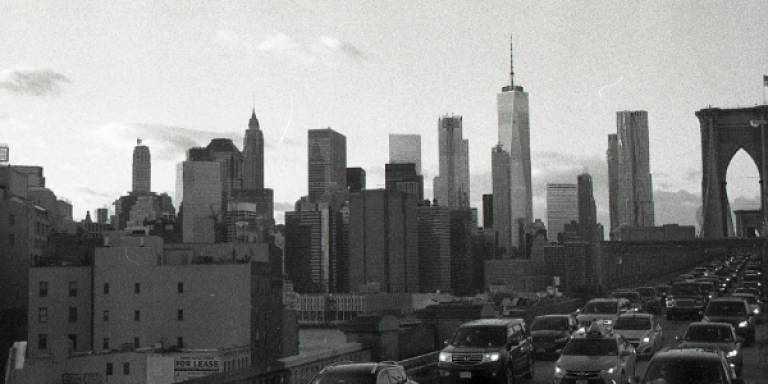 I think that for a lot of people going through university, uncertainty with regards to our future career path is perhaps one of the major factors causing anxiety. Personally, I went into university as a physical geographer but I am currently particularly interested in working in the arts. Whether that would be in the film industry or at a museum I do not know yet and I am not even sure if this is just a phase that will eventually fade away. However, I know that as a person I cannot constrain myself in terms of what I am genuinely interested in, even if that means that I end up being a jack of all trades but a master of none. Therefore, I am embracing the multifaceted nature of my identity and I am seeing my year abroad in University of Toronto, as an opportunity to broaden my academic curriculum specifically to include art history, cinema studies and photography courses.

After having completed a “Photography 1” course and working with a film camera for the first half of the fall semester, I was very excited to shoot film in my winter break. Being a mere 12-hour bus ride away from Toronto, I went on a trip to New York City with a good friend of mine and I carried around a Kodak disposable camera (with a Kodak Max Versatility Plus 800 colour film) and a Nikon FM10 (with an Ilford 400 black & white film). We stayed in the city for six days and it was buzzing with life. The saying that New York City is the city that never sleeps was true since even behind the walls of our hotel room we could still hear cars and sirens late at night, making them an integral sonic element of the dazzling urban fabric. It was surprising to see how the metropolis that epitomises the peak of capitalist consumerism was not as “modern” as it is usually perceived to be. The old public transport infrastructure alongside the large number of skyscrapers that were built in the 20th century, give the city a sense of history deeply embedded amongst more contemporary buildings towering above one’s head. Generally, the soaring height of most buildings provides more space for architects to experiment with eye-catching designs, that create a very iconic skyline.

The most shocking aspect of the city was the large number of homeless people sleeping in the streets of Manhattan and inside subway waggons. It is so easy to make yourself immune to the sight of homeless people in New York City just to avoid accepting the falsity of upward social mobility that the American Dream promises to the masses. In a way, being able to live and survive in New York City requires you to be brutally individualistic at times. The notion of individual freedom that is so famously represented by the Statue of Liberty masks and hides an underlying obedience to the forces of capitalism.

Overall, the trip was a great experience and an opportunity for me to practise my photography skills a bit more. This coming semester I will be taking a “Photography 2” class since I felt that the “Photography 1” course allowed me to explore my creativity and gain new skills that might one day prove to be very useful in terms of pursuing the right career for me. I am still unclear as to what I want to do and new options have been put on the table, such as working in the film industry, which is stressful in terms of not feeling qualified enough to pursue my interests. However, I remind myself that I should view my anxiety about the future as a marker of privilege of having enough options to choose from rather than it being caused by lack of opportunities. Therefore, I am glad that this year abroad has given me the freedom to further broaden the scope of my academic studies and gain new practical skills.