From Uber rides to train journeys, Brian continues to meet interesting characters as he navigates his year abroad in Moscow. 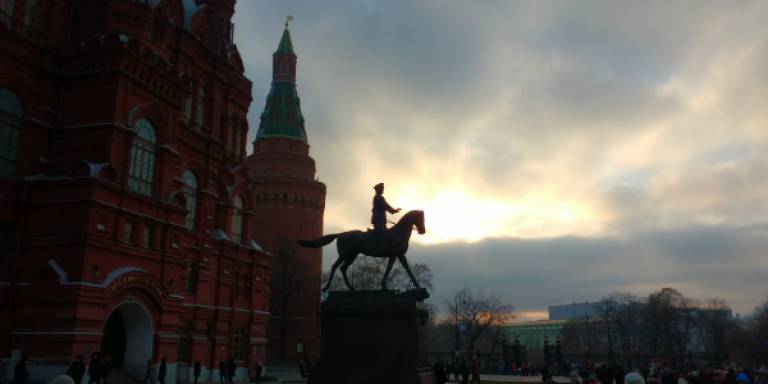 I’m sat writing this in my parents’ house in Sussex, two days before New Year’s Eve. I’m enjoying the luxuries of having my own bedroom, a sense of privacy, and direct sunlight. I’d like to be able to shock you with stories of swirling blizzards and snow six foot deep, but alas, Moscow has so far been enjoying balmy highs of 1-3°C despite earlier snowfall. Still, I’m told by reliable sources that it’s generally between -15°C to -30°C in January. So, perhaps blog three will be rife with jaw-dropping tales of snow angels, avoidable frostbite, and a guide of how to throw a snowball at the Kremlin without being charged with espionage and forced to carve Russian dolls in Siberia for twenty years.

Since writing my first blog in October, a lot has happened. I’ve been to a Russian house party that gave American Pie a run for its money; learned that in the Russian academic process both Turnitin and author anonymity are foreign concepts; and largely had a great time. A lot of that has been down to the friends I’ve made, the people I’ve encountered, and the stories those encounters have provided.

Taking Uber, I’ve met some great, memorable characters. An older Armenian man, using a cracked CD laid over his number-plate to thwart speed cameras, cackled when I said I was from Moscow, wagged his finger, and tritely confided that my ears were too big.

In the driver’s seat have sat a homesick guy from Siberia sending money to his wife and two kids back East across multiple time zones; and a Dagestani local who stressed the importance of Russian in navigating a region of more than twenty distinct languages, and how touching a single woman could mean triggering a betrothal or a blood feud: but usually not both.

My favourite however, was a young Afghan guy who after getting into the car asked where we were from. Upon hearing the answers, he jabbed his thumb at himself, grinned broadly, and said:

Trains are also a great way to meet Russians as the open carriages force interaction between passengers: sometimes with hilarious consequences. For example, on a train back to Moscow from Kazan, an older lady induced a Scottish friend to hum popular show tunes with her, in between pressing him to eat more potato whilst I tried not to die of laughter. Similarly, despite being forbidden, beer and vodka flow freely on most journeys, with predictable consequences.

My dormitory is also a brilliant cultural melting pot. The babushka of pistol-threatening fame in my previous blog, for instance, is from a region of Western Russia which is actually a centre of Buddhist culture and worship. On my floor, on my side alone, live two Brits, my Congolese roommate, four Germans, two Finns, an Azeri, an Australian, a Turk, a Russian, a Bulgarian, a Brazilian, a Belgian, a Georgian, a Bosnian and about fifty Italians. There’s probably a partridge and a pear tree in there too… Sadly, many of these beautiful, fabulous people were in Moscow as Erasmus students for the first semester only, and will have left for warmer climes and greener pastures by the time I have returned. It’s hard to say goodbye, especially after sharing so much love and laughter.

I, on the other hand, have seven more hard-earned months left on my visa. Whether I will spend them wisely, is a different question. Stay tuned.