Dr Chowaniec (also a Visiting Professor at Andrzej Frycz-Modrzewski Kraków University in Poland), aims at presenting the multifaceted character of gender perspectives in Eastern Europe through the comparative dialogues, in which research on politics, class, race, education, body politics, queer theory, history and culture can meet.

The seminars have started in October 2016 with the seminar of Abortion, Body Politics and LGBT in Poland, with Marge Berer from the International Campaign for the Right to Safe Abortion and prof. Marzenna Jakubczak from Kraków. In May, Dr Urszula Chowaniec went to Helsinki with a special one-week course Gendering Eastern Europe, run at the Aleksanteri Institute at the University of Helsinki. The course was based on the project Impacts of Gender.

In June 2017 the project organized a series of seminars under the title: "Gender/queer and art/lit/film in the other europe : vulnerability, precarity, and fear in the uk with a “brexit phantom"

The Dream of a Common Language in 20th-century Queer Stories: Cultural History of Women’s Emancipation from the Non-Heteronormative Perspective (Eastern European Lessons). The book aims to scrutinise the emancipatory women’s movement in culture from the angle of non-heterosexual narratives in 20th-century Poland, and through the comparative perspectives of alternative sexualities’ culture in other Eastern European countries and selected Western countries.

Special thanks to Małgorzata Dawidek Gryglicka for granting us right to use her artwork as a leading image for Impacts of Gender Project. 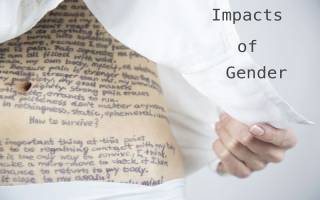