“We should now gather as Serbs, to become workers again”: labour, morality and national redemption in neoliberal Serbia 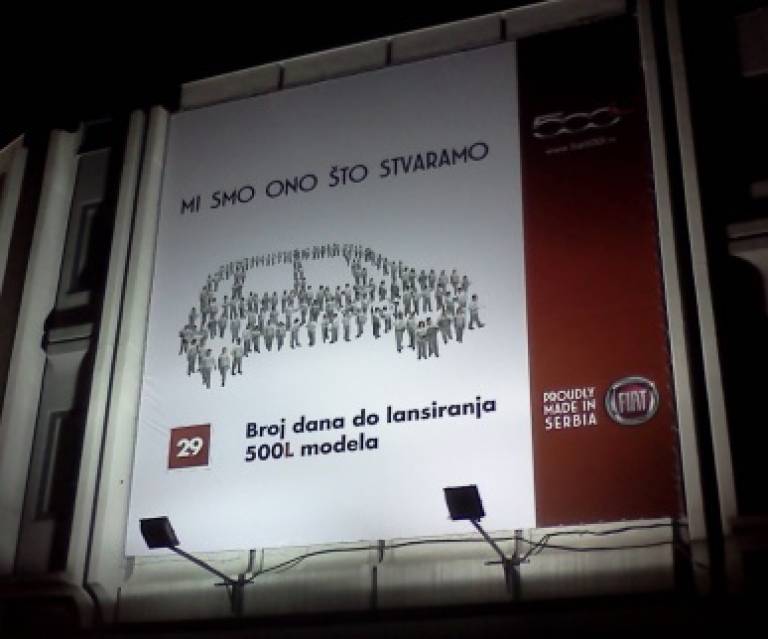 In May 2013, a curious episode of national shame shook the Serbian public. Several blue collar workers of FIAT’s new factory in Kragujevac, the news reported, dissatisfied with their manager’s treatment and the lack of smoking breaks, damaged about thirty new vehicles. They did this by carving angry messages onto car surfaces, using screwdrivers. And while the FIAT’s management was exploring the affair, the media commentators united in condemnation of the protesters and an utter moral outcry. “What will Italians and other foreigners think when they hear of this?”, a reader of the B92 portal asked, in one of the most positively evaluated comments. He added that workers should be grateful for having a job at all, and “greet every car with love”.[i] Others expressed their indignation with what they saw as a ‘lazy’ and ‘spiteful’ Serbian mentality, fearing that it may drove FIAT away to other countries. Later on, Serbian Prime Minister addressed the affair by calling for a change of “consciousness, even subconsiousness” in relation to work. “We can’t advance if we brag about scratching the very cars we are making”, he claimed.[ii]

The affair brings to attention the intense remoralisation of labour currently undergoing at various scales in the Balkans. A popular consensus is that Yugoslavia’s collapse and the subsequent wars have been significantly shaped by nationalisation of class struggles. “They gathered as workers, left as Serbs”, as an oft-cited remark of a workers’ strike in 1989 put it[iii]. Based on an ethnographic research done between 2011 and 2013 in Kragujevac, Serbia, a home of an iconic Yugoslav industrial giant Crvena Zastava, I show how this connection between national and class identities has recently become rearticulated in neoliberal environment and geopolitical dependency. When recalling how the car factory was managed in the past, Zastava former workers appropriate its demise and subsequent privatisation by FIAT into a common local theory of self-abandonment - a notion of the problematic national 'we' that constantly mishandles its own common good. Repeated destructions of the town and its material well-being – from local Nazi massacre from the WW2, through certain problems with social property in self-managed socialism, to the defeats in the 1990s wars and the corruption affairs in the post-2000 state – all get attributed to a supposedly flawed local mentality doomed to squander its own well-being. In local stories about Zastava’s ruin, this gets expressed in sayings “workers ate their own machines” and “we don’t care for our own”.

I argue how such self-denigrations illustrate an old yet under-elaborated feature of balkanism, a trope of the supposedly more socially strong capitalist West. As Maria Todorova’s showed in her Imagining the Balkans, the region has been continuously perceived as an internal other of Europe, between modernity and backwardness, and a site of ‘weak states’ that are unable to achieve sovereignty and the rule of law. However, the talk of liminality and ‘weak states’ was historically preceded by an older political dichotomy on polis and ethnos, or, in modernist sociological imagination, of an entire evaluative hierarchy of different levels of social integration between ‘strong’ and ‘weak’ societies. Here, modernity is imagined not a point of fragmentation, self-interest and anomie from Durkheim’s writings, but of increasingly cohesive community, even corporatism around societal reproduction and longevity: something that Adam Smith’s theory of moral sentiments saw as a promise of capitalism, and Whig historians as the ‘preserving’, continuity-oriented aspect of the English revolution. In this, widely shared occidentalist trope, the inhabitants of the modern ‘West’ are dedicated towards maintaining its structural assets, in strong national solidarity that orchestrates their individual interests into durable, ordered, and sustained collective growth.

“Here, nobody cares for the state, and for something to last”, I was told by Vasilije. A carpenter in his early sixties who was laid of from Zastava Cars Institute, Vasilije was in the middle of a conversation about the machines and materials he claimed he remembered being siphoned and sold away from the old factory, prior to FIAT’s arrival. “Everybody thinks about their own pockets. Like, in which country you have the Constitution being changed every now and then? In Germany, they say that even if one last German remains, the Constitution would remain intact; here they change it all the time… But never mind us, who ruined it all. Tomorrow, our children will see our example and ruin it all again”. Representing West European nations as organised into common and durable frameworks – the English and their supposedly transgenerational inheritance of wealth, the Japanese and their supposedly modest economic behaviour – these narratives portray capitalist development as a superior moral project and social integration. In turn, they scorn the local sociality as plagued by unchecked individualism and scheme-making, a sorry trait of “Turkish slaves that will always behave like slaves” and thus have no concept of communal cause. Thus, when speaking about the state of local companies, Vasilije and many others whom I met often exhibited what I call a Stranger Master: a call for a foreign Other who would buy an enterprise and manage it responsibly - in order to save ‘us’ from mishandling it ‘ourselves’.

How to understand this moralisation of capitalism, and grassroots calls for a foreign proprietor as nationally beneficial in a European semi-periphery? Although they are articulated within a landscape of transnational dependency, and expressed in a self-orientalising language, this alone does not explain their strength. As Sahlins put it for the appeal of development among the indigenous people in Melanesia, the crucial question “is not simply what forces them to be like us, but why they should want to”.[iv] For Sahlins, the answer lies in what he terms ‘humiliation stage’ in cultural change – a point in which an actor starts to see his old way of life as flawed, and starts to actively debase it and seek change. Moralisation of societal reforms, in other words, represents not simply a false ideology that masks imperial domination, nor a one-way cultural transfer. Rather, it is an agentive reply to transnational processes, in quite local, regional and national value orders and dramas of ‘globalisation’.

In this sense, I suggest, we can understand yearnings for a ‘strong’ state, for so called ‘proper’ capitalism, and for foreign proprietors as a specific hybrid ethical form. Allowing new market institutions to settle in, such yearnings shapes them in continuity with preceding cultural materials - of agricultural economy, self-management and ‘unproductive’ post-Yugoslav employment – while assuring further reign of state-led market liberalisation. Feeling shame for the alleged lack of work-ethic among Serbs, people symbolically appropriate the capital investor into a role of a strict, yet necessary leader who is more successful in mastering economic longevity: in local terms, more of a domaćin (folk notion of household pater familias) than us. Echoing problems with ambiguous ‘social’ property in self-managed socialism, foreign proprietor thus becomes the one who saves ‘ours’ property by finally becoming the definite private owner of such property. And as for precarious work arrangements, they become active and materially necessary sacrificial acts of building a more lasting Serbian polity, and a stronger state.

In sum, the public humiliation over the ‘work ethic’ in Serbia revalues labour as an act of both personal and national redemption, and foreign privatisations as sites of state-making endeavour. Or as another Kragujevac inhabitant told me, referring to the beginning of the war in the 1990s: “now, we should gather as Serbs, to become workers again”. This brings to mind the billboards FIAT used to launch its new model in Kragujevac, that showed workers lined into a contour of a car. In addition to “Proudly made in Serbia”, the posters read “We are what we create”. Most of the local critiques of FIAT did not question the validity of this civilising mission attributed to it, but rather assessed FIAT on the grounds whether it is able to actually conduct it, and to instil ‘order’ and work ethos properly. Favourable critiques stated that the ‘Italians’ brought a neat technological process and strict work discipline; negative scorned them for being too much disordered (‘even Zastava had a better system’) and too much like the local people (‘Italians are even bigger conmen than we are’). In concrete reality of privatisations, therefore, the utopia of proper capitalism functions between a promise and disappointment. Stranger Master is always coming, yet is every time deferred. This creates means for dissent of concrete privatisations (as the actual proprietors disappoint), yet never really questions the hegemony of the market (as ‘proper’ capitalism is seen as not there yet). In this space between hope and regret, we find the complex role of morality in both legitimising and resisting transnational capitalism in European semi-peripheries today.

[iii] For a critique of this simplifying view, see Goran Musić, forthcoming. ‘They came as workers and left as Serbs’: the role of Rakovica’s blue-collar workers in Serbian social mobilizations of the late 1980s. In Archer, R., I. Duda and P. Stubbs (eds.), Social Inequalities and Discontent in Yugoslav Socialism. Ashgate.

[iv] Sahlins, M. 2005 (1992). 'The economics of the develop-man in the Pacific', in J. Robbins and H. Wardlow (eds.), The making of global and local modernities in Melanesia: humiliation, transformation and the nature of cultural change, 23-42. Aldershot: Ashgate.