A Taste of Hungary in Wimbledon 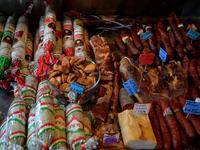 The smell of paprika wafted across the room to my nose as soon as I stepped through the doorway.

I had only been in the shop for a matter of seconds and I could tell I would be seeing the Hungarian Deli in Wimbledon quite regularly!

I called out to the shop assistant, who in turn greeted me in Hungarian.

The next half an hour proved to be a wonderful mix of poor Hungarian and strained English conversations about food, about language, about Hungary and New Zealand, and about all manner of unrelated but equally interesting things. 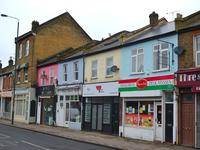 Kati, the shopkeeper, told me about her hometown, Debrecen, and asked why somebody from New Zealand would want to learn Hungarian.

Never properly prepared to respond to this common question, I muttered something about simply being a fan of both the country and the language.

The truth is, the real answer to such a query is incredibly complex and multi-faceted.

Why do I want to speak Hungarian?

Well, because I want to spend time in Hungary and Transylvania.

Because I don’t speak any foreign language fluently yet, and I felt that Hungarian was as good a place as any to begin.

Because I’ve always liked to do things a little differently, and learning Hungarian seemed like a more exciting journey to embark on than other languages favoured by native English speakers.

Because it has a reputation as a difficult language, and sometime in the future it might be nice to say that I can communicate in it.

Because I want to be able to utilise it in a foreign affairs career.

Most of all, however, I want to speak Hungarian so that I can speak to Hungarians. I want to spend time in Hungary and to experience the Hungarian way of life.

At SSEES, bit by bit, I am stepping closer to a knowledge of Hungarian where this understanding will be possible. 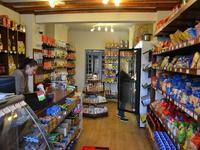 Meeting Kati, the friendly Hungarian Deli assistant in Wimbledon, was such an uplifting experience. For this first time since moving to London, I had a real and spontaneous conversation in Hungarian. It was halting, it was random; we talked about a frozen packet of non-circular szilvásgombóc (sweet and savoury doublings filled with plums) and exchanged vocabulary. “Téglalap”, said she. “Rectangle”, said I. I pointed to a picture of two rabbits hanging on the wall and asked “hogy hívják ezt?” – “what are they called?”. 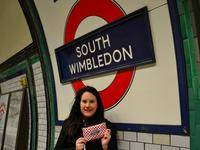 And so it was that I came away from the Hungarian Deli in Wimbledon with several new words of vocabulary, as well as some szalámi, a packet of meggy leves (sour cherry soup), some Túró Rudi (cottage cheese coated in chocolate), and – most wonderfully – a new friend. Kai and I plan to meet for coffee and a chat about the joys of Hungary (and rabbits -“nyulak”) very soon.

Find out more about the Hungarian Deli on their website

Text and photos by Rebecca McKeown, MA student of Hungarian, 2014-15.

Areas in North-West and North East London have been home to clusters of Polish and Romanian residents, with new shops catering specifically to their communities and introducing products made in their native countries. The same connection between residency and commercial activity applies to Hungarian communities. 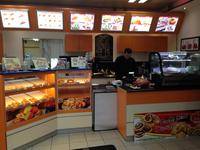 There are a few Hungarian bakeries in London to choose from, such as Louis Patisserie in

Hampstead, which is run by a multi-European staff and takes its inspiration from Austro-Hungarian cakes and pastries. The Fornetti patisserie in Willesden Green, however, is closer to a community meeting point. It forms part of a chain that originated in Kecskemét, Hungary, and has shops all over Hungary and the neighbouring countries. The staff is Hungarian and it serves the same types of pastries that can be found in Hungary.

Using the patisserie as a starting point, other community points, voluntary or involuntary, reveal themselves.

Everyday Hungarian in the Global City

I know that letter combination and am confident enough in my assessment to ask:

“Are you from Hungary?”

She is, and yet again my limited but ever-expanding knowledge of Hungarian brings about another fun conversation on an otherwise uneventful day.

London really is a global city, and you don’t need to visit specifically Hungarian, Romanian, or Czech sites to have interactions with interesting and interested people from those countries and others in the region.

If you are hoping to chat with a friendly person from Hungary, all you need to do is look around – there’s sure to be one somewhere nearby! And if they prove to be elusive, try the Costa coffee shop in the basement of the Gower Street Waterstones – four out of the six staff there are Hungarian, and one is even from Transylvania!