Colourstrings is an approach to music pedagogy which was the first to offer music education from a very young age in the UK and is the only approach that can be used all the way up to conservatoire level.

Based on the Hungarian composer’s, Zoltán Kodály’s philosophy in music education, which places the child and singing in focus, the Colourstrings method was initiated by the Hungarian brothers Géza and Csaba Szilvay in the 1970s in Finland, where it became part of the mainstream curriculum.

Listen to Katarina and Klara Čalić, young sisters trained with the Colourstrings method in London, as they sing in unison Susie the Snail and a Hungarian folk song welcoming the spring.

Undoubtedly, the most remarkable musician of Hungarian Jewish origin who left his mark on London’s music scene is conductor George Solti. During his time as musical director at the Covent Garden Opera Company in the 1960s, the establishment acquired the title Royal Opera House. Solti made his first recordings in 1947 as a pianist, and over the half a century that followed he won more Grammy awards than any other recording artist. His legacy was commemorated by an exhibition at the ROH in 2012.

Before fleeing his native Hungary because of the Jewish Laws of 1938, Solti György studied under Béla Bartók, among others, at the Budapest Academy of Music.

The composer Béla Bartók, in turn, is one of the few Hungarians to be commemorated by a blue plaque, as well as a statue, in London. Bartók, the who is also regarded as one of the founders of ethnomusicology, first came to London in 1922. Later he often stayed in South Kensington with friends when performing at the Proms or at the Royal Albert Hall. It is on the trafic island near the underground station that his statue stands today. 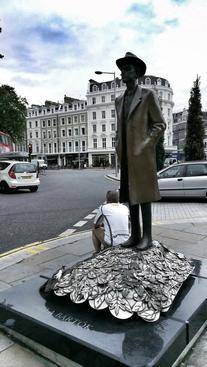 Bartók’s first major orchestral work in 1903 was Kossuth, a symphonic poem which hunoured Lajos Kossuth, the figurehead of the Hungarian Revolution of 1848, who, less than a century before the composer, also stayed in West London as the central figure of the post-1848-49 émigré circle from Hungary.

Bartók started collecting and analytically studying folk music with his colleague and lifelong friend, Zoltán Kodály whose inspiration to music education can still be felt today in London. One of their innovations in composing was that they started incorporating elements of folk music into modernist compositions.