The official website describes DAU by Russian director Ilya Khrzhanovsky as ‘the first cinematic project about isolation, filmed in isolation, for people in isolation’. The notion of isolation thus emerges as an important aspect of DAU production and reception alike. In 2009, an ensemble of pseudo-Stalinist architecture – the so-called ‘Institute – was built in Kharkiv, Ukraine, specifically for DAU. Khrzhanovsky had no script, no rehearsals and no reshoots. Instead, he came with an original cinematic formula: immerse hundreds of volunteers in a thoroughly (re)created universe of Soviet totalitarianism and let the genius loci – the spirit of the place – direct the movie.

The Institute operated as a genuine heterotopia, In the Foucauldian sense of term: an isolated site where the line between fiction and reality, between the past and the present, became indistinguishable. Using the six principles of heterotopology formulated by the French philosopher, the present paper devises an original model of ‘heterotopic cinema’ to demonstrate how heterotopias generate spatially and temporally multi-layered conditions of both film production and reception. This model is then used to discuss Khrzhanovsky’s attempt to create heterotopias in London, Berlin and Paris as a part of a global release of his project.

Finally, the paper examines the implications of the pandemic and the condition of confinement for the release of DAU online. It argues that the pandemic has transformed domestic space into a heterotopia of reception, thus providing the spectator with instrumental mediation necessary for DAU to reach its full potential.

After the presentation by Alexandre Zaezjev, Mark Lipovetsky will offer his response to the ideas and arguments expressed in the paper and to the DAU project as a whole. Professor Lipovetsky’s contribution will be followed by questions from and discussion with the audience.

Registration is free but essential via Zoom.

is a PhD Candidate at the University of Geneva, Switzerland. 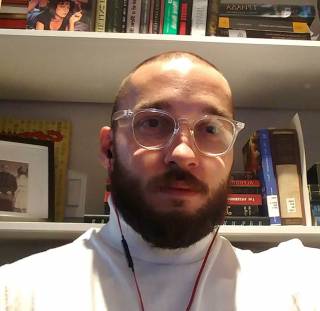 His doctoral thesis focuses on the role of social media in the development of participatory creative practices. His research focuses primarily on Russia and the post-Soviet region. Alexandre has given talks on DAU at several conferences, presenting his work both in Europe and in North America. His most recent article, From Dusk till “DAU”: the Rise of Heterotopic Cinema in the Times of Pandemic, was published in Baltic Screen Media Review, 8, 2020. Combining academic research with creative practice, Alexandre is also an independent multimedia artist.

is Professor at the Department of Slavic Languages, Columbia University (New York, USA). He is the author of ten books and editor/co-editor of twenty volumes on C20th-C21st Russian literature and culture. He is mostly known for his works on Russian postmodernism, New Russian drama, the trickster in Soviet culture, and Dmitry Prigov. Lipovetsky is also one four co-authors of the Oxford History of Russian Literature (2018). Winner of AATSEEL award for the outstanding contribution to scholarship (2014) and Andrei Bely Prize for his input to Russian literature (2019).