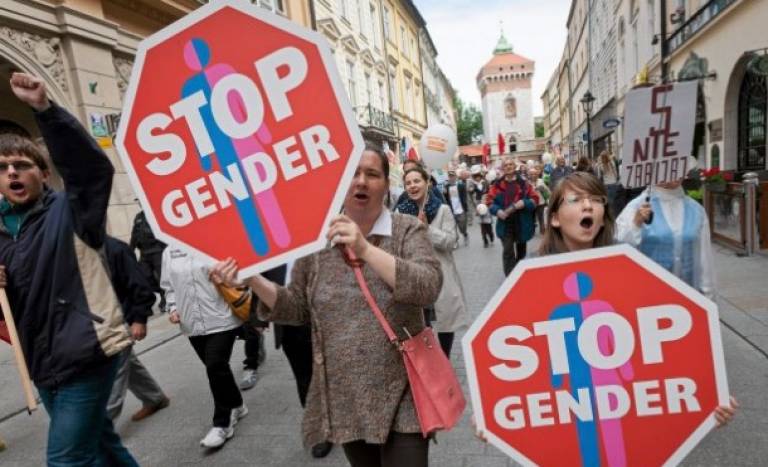 Numerous countries in Western and Eastern Europe, in Latin America and in some other parts of the world have recently been faced with a fierce opposition to what used to look like a steady progress in ensuring sexual rights and gender equality. Mass protests against marriage equality, reproductive rights, gender mainstreaming and sexual education have centralized around the so called “gender theory” or “gender ideology”. It is explained that the very notion of “gender” is in fact a hidden plan of “radical” feminists and LGBT activists, a new type of Marxism, aiming at nothing less than a cultural revolution: a post-binary gender world, where there is no place for “natural families”, masculinity, femininity etc. “Gender theory” has become an empty signifier, an all-inclusive mobilizing tool, used by various (religious) groups, political parties and even state establishments to prevent equality policies from being adopted and implemented.

The lecture will map out and explore the emergence, the content and the effects of the “gender ideology” (or “gender theory”) discourse. It will examine how an academic concept of gender became a mobilizing tool for neo-conservative social movements and massive street demonstrations and how the concept of human rights, which has been used until recently by the proponents of gender and LGBT equality, is now being (ab)used by neo-conservative actors.

This event is hosted by UCL SSEES and made possible by the generous support of the University of Ljubljana and the Slovene Embassy. Slovene wine will be served, courtesy of the Embassy of Slovenia in London.

Professor of sociology at University of Ljubljana

Roman Kuhar is a professor of sociology at the Department of Sociology, Faculty of Arts, University of Ljubljana, and teaches courses on gender, sexuality, popular culture and everyday life. Currently he is the dean of the Faculty of Arts and the head of the research programme The Problems of Autonomy and Identity in the Times of Globalization.

His work has been published in numerous academic journals, including Critical Social Policy, Journal of Homosexuality and Women’s studies international forum. He is the author of several books, among others Media Construction of Homosexuality, co-author (with A. Švab) of The Unbearable Comfort of Privacy and co-editor (with J. Takács) of Beyond the Pink Curtain: Everyday life of LGBT people in Eastern Europe and (with D. Paternotte) of Anti-gender Campaigns in Europe: mobilizing against equality.