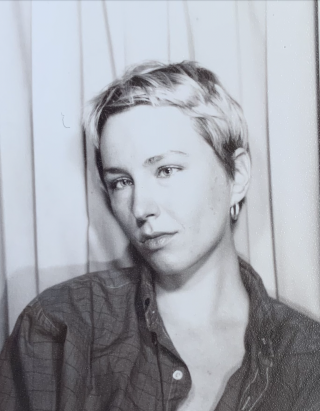 Working title of thesis: Self-organisation in the Arts and Culture in Ukraine since 2014

Research: My research focuses on the Ukrainian art and cultural scene (that is defined by sporadic, individual projects which are mostly unsystematic and non-institutionalised). Such self-organised art initiatives, however, invent unconventional survival mechanisms and innovative artistic languages regardless of the insufficient infrastructure, dramatically changing socioeconomic circumstances, and the ongoing colonial war waged by the Russian Federation.

A central task of my PhD research project is to identify the aesthetic, political, and ideological agenda of the Ukrainian self-organised art and cultural initiatives and examine how and to what extent they contribute and challenge dominant narratives around cultural identity, political culture, and institutionalization. What are key values and operational strategies of the self-organised cultural initiatives whose institutionalization was stimulated by the political events in Ukraine in 2014 and 2022? How does cultural self-organisation contribute to the resistance to Russian cultural dominance? What institutional relationships emerge from war, and how this effects the global discourse of decoloniality?

Research-related activity: As a Ukrainian cultural producer I am engaged in a number of initiatives focusing on decolonization of the East European area studies; the reconstruction of Ukraine; and (self)-archiving in the time of war. I am a co-organiser of the following selective initiatives: reimagined Perverting the Power Vertical: Politics and Aesthetics in the Global East seminar series that since October 2022 operate under the Ocuppy PPV: Politics & Aesthetics in the Global East name and provide programming focusing on art, resistance, and antiauthoritarianism; A digital archive of memories of people directly affected by the Russian war against Ukraine; “The Reconstruction of Ukraine: Ruination / Representation / Solidarity” symposium, and Oberih publication project.

Research Centre Affiliation: FRINGE: UCL’s Centre for the Study of Social and Cultural Complexity  Perverting the Power Vertical: Politics and Aesthetics in the Global East