“an experiment … a means of bombarding students with the art of film”.

In 1960 the Slade became home to Britain’s first university film department, a unique centre of research, filmmaking and extraordinary screenings. Our aim is to archive and locate the moment of film’s recognition as an art-form within British cultural and intellectual history, producing a comprehensive survey of the department from its origins in the 1950s, when UCL’s interest in film was unorthodox, until its remodelling in the 1980s. We research the Slade’s pioneering role in promoting film as an art medium in British art schools and the pedagogical and interdisciplinary innovations that emerged from it. 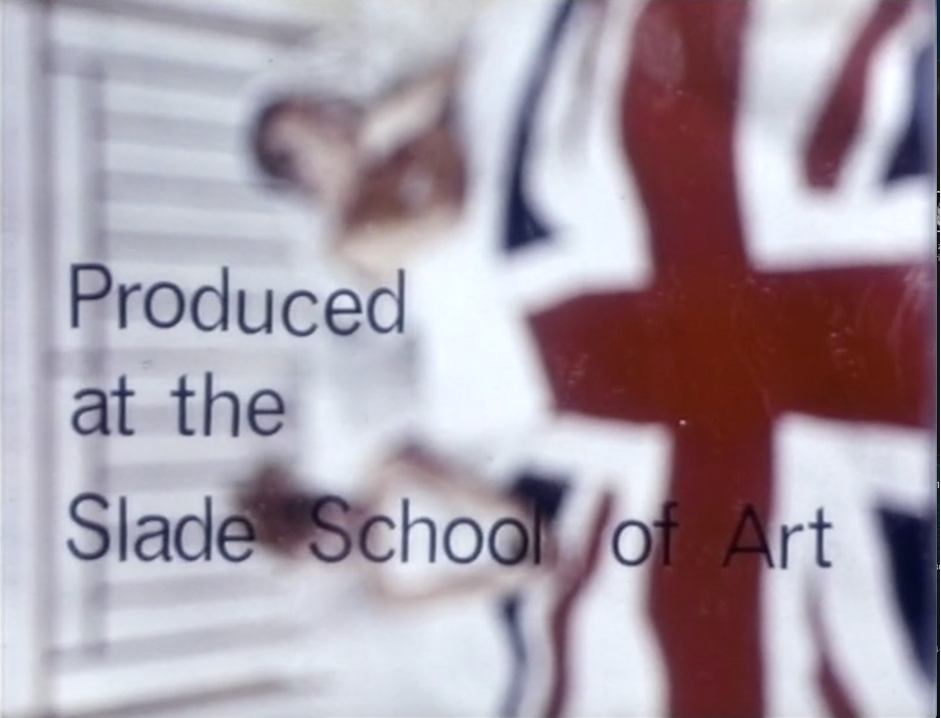 Still from Parallels (1964) by Peter Whitehead

Brighid Lowe: We first started working together in 2011. I teach at the Slade and knew nothing about the story of the Slade Film Department – except that it had been the first of its kind in any British university. After seeing Marco Bellocchio’s extraordinary Fists in the Pocket (1965) I was very excited to read that he had written the screenplay as a Slade student. But frustratingly no one could tell me anything more, until I saw a blogpost that Henry had written about the Slade film department for the Guardian.

I got in touch with Henry and from talking to him I learnt that the department’s lecturer Thorold Dickinson, director of Gaslight (1940), had taken his students through films on an editing machine. This pedagogical mixture of theory and practice resonated with me, and seemed hugely advanced for the time.

I began the (ongoing) process of learning about the students who were impacted by the Slade Film department and its film screenings. Here are a few: Peter Whitehead, chronicler of the counter-culture, Pamela Zoline, author of the feminist sci-fi classic ‘The Heat Death of the Universe’, Vivan Sundaram, a contemporary multimedia artist based in India, and Lutz Becker,  whose pioneering abstract filmless films made with television technology were exhibited in the famous 1968 exhibition Cybernetic Serendipity.

Then my friend the filmmaker Gilly Booth said I should look into Lorenza Mazzetti, the director of Together (1956), and that she had studied at the Slade.

Henry K. Miller: In the mid-2000s I wrote two parts of a projected four-part history of the Slade Film Department for Gareth Evans’s Vertigo magazine. In the course of writing it I discovered the catalytic role of Lorenza Mazzetti in the department’s coming-into-being. One of the films she made at the Slade in the early 1950s, K, based on Kafka, survives, but I also discovered there was a second one, of which nothing had been heard since.

By the end of the second part of my story, I had got only as far as 1960, the year the department was founded. After visiting the archive at UCL I knew that the story was too big and too interesting to continue, and I had a PhD to write. It remains a two-parter: From First Principles: A Prehistory of the Slade Film Department and The Slade School and Cinema: Part Two.

But I wrote bits and bobs over the years (e.g. Peter Whitehead: the Slade Years), and in January 2011 Catherine Shoard let me write a Guardian blogpost to commemorate the fiftieth anniversary of Thorold Dickinson’s first Slade lecture, which is where we came in.

BL: Margot Bannerman, a Slade alumna and lecturer at Central Saint Martins, bumped into Susan Collins, the Slade Director, and told her of her desire to bring Lorenza Mazzetti back to the Slade. Susan knew I was interested in the Slade and film, so she put us in touch. Together we brought Lorenza Mazzetti to London in 2013, to show her films and to interview her on stage, at the Birkbeck Cinema. Margot had first encountered Lorenza in the Italian countryside, when she met an elderly lady hunting for her friend’s tortoise. In the course of this, they discovered that they both had been students at the Slade and so became friends. It was an archetypal Lorenza story and she was to share many more stories with us in London. A vigorous 83, Lorenza must have been writing or just finished her memoir of the 1950s, later published in English by Zidane Press as London Diaries, and it was all fresh in her mind. Sadly, Denis Forman, who had been the director of the BFI in the early ’50s, and who she called one of her ‘angels’, died mere days before Lorenza’s arrival. We showed Together, of course, but also K, which had only recently become available, and it was a revelation to all of us. This was no mere student film.

HKM: My initial interest in the Slade Film Department came out of my work on the film critic Raymond Durgnat, who was one of the first two film students to join. The book that eventually came out of this in 2014, The Essential Raymond Durgnat, which I edited, drew on the Slade’s archives – including his application form, an extraordinary document where he claims that his ‘most cherished possession is a letter from Jean Renoir saying that a long exegesis I sent him of “French Can-Can” was accurate enough for him never to look at again in case it made him self-conscious’.

At about this time the Paul Mellon Centre kindly awarded me a grant to return to the archive and research a particular area of the Slade’s activities – its engagement with history, including the work of Lisa Pontecorvo, a pioneering historian of newsreels and film propaganda, who was the animating spirit behind two important conferences at UCL on film and the study of history. At one of these Thorold Dickinson had restaged a film event he had first mounted at the storied Film Society in 1937, ‘Record of War’.

BL: Thorold Dickinson had taken an Italian propaganda film about the Italian invasion of Abyssinia and intercut it with material from a Russian film shot on the ground, showing the gas attacks that the Italian film left out. It caused a diplomatic incident. When we decided to reconstruct it at Birkbeck Institute for the Moving Image, in June 2017, I don’t think we anticipated what incredible demands it would place on the projectionists – projectionists plural, Kelly Warman and Sebastian Buerkner, who I think compared their feats with competing in the Olympics (Records of War: Film History and the Art School). It was by no means as simple as cutting from one projector to another. We had two brilliant speakers on stage afterwards, Neelam Srivastava, and Lutz Becker, formerly one of Dickinson’s students – who had been at the 1969 reconstruction as well. It was an extraordinary afternoon.

HKM: We work closely with Liz Bruchet, who until recently was the part time Slade archivist, and we had told her that there was one document above all others that we were looking for among the department’s largely uncatalogued papers. We knew that Marco Bellocchio, in addition to writing his first feature while in London, had also written a thesis on Bresson and Antonioni, but we hadn’t seen it and nor had anyone else. But one day in late 2017 Liz dug it up ­– just in time, as it happened, for Bellocchio’s retrospective at the BFI the next year. I went to Rome to interview him about his time in London for Sight and Sound magazine, and told him about the thesis – which he hadn’t seen since he wrote it. We gave him a copy when he came over for the retrospective and had tea at the Slade – which he hadn’t visited in more than fifty years.

BL: It was wonderful talking to Lorenza when she visited, but we wanted to capture her on film – and for her to go into as much detail as she could bear about her time at the Slade. Though she had written about her experience in London Diaries, for which I wrote the foreword, there was still more to discover (London Review of Books: Perfection is not an aim
Isabel Stevens meets Lorenza Mazzetti).

HKM: Lorenza’s London Diaries mention only one Kafka film, but we knew there was another one out there somewhere, and we had to ask her about it. To our immense pleasure, she remembered it in detail. Though she didn’t know where it had ended up ­– I don’t think anyone had seen it since the 1950s, Lorenza included – she left us with an important clue. 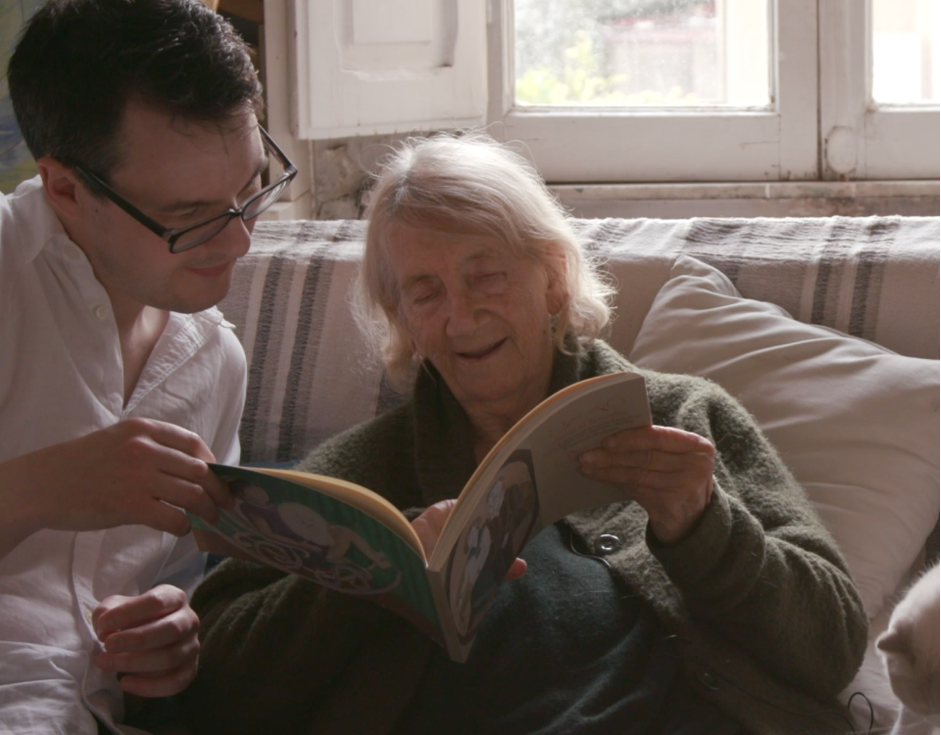 BL: With the support of Professor Stella Bruzzi’s Dean’s Fund, we spent four days with Lorenza in April 2018, in and on the roof of her apartment in the middle of Rome. Gilly Booth recorded her – and filmed her – beautifully, while Henry came primed with detailed research and questions. Lorenza was frailer than she had been in 2013, more or less confined to her home, though we took her to a cinema in the Campo de’ Fiore one afternoon. Lorenza and her twin sister Paola, who we also interviewed, kept something like open house, and it was unlike any other interview I can imagine. We showed a brief clip from it at Focal Point gallery in Southend a few months later, when we introduced a screening of Together.

Together with Professor Bob Lumley and Dr Cristina Massaccesi of UCL’s Italian Studies department, I nominated Lorenza for an Honorary Fellowship. In September 2018, due to Lorenza’s failing health, the Provost and a group from UCL, travelled to Rome to bestow the award at a ceremony at the British School. Lorenza was absolutely thrilled.

HKM: Archives are great, but interviews give you something else. I caught the bug from our interview with Lorenza, and since then we’ve also spoken to James Scott, Lutz Becker, Stacy Waddy, Deanna Wisbey, Paul Huson and Astrid Wilson. Covid-19 has set us back a bit, obviously doing interviews-wise, but also for visiting the archives-wise. My last time in London before the first lockdown was spent with the former archivist of UCL Film Society, Robert Coren, going through the perilously piled-up boxes of FilmSoc material in search of material that might tell us more about Lorenza’s cameraman, Ahmed al-Hadary. We didn’t find it, but the search never ends…

BL: Through a misspelling of Lorenza’s surname in the archive catalogue of an American university library, we almost never found the second Kafka film, The Country Doctor. But eventually we did, and we were able to show it to Lorenza before her death, though sadly not in person. So far Covid has prevented us from showing it in public. With Ginte Regina (who filmed our interviews with James Scott and Lutz Becker) editing alongside me, I decided I had to use the footage we shot with Lorenza, and try to make a film out of it. Its working title is Together with Lorenza Mazzetti.

Then in 2019, a surprise email arrived from the novelist Ali Smith, who had become bewitched by Lorenza after reading London Diaries. Henry and I were delighted to visit her in a pre-Covid Cambridge and share the in-progress Lorenza film with her. Very sadly Lorenza Mazzetti died on 4 January 2020 (Sight and Sound obituary Lorenza Mazzetti). It was fitting that within the dispiriting pandemic days of 2020, Ali Smith’s latest novel Summer was published, featuring Lorenza Mazzetti within it.