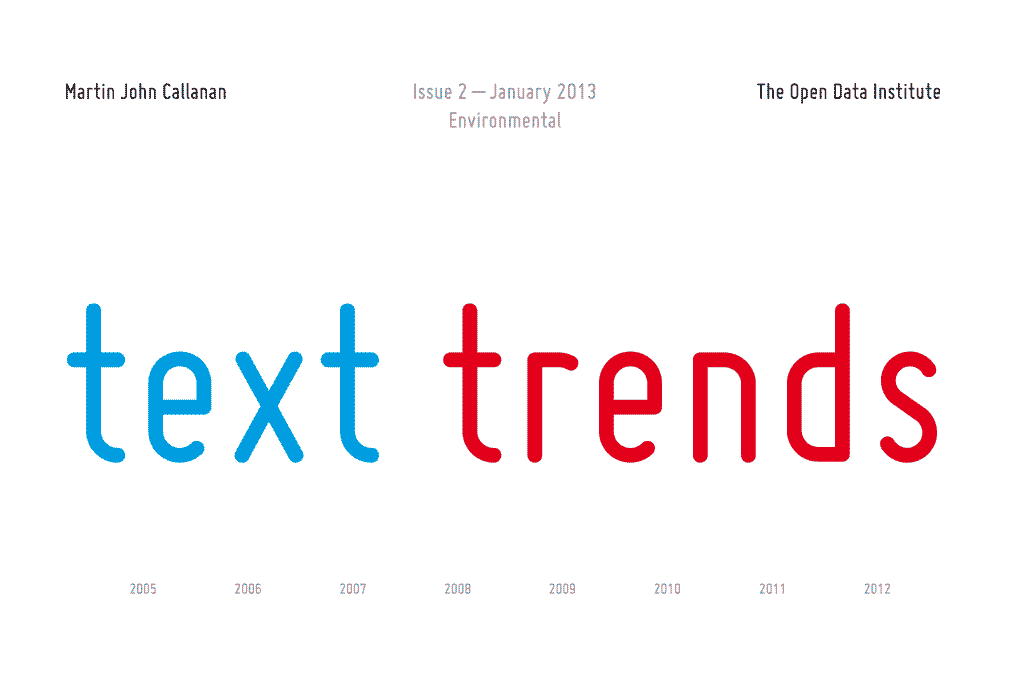 The second issue of Callanan’s Text Trends newspaper, looking at environmental data, will be available in limited numbers from 14 January 2013 at The Open Data Institute.

Over the past twenty years, global climate change has emerged as the overarching narrative of our age, uniting a series of ongoing concerns about human relations with nature, the responsibilities of first world nations to those of the developing world, and the obligations of present to future generations. But if the climate change story entered the public realm as a data-driven scientific concept, it was quickly transformed into something that the ecologist William Cronon has called a ‘secular prophecy’, a grand narrative freighted with powerful, even transcendent languages and values. And though climate science can sometimes adopt the rhetoric of extreme quantification, it also — as has been seen throughout this book — relies on the qualitative values of words, images and metaphors. This can even happen simultaneously: during the discussions that led up to the IPCC’s Third Assessment Report of 2001, for example, a room full of scientists discussed for an entire week whether or not to include the three-word phrase ‘discernable human influence.’ Only three words, perhaps, but three extremely potent words (both qualitatively and quantitavely speaking), that between them tell a vast and potentially world-altering story.

Martin John Callanan’s ongoing Text Tends series offers a deadpan encounter with exactly this kind of quantification of language. Using Google data the series explores the vast mine of information that is generated by the search engine’s users, each animation taking the content generated by search queries and reducing the process to its essential elements: search terms vs. frequency of search over time, presented in the form of a line graph.

In the online manifestation of the Text Trends animations the viewer watches as the animations plot the ebb and flow of a series of paired search terms keyed into Google over the last ten years by Internet users around the world. In the case of the environment sequence featured here, pairs of words such as: ‘nature’ — ‘population’; ‘climate’ — ‘risk’; ‘consensus’ — ‘uncertainty’; ‘Keeling curve’ — ‘hockey stick’, spool out matter-of-factly, like a live market index, allowing the implied narrative content of these word comparisons (along with their accumulated cultural and emotional baggage) to play themselves out before us. In contrast to the hyperinteractivity of emerging news aggregators and information readers, Text Trends explores our perceptions of words presented as connotation-rich fragments of continually updated time-sensitive data.

As an investigation into both the generation and representation of data, Text Trends offers a visual critique of the spectacularization of information, a cultural tic that continues to generate the endless roll of statistically compromised wallpaper that surrounds so much public science debate, and which our book — Data Soliloquies — has in large part been about.

Though Text Trends, Martin John Callanan deals with the spectacularization of information. Using Google data he explores the vast search data of its users. An animation takes the content generated by search queries and reduces this process to its essential elements: search terms vs. frequency searched for over time, presented in the form of a line graph, 16 of which are reproduced in this book.