Our Management Team is made up of members from our university partners, and our Steering Committee consists of key external partners and is chaired by Barney Sloane from Historic England.

Professor May Cassar is the Director of the UCL Institute for Sustainable Heritage.  May is also a member of the Department for Culture, Media and Sport’s Science Advisory Council. May currently directs the EPSRC Centre for Doctoral Training in Science and Engineering in Arts, Heritage and Archaeology, a multi-million pound UK Government investment to educate to doctoral level the next generation of heritage scientists. As the Director of the Arts and Humanities Research Council/Engineering and Physical Sciences Research Council’s Science and Heritage Programme (2007-2014) and as Special Adviser to the House of Lords Science and Technology Committee Inquiry on Science and Heritage (2005-2006), May has led the resurgence of heritage science research activity in the UK over the last decade for which she has been recognised by the Royal Warrant Holders’ Association with the award of the Plowden Gold Medal in 2012. 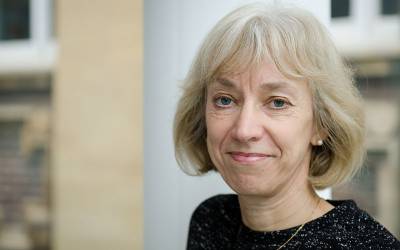 Heather Viles is a geographer with major interests in geomorphology and heritage science. Much of her research focuses on the application of science to heritage conservation. She is currently Professor of Biogeomorphology and Heritage Conservation at the School of Geography and the Environment, University of Oxford. Her research is highly interdisciplinary and involves studies at the interface of geomorphology with ecology, engineering geology, environmental chemistry and materials conservation. 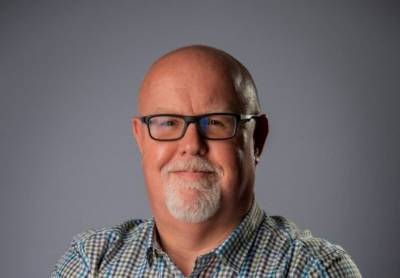 Roger Evans is a Reader in Computer Science in the School of Computing, Engineering and Mathematics, University of Brighton, UK. His research explores applications of computer technology particularly to problems which involve the use of natural (human) languages and with a specific focus on lexicalist approaches. Recent projects have focused on text mining and semantic metadata in Digital Humanities and Cultural Informatics, funded by the AHRC, the Digging into Data challenge and the European Commission. Roger studied Mathematics at Warwick and Cambridge before obtaining a DPhil in Cognitive Studies (Computational Linguistics) at Sussex in 1987. He was Deputy Head of the Information Technology Research Institute at Brighton, is a former SERC Advanced Fellow and a current member of the EPSRC College. 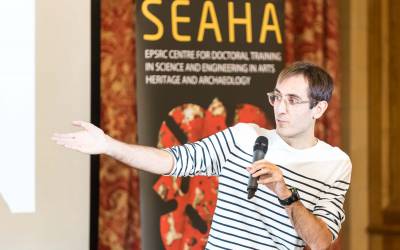 Josep Grau-Bové is a heritage scientist specialised in computational methods for preventive conservation. He directs the MSc in Data Science for Cultural Heritage and before that he directed the MRes SEAHA. He is passionate about public engagement, traveling around the country in the Mobile Heritage Lab and finding ways to involve citizens in research.

Profiles of Other Members

Eileen Cox is Head of Postgraduate Studies at the Natural History Museum, with prime responsibility for organising, co-ordinating and delivering the training and support of PhD students co-supervised by NHM staff. She also sits on the management boards of other doctoral training partnerships in which the museum is a hosting partner, facilitating research collaborations and contributing to their various activities. Originally studying botany at Bristol University, her own research focussed on diatoms (a group of microalgae), including aspects of their taxonomy, systematics, ecology and wall ontogeny, working in both the UK (Universities of Bristol, Oxford and Sheffield; NHM) and Germany (Biologische Anstalt Helgoland (Litoralstation) and Max-Planck-Institute for Limnology). Having published over 120 papers and previously edited the European Journal of Phycology, she is currently Editor in chief of Diatom Research.

Kate Frame works for Historic Royal Palaces as Head of Conservation and Collection Care, Collections Management planning, facilitating and developing the palaces’ programmes she established from 1999 that integrate conservation with revenue generation. Her current responsibilities include accountability for Heritage Science research at HRP, which focusses on conservation study of large-scale hanging historic textiles and is delivered by HRP’s scientists. Kate is leading a Technical Conservation Research Programme, 2016-2022, for the protection and conservation of the ceiling paintings of the Banqueting House, Whitehall Palace, by Sir Peter Paul Rubens. Prior Kate worked as first conservator for the Canadian City of Toronto’s heritage sites creating programmes to conserve that city’s museum and outdoor public art collections.

Senior Partner in and Director of Planning Together Associates, has worked as an independent consultant to Public and Voluntary Sector Organisations for the last 20 years. His primary focus has been helping chief executives, senior management teams and trustees  to plan for and handle organisational change.

He has worked extensively with Heritage organisations including, Historic Royal Palaces, Tate Modern, Unesco, Iccrom, Museum of Modern Art in New York, Norfolk museums Service, York Museums Trust, Londons Transport Museum Trust, MDA ( Now Collections Trust), The Sainsbury Centre for Visual Arts, the Fitzwilliam Museum and the Centre for Sustainable Heritage at UCL. He has a special interest in and experience of Leadership, Governance and Organisational development in ‘not for profit organisations’ . He is Chair of Trustees of Kidscape a national childrens charity in the UK, and advises several UN based international NGOs on Governance issues.

Andrew Herbert has been involved with computers since his schooldays. He gained a PhD at Cambridge where he continued as a lecturer before a career in industry culminated in becoming the Chairman of Microsoft Research EMEA.  Andrew “retired” in 2011 to devote more time to his interests in computer conservation and vintage aviation.  He is the project manager for the EDSAC Replica Project based at the National Museum of Computing at Bletchley Park engaged in a working reconstruction of the Cambridge EDSAC, the world’s first practical digital computer from 1949.
In the world of aviation he is managing a privately funded project to restore a wrecked 1940’s Supermarine Walrus seaplane to flying condition. He owns and maintains a 1953 de Havilland Chipmunk and belongs to a group owning two 1930’s de Havilland Tiger Moth biplanes.

As Managing Director of Qi3, Robin is a specialist in international technology marketing at the highest level, focusing on strategy, marketing, sales, and technology translation. His private clients range from large corporations such as Unilever, Lockheed Martin, Selex, and Elekta, through SMEs and Venture Capital Funds, to start-up companies. In the public sector, Robin has led major market evaluation and engagement projects for the European Space Agency, UK Space Agency, and the Technology Strategy Board. His academic clients include UK Research Councils, and a wide range of Universities. He is also an Advisory Board member of Algenuity Ltd.Robin has a long track record of success in finding and exploiting new markets, launching disruptive new products, rapidly growing market share, and increasing profitability through market driven change. In previous roles, Robin has extensive experience of marketing, sales and general management in a broad range of global corporations including Air Products, Raychem, Pall, Oxford Instruments, and Halma. In his spare time, Robin is a keen choral singer and Chairman of the Fairhaven Singers.

Pip has over twenty years of experience in the conservation of contemporary art beginning her career in Sculpture Conservation and going on to establish and lead Tate’s pioneering Time-based Media Conservation section from 1996 until 2010. In her current role Pip develops, leads and supports research related to the conservation and management of Tate’s collections. In championing the role of research practitioners as a central part of what it means for a contemporary art museum to be a research organisation, Pip is committed to interdisciplinary research that serves and responds to art of our time. Pip has secured awards for research from a range of funders including private foundations, the European Union framework programme and the UK’s Arts and Humanities Research Council. She received her doctorate from University College London, is an accredited member of the Institute for Conservation, a trustee of the UK’s National Heritage Science Forum, and is a member of the Steering Committee of the International Network for the Conservation of Contemporary Art (INCCA).

With a degree in archaeology and ancient history, he spent 13 years working with what is now Museum of London Archaeology, recording analysing and publishing the results of major rescue excavations in the capital. Between 1999 and 2003 he conducted an AHRC-funded research project on medieval death, before joining English Heritage – now Historic England. He is currently Vice President of the European Archaeological Council, and acts as the Chair of the SEAHA Steering Committee.

Ulrich Tiedau is a Senior Lecturer in the UCL Department of Dutch and SEAHA Tutor. He has worked on and across the boundaries of the humanities and technology for most of his professional life in areas like publishing, librarianship and academia. He is also an Associate Director of the UCL Centre for Digital Humanities and editor-in-chief of Dutch Crossing: Journal of Low Countries Studies which in December 2009 has been awarded an honourable mention in the Phoenix Prize for Significant Editorial Achievement by the Council of Editors of Learned Journals (CELJ).

Tim Weyrich is Professor of Visual Computing in the Virtual Environments and Computer Graphics group in the Department of Computer Science, University College London. Prior to coming to UCL, he was a Postdoctoral Teaching Fellow of Princeton University, working in the Princeton Computer Graphics Group, a post he took after having received his PhD from ETH Zurich, Switzerland, in 2006. Tim is currently Deputy Director of the UCL Centre for Digital Humanities, and member of the Steering Boards of the Eurographics Workshop on Graphics and Cultural Heritage, and of the UCL Centre for Digital Humanities, as well as member of the Executive Committee of Eurographics. He serves as Associate Editor for Elseview Computer & Graphics and is member of the Association for Historical and Fine Art Photography (AHFAP), special interest group Libraries & Archives Imaging, of EPSRC College, BCS, ACM SIGGRAPH, Eurographics and of Gesellschaft für Informatik. Tim’s research interests include content creation, appearance modelling and fabrication, point-based graphics, 3D reconstruction, cultural heritage analysis and digital humanities.