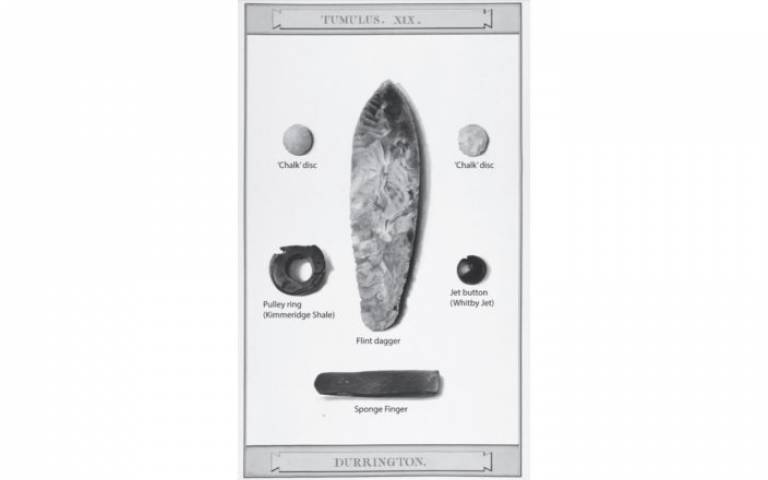 SEAHA student Richard Higham (UCL/University of Brighton) has recently published two papers on his research investigating variation in grave assemblages and the construction of social identity during the Beaker period (2450BC- 1650BC). Working alongside his supervisor Dr Chris Carey (University of Brighton), Richard analysed collections and archives of Beaker burials from Devizes museum, Keiller museum, Chichester museum and the Ashmolean museum, in order to identify variation in burial practice during the Beaker period.

The research is part of a wider analysis of variation into Beaker period funerary practices and began with reanalysing the grave goods from the Durrington Sarsen Burial (see image). The grave goods of this burial indicates a burial date of 2250-1950BC, a time when Beaker burials dominate the archaeological record. The location of this curious burial, which had been excavated in 1809, was lost to archaeology.   However, by investigating past maps and letters, the probable location of this burial was identified, just outside the bank of the Durrington walls henge. The absence of the Beaker pottery vessel is interpreted as significant, given that the burial is located within the Stonehenge monumental landscape, which contains numerous Beaker burials containing a range of prestige grave goods.

This research lead to a reconsideration of the archaeological narrative of the Beaker period, which has been dominated by the study of Beaker pottery and the ‘Beaker people’. Examples were found of Beaker period burials that excluded Beaker pottery from the grave assemblage. This reasearch considered what these burials represented in terms of social identity and whether they can be interpreted as Beaker burials or represent other identities co-existing alongside Beaker societies. The publication aims to highlight the variation within the burial practices of the Beaker period and promote discussion of multiple identities during this dynamic period of prehistory.

Header image: The original engraving of the finds from the Sarsen Burial published in Ancient Wiltshire (1812), drawn by Phillip Crocker, with annotation. These finds are now on display in Devizes Museum.

Richard Higham is a SEAHA student in his MRes year currently based at the Institute of Sustainable Heritage at the University College London and will go on to study his PhD at School of Environment and Technology at the University of Brighton. Supported by Historic England and Trent and Peak Archaeology, his present research is ‘Evaluating evaluation trenching in archaeological projects’.

Find out more about Richard's research