Targeted screening could prevent one in six prostate cancer deaths

Nearly one in six deaths from prostate cancer could be prevented if targeted screening was introduced for men at a higher genetic risk of the disease, according to a new UCL-led computer modelling study. 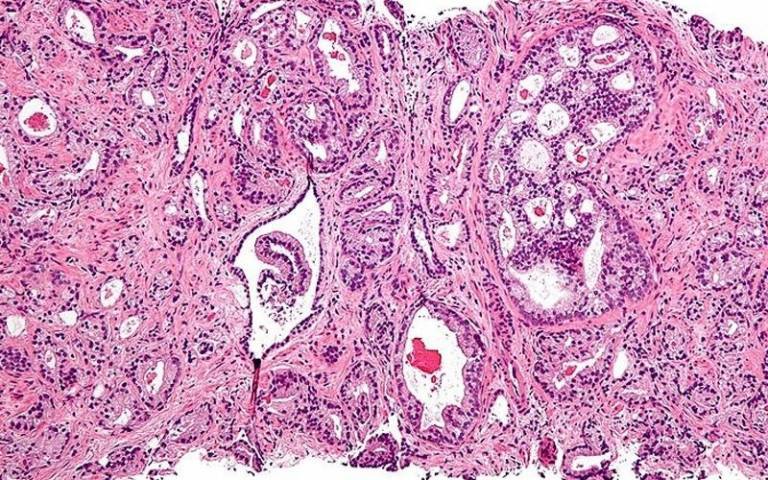 Prostate cancer is the most common form of cancer in men with around 130 new cases diagnosed in the UK every day and more than 10,000 men a year dying as a result of the disease. However, unlike breast and cervical cancer there is currently no national screening programme for this disease in the UK.

A blood test that detects raised levels of the prostate-specific antigen (PSA) can be used to screen for prostate cancer. However, this test is not a reliable indicator as it does not accurately distinguish between dangerous cancers from harmless ones - leading to both unnecessary operations and missed cancers that are harmful.

The study, published in PLOS Medicine, modelled the harms and benefits of introducing four-yearly PSA screening for all men aged 55 to 69 versus more targeted checks for those at higher risk of the disease.

The researchers concluded that the best approach would be to screen men at a slightly higher genetic risk – nearly half of men in that age group – as this would have the biggest health benefit, preventing deaths from prostate cancer while minimising unnecessary treatments for harmless tumours. This is because men with a higher genetic risk are more likely to benefit and less likely to be harmed by undertaking screening.

Professor Nora Pashayan (UCL Applied Health Research), senior author of the study, said: “Prostate cancer is a leading cause of death from cancer in men in the UK, but screening is not performed because the harm of overdiagnosis is thought to outweigh the benefits.

“Our study shows that targeted screening can reduce unnecessary diagnoses while helping to prevent people dying from the disease by enabling earlier detection.”

Researchers created a hypothetical cohort of 4.5 million men, representing the number of men aged 55 to 69 in England, and simulated the outcomes of introducing screening into this population. Outcomes including prostate cancer deaths averted, unnecessary diagnoses and screening costs were compared for no screening, universal age-based screening and more targeted screening using a range of thresholds of genetic risk.

The optimal scenario, the researchers concluded, would be to screen men with a 4-7% risk of getting prostate cancer over the next 10 years – that is, between roughly half and a quarter of all men aged 55 to 69.

Screening all men in that age group would result in the most deaths averted (20%) but, along with the extra cost, would also lead to a large number of unnecessary diagnoses, with nearly one in three cancers detected by screening being harmless.

Screening at a threshold of 4% would prevent 15% of deaths from prostate cancer –  nearly one in six deaths – while delivering the greatest gains in terms of quality adjusted life years, meaning more years of good health across the population. This would also reduce the number of unnecessary diagnoses of harmless cancers by about one third compared with screening all men aged 55 to 69.

Screening men with a 4-7% risk would also be much more cost effective than screening all men aged 55 to 69, saving between a fifth (for the 4% risk threshold) to nearly half of the cost (7% risk threshold), while maintaining the benefits of screening.

Under the scenarios simulated, men aged 55 to 69 would have four-yearly checks once they had reached the risk threshold. This would mean a widening proportion of men having checks the older they got, as older men are at greater risk of the disease.

Pioneering UCL-led research has already led to a change in the way prostate cancer is diagnosed. As of last December, MRI is now recommended as the first test for men suspected of having the cancer, after two clinical trials conducted with University College London Hospitals (UCLH) trust found MRI scans could markedly and safely reduce the numbers of men needing an invasive biopsy.

Professor Mark Emberton (UCL Medical Sciences) said: “I feel we now have the tools that help us identify men with clinically important disease – applying these tools to the right patient has to be the future. That is why this work is so important in helping us know who and when to screen.”

Researchers said targeted screening based on genetic risk would require an evolution of screening services. They noted that inviting people for screening at different ages may affect screening delivery and that the broader impact of screening using genetic risk required further research.