You might expect to find LEGO scattered all over a child’s bedroom floor but UCL researchers have successfully used it to create a low-cost, automated method for fluorescence microscopy. 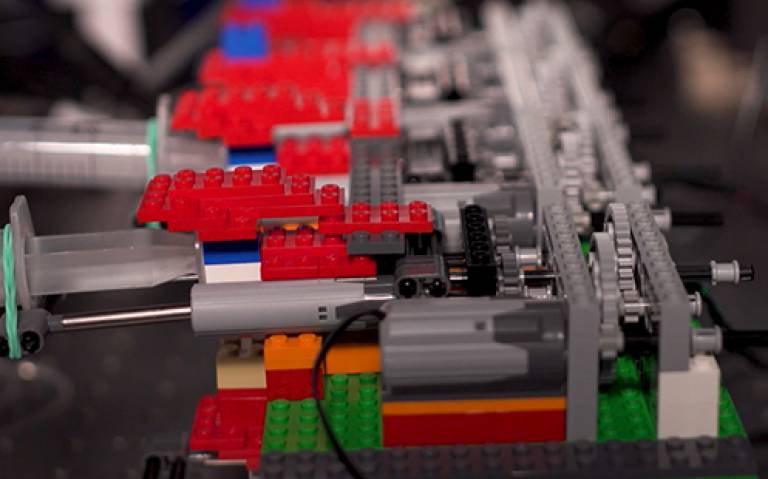 Microscopy is one of the greatest innovations in the history of science. It is a keystone of modern biology, allowing us to observe the complex, transient and dynamic world of cells and tissues, and has been essential in transforming our fundamental understanding of living organisms.

Over the last few years, engineers and biologists have joined forces to develop state-of-the-art microscopes, capable of capturing ever increasing details of cells. These high-performance imaging systems come at a cost, however; they are complex, expensive and inaccessible to many researchers.

An international group of scientists at UCL, the Francis Crick Institute and Aix University in Marseille have taken an alternative, ingenious approach by developing hardware that uses inexpensive LEGO components as its building blocks. In this way, they have created an accessible tool which delivers customisable cutting-edge microscopy at a fraction of the cost.

A new study, published today in Nature Communications, describes how researchers built a novel device with LEGO parts which can be adapted to most microscopes. The device, called NanoJ-Fluidics (and affectionately nicknamed Pumpy McPumpface), enables researchers to observe cells in a highly customisable format.

For the very first time, researchers can observe samples of cells at well-defined moments in time, for example when they are dividing or becoming sick. After an initial round of observation, the LEGO device can manipulate the liquid environment of the cells in a completely automated manner, enabling subsequent imaging of the same cells at a much higher nanoscale resolution.

The LEGO hardware and accompanying software are fully open-source and extensively described in the open access study, allowing researchers all over the world to effortlessly make their own devices for their research purposes.

Dr Ricardo Henriques (MRC Laboratory for Molecular Cell Biology at UCL), said: "We're extremely proud of this work. NanoJ-Fluidics (Pumpy McPumpface) shows that with a bit ingenuity, it becomes possible to build high-performance technology with something as simple as LEGO. Thanks to this, everyone can easily reproduce our LEGO system and apply it to their research using microscopy.

"We've made everything open-source and accessible to the research community through a GitHub website. This research will not only enable unprecedented biological findings, but also inspire future scientists who can now think of LEGO in a new way - to do science!"

Thanks to the open science approach, NanoJ-Fluidics has already been successfully adopted by over 10 laboratories worldwide.