We advocate for the collection of gender-disaggregated data in order to address gender bias and inequalities, which is why we use the term gender-responsive data.

People experience disasters and conflicts differently based on their gender. Often women, gender minorities and other people from marginalised groups are the hardest hit due to their gender roles, social expectations and power relations. Their experience is further worsened because of their lack of presence in decision making. In order to tackle gender inequality as one of the key global challenges, it is crucial to collect gender-disaggregated data. Given the parts of society that are often excluded from day to day engagement and decision making, data collected during disasters and conflicts can be a useful tool for understanding what requirements these groups may have and how best to ensure engagement with them during planning and policy-making to ensure an all-inclusive response. Despite the need and commitment under the Sendai Framework for Disaster Risk Reduction, only a small minority of countries worldwide have allocated resources to collect gender-disaggregated data.

Most of the literature on gender and disasters has taken a binary approach and focused largely on women and girls. Although there is a growing amount of literature now documenting the perspective of gender minorities and the experiences of the LGBTQI+ community, more studies that take an intersectional approach are needed.

The majority of studies rely on qualitative methodologies. However, more gender-disaggregated statistics would complement existing evidence of the gender impacts of disasters.

Lastly, almost half of scientific publications are not open access. 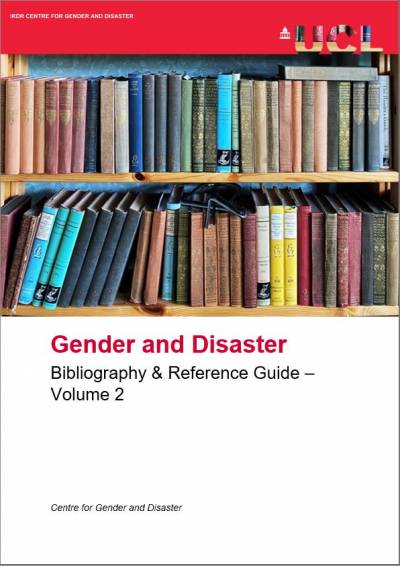 As part of our objective to support the collection, analysis and dissemination of gender-disaggregated data, we regularly publish and update Bibliography guides to share knowledge that builds on gender considerations in disaster settings. A database is also available on the website fo the Gender and Disaster Network.

Reference Guides on Gender and Disaster Series (volume 1 and 2)

The Library of the Women and Resilience to Disasters Knolwedge Hub provides access to over 1,400 key resources (including from PreventionWeb and UN Women). Access the database.