Photographs and text by Vron Ware

On Sunday 18th January 1981 a house fire at 439 New Cross Road resulted in the deaths of 13 young black Londoners as they were celebrating the 16th birthday of Yvonne Ruddock, one of the victims. One survivor died nearly two years later, bringing the official death count to 14.

Concern about racist violence had been running high in the area due to the active presence of fascist groups like the National Front. Several racially-motivated arson attacks had already taken place in the Lewisham area. It was plausible that the tragedy had been caused by a firebomb, a theory that had been advanced by the police in the early stages of their investigation.

The fire came at the end of a decade of conflict between young black people and the police who often treated black victims of crime as criminals themselves. As a result, there was little confidence that the police would act quickly to investigate suspects.

The rallying cry “13 Dead, Nothing Said” refers to the fact that this tragic loss of young black lives was barely noted by the national media, accustomed to portraying black people as trouble-makers and criminals. Nor was there any word of condolence from Margaret Thatcher, the prime minister.

On January 25th, a meeting was called to discuss the response to the tragedy. The New Cross Massacre Action Committee was set up and plans were made for a national demonstration to be held on 2 March. This would be called the Black People’s Day of Action.

The demonstration came to be seen as a political and cultural turning point as thousands of people gathered from all over London and other parts of the country. The march assembled in Fordham Park, New Cross, and, over the course of eight hours, made its way to Hyde Park.

The decision had been taken to hold the event on a Monday to maximise the impact on the city. As the march passed through the streets of south London, many others joined in; workers left their offices and even schoolchildren jumped over fences to take part. 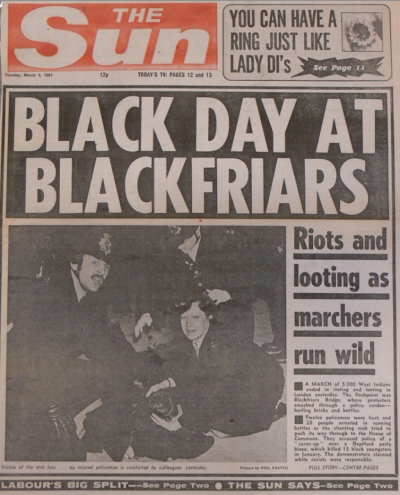 Conflict with the police came at Blackfriars where when they tried to prevent the march from crossing the river and entering the city of London. Despite the confusion, the demonstration was able to press on, taking the protest directly to the home of the British newspaper industry in Fleet Street. A delegation headed by John La Rose went on to deliver ‘The Declaration of New Cross’ to 10 Downing Street, the Commissioner of the Metropolitan Police, and the Houses of Parliament.

The national press headlines the following day were shocking to read as the demonstration was reduced to a riot: “Black Day at Blackfriars,” “Rampage of a Mob,” “Confrontation.”  In contrast, the local press, such as the South East London Mercury, characterised the march as “A Day of Dignity”.

The historic significance of the day was summed up by John La Rose, chair of The New Cross Massacre Action Committee. He concluded that, as a result of this mobilisation, “Black struggles became centre stage in British politics.”