The quantum experiment that could prove reality doesn't exist

Sougato Bose discusses his group’s work on the quantum behaviour of macroscopic objects. 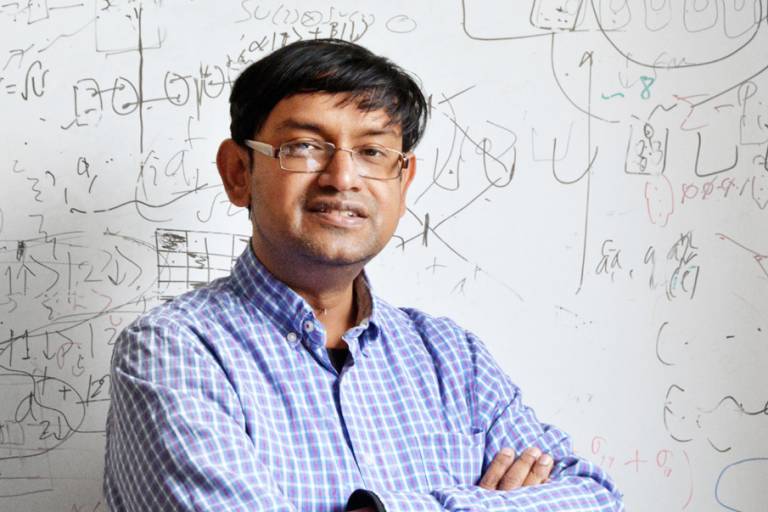 Professor Sougato Bose (UCL Physics and Astronomy and UCLQ) discussed his work in the cover story for the November 6th New Scientist detailing his theoretical work on the Leggett-Garg inequality:

“This inequality was devised in 1985 by Anthony Leggett and Anupam Garg. It looks for correlations between measurements to see whether quantum or classical rules are being followed. But instead of two particles separated in space, like the more commonly known Bell’s inequality, this deals with a single object over time. Because of this, Leggett and Garg realised they could, in theory, test the quantumness of very big objects. In other words, their inequality could tell us whether realism holds true in the everyday world.

It is impossible to drag most quantum systems – which move in discrete steps – into the classical world, where movement is continuous. This makes it hard to examine quantum objects and the stuff we would usually think of as classical in the same experiment. But Sougato Bose, a theorist at University College London, has a plan. He proposes using an experimental set-up that can transcend the classical and quantum worlds.

The set-up he has in mind, a simple harmonic oscillator, comprises an object trapped inside a well, moving back and forth like a swinging pendulum. Precisely how it oscillates depends on whether it obeys quantum or classical rules. And as there is theoretically no limit to how big a simple harmonic oscillator can be, Bose and his collaborators hope to use it to take a leap into the macroscopic world – using a nanocrystal 100,000 times more massive than objects tested by Arndt’s team.

To do this, the researchers’ idea is to look for the swinging nanocrystal when they expect it to be exactly in the middle of the oscillator, on the border between left and right (see “Reality in the balance,”). “We don’t observe, and then we suddenly take a snapshot observation,” says Bose. But crucially, the detector will only be able to see one half of the oscillator. If it sees the nanocrystal, the researchers know it is in that side. If the detector doesn’t, they know it is in the other.

If the crystal is behaving in a classical way, it should be there half of the time on this first measurement. Then, after waiting the time it takes to complete half a swing and so return to the centre of the system, the researchers would measure again and would expect to see it half the time. But if the particle is quantum, the act of not seeing it in one half of the oscillator would collapse its so-called wave function – the mathematical description of the quantum state. Even though we don’t see the nanocrystal, we now know its position, and because of quantum uncertainty, this injects the particle with momentum and changes the way it is oscillating. By repeating measurements at set intervals, the researchers hope to be able to build up correlations that tell them whether the nanocrystal is behaving in a quantum way or classically. The trick in all of this is to throw out the measurements in which the nanocrystal is seen and only keep the ones in which it isn’t, so that the measurements are non-invasive.

Since Bose and his collaborators proposed the experiment in 2018, advances in the trapping and cooling of nanocrystals to avoid decoherence, alongside new precision lasers, mean the idea can now be realised. Teaming up with Hendrik Ulbricht, an experimentalist at the University of Southampton, UK, Bose plans to carry out the test on a nanocrystal made of about a billion atoms. “It’s a big jump,” says Ulbricht.

Only recently have lasers become sharp enough to determine which side of the trap the nanocrystal is oscillating in. Bigger particles are described by smaller waves and so for these nanocrystals, the laser must be able to resolve widths about the size of a water molecule. Ulbricht and Bose expect to have results within the next six months. If the experiment violates Leggett-Garg inequalities, it will break the concept of realism in macroscopic objects.

Still, even if this is the end result, it will be hard to convince everyone that the quantum world extends this far. For one, Leggett-Garg experiments actually test whether a system behaves classically; if it doesn’t, it is assumed to be behaving quantum-mechanically, but that might not truly be the case. Another stumbling block is the array of loopholes that might lead to Leggett-Garg inequalities being violated even though the system is behaving classically. Although measurements should be non-invasive, the practicalities open up so-called clumsiness loopholes. “The stubborn macrorealist cynic could always say: ‘Ah, the measurement itself disturbed the system’,” says Halliwell, who is dreaming up new methods of measurement to avoid such problems.”