Exploring how UCLQ supports innovation from lab to boardroom. 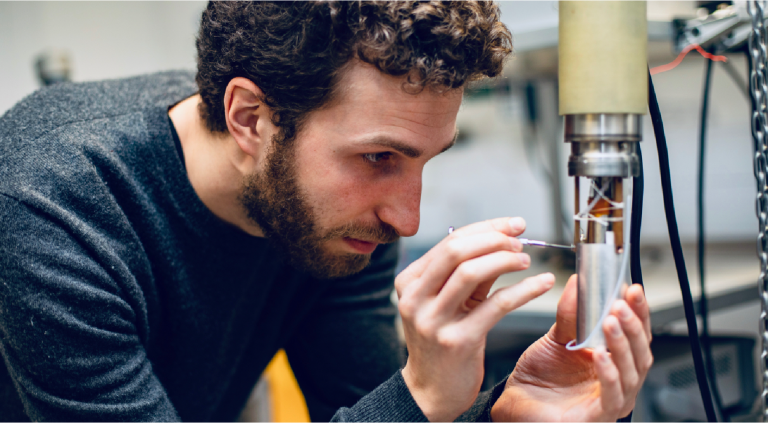 One of the biggest challenges is getting started: when the idea is small, the route to market is unclear, or the next step is uncertain. Helping to develop the quantum technologies ecosystem in the UK is central to our mission at UCLQ. We can achieve this by training and assisting our researchers and students to start-up and spin-out companies. Our aim is to provide a network for researchers and industry partners to interact, innovate and create exciting commercial opportunities across the broad spectrum of quantum technologies.

That’s why we here at UCLQ set up the UCLQ Innovation Project fund with the help of EPSRC, the UCL Technology Fund and the intellectual property business, the IP Group. UCLQ invited proposals for early proof-of-concept and demonstrators projects in quantum technologies from UCLQ staff and students. The selected proposals gained up to £50k of support with the option of further funding (up to a total of £150K) through our venture capital partners. This funding helped run short 6 – 12-month projects that developed demonstrators into businesses.

“The UCLQ Innovation Fund has been great! We won £50k innovation funding and we also received useful mentoring from John Morton, UCLQ’s director. It’s been really useful to also make contacts with other early stage start-ups through UCLQ as we’re all facing similar obstacles,” said Oscar Kennedy, a UCLQ post-doctoral fellow and co-founder of AmP (Amplify my Probe) one of the companies selected to receive funding from the Innovation fund.

AmP is just one of companies that have links to or has benefited from support from UCLQ. Over the next few pages we explore a selection of our start-ups and spin-outs, and how they have grown with UCLQ.

Quantum computers promise to solve some of the most challenging computational problems, such as revolutionising communications and the search for new materials, chemicals and medicines. However, to tackle the most demanding computational simulations, it is thought that a large-scale fault-tolerant quantum computer might ultimately require 10 million quantum bits (qubits)- a much larger number than current technology can support.

Research led by Quantum Motion founders, Professor John Morton (UCL) and Professor Simon Benjamin (University of Oxford) explores silicon spin qubits, one of the promising candidates for large-scale quantum computing. Professor Morton says: “Silicon electronics has already transformed our society over the past decades, and it has huge potential to deliver the scalable platform that can realise the most profound impacts of quantum computing.”

Quantum Motion builds on the research completed at UCL Quantum Science and Technology Institute and the University of Oxford. Their patented silicon spin-based qubit architectures combine conventional and quantum devices in a processor using complementary metal-oxide semiconductor (CMOS) technology. CMOS fabrication is already used to manufacture the processors in smartphones and computers where millions of bits are used in computation. Using CMOS for quantum computing will lead to a reduction of the production cost and facilitate commercialisation at scale in the future.

Founded in 2017, Quantum Motion has quickly established itself with over twenty employees and is now recruiting quantum engineers and integrated circuit engineers at pace. After announcing an £8m series A round of investment in 2019, Commercial Director James Palles-Dimmock said of the relationship with UCLQ: “It’s been excellent! Through UCLQ we have had access to a pipeline of exceptional students through co-funding PhDs at UCL.” In addition, he said that Quantum Motion cannot overestimate how valuable the access to UCL’s world-leading labs (via the QUES2T facility) has been.

Quantum Motion was one of the first companies to utilise the QUES2T facilities at UCL, using the dilution fridges at the London Centre for Nanotechnology to test prototypes. Quantum Motion are now looking to expand into their very own labs in the next year.

Rahko was founded in mid-2018 when CEO, Leo Wossnig, and CSO, Ed Grant, first met and worked together in their PhD programs at UCL. Rahko CSO Ed Grant undertook his PhD within the UCL hosted EPSRC Centre for Doctoral Training (CDT) in Delivering Quantum Technologies. This highly multidisciplinary program provided broad learning and development opportunities. For more information about our CDT see page 40.

Since its founding, the company has attracted significant interest and has partnered with Microsoft, Nvidia and IBM. Rahko describes itself as a quantum machine learning (QML) start-up. The company is focused on developing machine learning software to run on the first generation of truly practical quantum computers, which will be available in the near term, to help solve industry problems.

Rahko has had a wide range of support from UCL, including two incubators. The first was the UCL business incubator, The Hatchery at Base KX (King’s Cross, London), where they were connected with a business advisor, given free office space and provided with ongoing learning opportunities tailor-made for early-stage ventures. Their second engagement with UCL’s incubation projects came with Conception X – a programme piloted by UCL Engineering.

Conception X was set up with the goal of helping students commercialise their PhD research while on their programmes, and has since undergone expansion to become an independent not-for-profit guiding doctoral candidates from any UK university in accessing industry, with backing by Barclays’ Eagle Labs and Deloitte. At Conception X, Rahko drew on a wide range of support, skills training in raising investment and introductions to a broad range of investors.  While there, the team met entrepreneur Ian Horobin who joined as co-founder and Executive Chair, building on a team that now includes Dr Peter Mountney (Royal Society Entrepreneur in Residence at UCL), and Professor Jonathan Tennyson (Quantemol; Massey Professor of Physics, UCL) as advisors.

Following the incubation stage, the team were supported by UCL Innovation and Enterprise, and the then European Enterprise Network in areas such as intellectual property strategy and European grant funding opportunities - the latter affording valuable introductions to potential partners. Rahko, like many others from industry, have also engaged with many of the promising job candidates at UCL’s student jobs fairs and, like the companies explored above, are already working themselves to nurture the next generation of quantum scientists, co-sponsoring two CASE PhD Studentships with UCL Physics.

The human connections found through UCLQ are, COO Miriam Cha stresses, vital: “We have had access to vast networks of academic and industry collaborators through UCL, and enjoyed entrepreneurship support through many offices at UCL, even beyond the incubators we were accepted into. UCL and UCLQ have very strong networks with many of the key organisations in the field of quantum computing and in the industries we are targeting. This access has been and continues to be highly valuable to us.”

Having raised a seed round of £1.3m led by Balderton Capital in mid 2019, the team at Rahko are currently preparing for some exciting business and client announcements, while continuing their work in accelerating and unlocking drug discovery with AI and quantum computing, solving complex, real-world problems of global customers in the pharmaceuticals industry.

Phasecraft is one of the UK’s emerging quantum software start-ups will use quantum technology to overcome limitations in battery material designs and help predict their performance. This could break new ground in battery development across sectors from large-scale energy storage and high-performance electric vehicles, as well as lead to the development of more powerful battery devices.

Started by internationally renowned quantum scientists Toby Cubitt (UCL), Ashley Montanaro (University of Bristol) and John Morton (UCL), its team of talented quantum theorists have been researching and applying quantum theory for decades, leading some of the top global academic teams and research in the field. Phasecraft has established partnerships with leading quantum hardware companies, including Google and Rigetti, industry partners, such as Johnson Matthey, and leading academics, to establish a new era of computing. Through deep understanding of quantum theory and the needs of potential end users, Phasecraft applies its world-leading quantum computing expertise to bridge the gulf between hardware and applications, speeding up the quantum computing timeline.

Toby Cubitt, Phasecraft Founder and UCLQ Researcher said: “In just the first twelve months and with a tiny but talented team, we made breakthroughs that led us to the world’s best algorithms and encodings for all key technologies required for quantum simulation. These types of breakthroughs bring forward by years the date when quantum hardware can first tackle commercial applications that are beyond classical computing technology. Bringing together a bunch of smart people, creating a culture that inspires them to find innovative solutions, and working together to tackle the biggest challenges, it’s amazing what ensues.  I can’t wait to see what this team achieves together in the years ahead!”

John Morton, Director of UCLQ and Phasecraft Founder: “Already in the past two years quantum hardware has surpassed expectations, achieving milestones that seemed decades away. By pioneering new advances in quantum software, Phasecraft can take quantum theory from research to reality, faster. With new funding and supporters, we can be part of building the foundations of the quantum computing industry, making useful applications available quicker than ever thought.”

On the back of new quantum algorithm breakthroughs in 2020, Phasecraft closed the largest seed funding round for a UK quantum computing company. Its £3.7m seed funding round was led by VC firm LocalGlobe with Episode1 along with previous investors. Phasecraft previously raised a £750,000 pre-seed round led by UCL Technology Fund with Parkwalk Advisors and London Co-investment Fund, and has earned several grants facilitated by InnovateUK.

Phasecraft have also recently brought on-board Ian Hogarth (the prominent angel investor and co-founder of Songkick) as board chair, and are recruiting post-doctoral scientists at a brisk pace to continue to build on their expertise in quantum information, quantum computation, condensed matter physics, and materials science. As with UCLQ and their other spin-outs and start-ups, Phasecraft are keenly focused on nurturing the next generation of quantum scientists and are sponsoring three PhD students in UCL’s EPSRC-funded CDT in delivering quantum technologies.

As Fortune magazine explained in a recent focus piece, the unique focus of Phasecraft is drawing investor attention by working on real problems with practical applications. Hartmut Neven, Head of Google’s Quantum Artificial Intelligence Lab, has said that: “Sooner or later, quantum computing is coming. Developing the algorithms and technology to power the first commercial applications of early quantum computing hardware is the toughest challenge facing the field, which few are willing to take on. We are proud to be partners with Phasecraft, a team that are developing advances in quantum software that could shorten that timeframe by years.”

AmP (Amplify my Probe) is a start-up that features three of the coming generation of quantum researchers – two UCLQ post-doctoral fellows Oscar Kennedy and Mantas Šimėnas, and James O’Sullivan, a current CDT student. They are transforming their prototype electron spin resonance (ESR) probehead equipped with a cryogenic low-noise amplifier into a commercial product.

As Co-founder Oscar Kennedy has said, they are still in the early stages as a company, finessing their product for the market.  In their first year of operation they have secured £50K of funding via the UCLQ Innovation Fund, launched online, and had the paper detailing their work published.

One of the purposes of UCLQ is to provide a network for quantum scientists to meet, collaborate, mutually support and encourage, and AmP have found that contacts made via UCLQ with other start-ups such as Zero Point Motion have been particularly useful as they move into industry.

For the immediate future, AmP’s co-founder Mantas Šimėnas feels considerable optimism: “Over the next year we’re going to get our final product ready to sell, fully tested and make our first sales. We want to have amplified probes doing real experiments in labs internationally by the close of 2021. We’re thinking about new product lines, so stay tuned.”

Find out more about UCL’s quantum start-ups and spin-outs.