In the media: News round-up

This year has seen stories about quantum computing capture the mainstream after Google’s announcement on quantum ‘supremacy’. 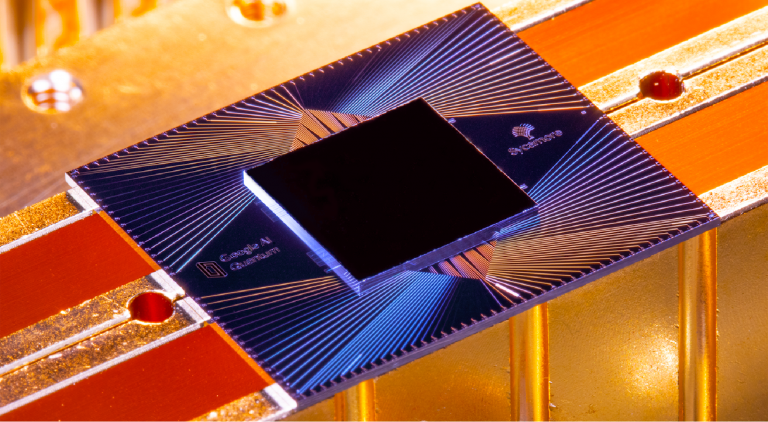 Google’s researchers reported that they were able to create quantum states on 53 qubits, corresponding to a computational state-space of dimension 253 (about 1016), and that their processor takes about 200 seconds to sample one instance of a quantum circuit a million times. They asserted that this sampling task demonstrates the experimental realisation of quantum supremacy because by Google’s estimate an equivalent task by a state-of-the-art classical supercomputer would take approximately 10,000 years.

However, a competing research group at IBM questioned Google’s breakthrough in a blog post, stating that “an ideal simulation of the same task can be performed on a classical system in 2.5 days and with far greater fidelity.” Further noting that, “This is in fact a conservative, worst-case estimate, and we expect that with additional refinements the classical cost of the simulation can be further reduced.”

UCLQ researcher Ciarán Gilligan-Lee said to New Scientist, “The type of quantum supremacy that Google and IBM are chasing here is really a moving target”. As quantum computers improve over time, so do classical computers – there’s always a new classical algorithm to test against the quantum ones, so the bar for quantum supremacy is continually raised. “Classical computers have such a large suite of things built into them that if you don’t utilise every single thing you leave yourself open for a tweaked classical algorithm to beat your quantum one.”

Jonathan Oppenheim, a researcher at UCLQ, said to The Telegraph that the problem was with the phrase ‘quantum supremacy’. Although the term is widely used in the field, it implies that quantum computers are now better than traditional computing. He also noted that: “While [Google’s result] is a milestone, it is very far from being a quantum computer that can compute anything useful.”

UCLQ’s Toby Cubitt said to Wired UK that the test for quantum supremacy should aim “to be something that gives you very high confidence, more than we’ve ever had before that quantum computer is doing something computationally that cannot be replicated on a classical computer.”

But UCLQ’s Ciarán Gilligan-Lee said that, even if you accept IBM’s claims at face value, Google’s quantum computer is still a big step forward.

“IBM is claiming that, even when running world’s largest computer for 2 and half days, and running petabytes of memory, they can simulate what the quantum chip does in 200 seconds. When you put it into context, it is still a pretty impressive achievement.”

UCLQ director John Morton says that, “Now that we know that even these relatively small-scale quantum processors can outperform vast supercomputers, the challenge is working out how to harness this power through customised quantum algorithms addressing real-world problems. Google’s milestone of achieving quantum supremacy marks the starting gun in the race to develop practical quantum computing applications for today’s noisy, intermediate-scale quantum computers.”

In January 2020, UCLQ was featured in The Guardian discussing the skills shortage in quantum computing:

“There is a laboratory deep within University College London (UCL) that looks like a cross between a rebel base in Star Wars and a scene imagined by Jules Verne. Hidden within the miles of cables, blinking electronic equipment and screens is a gold-coloured contraption known as a dilution refrigerator. Its job is to chill the highly sensitive equipment needed to build a quantum computer to close to absolute zero, the coldest temperature in the known universe. Standing around the refrigerator are students from Germany, Spain and China, who are studying to become members of an elite profession that has never existed before: quantum engineering. These scientists take the developments in quantum mechanics over the past century and turn them into revolutionary real-world applications.”

In the article Quantum Motion, a UCLQ start-up, comment on what analysts call the “quantum bottleneck” - where the demand for quantum engineers outstrips the number available:

“The lack of access to a pipeline of talent will pose an existential threat to our company, and others like it,” says James Palles-Dimmock, commercial director of London- and Oxford-based startup Quantum Motion. “You are not going to make a quantum computer with 1,000 average people – you need 10 to 100 incredibly good people, and that’ll be the case for everybody worldwide, so access to the best talent is going to define which companies succeed and which fail.”

Professor Paul Warburton, Director of UCLQ’s EPSRC Centre for Doctoral Training in Quantum Technologies argues that to meet this demand we need a broader range of skills:

“We are still overwhelmingly recruiting physicists,” says Paul Warburton. “We really need to massively increase the number of PhD students from outside the physics domain to really transform this sector.” The second problem, according to Warburton, is competition with the US. “Anyone who graduates with a PhD in quantum technologies in this country is well sought after in the USA.”

Warburton concludes that the UK needs to train its own quantum engineers:

“We can’t rely on getting our technology from other nations. We need to have our own quantum technology capability.”

Read the article, ‘How can we compete with Google?’: the battle to train quantum coders, in full online at The Guardian.