UCLQ researchers demonstrate that quantum sensors have the required sensitivity and stability for electromagnetic induction imagining of the heart. 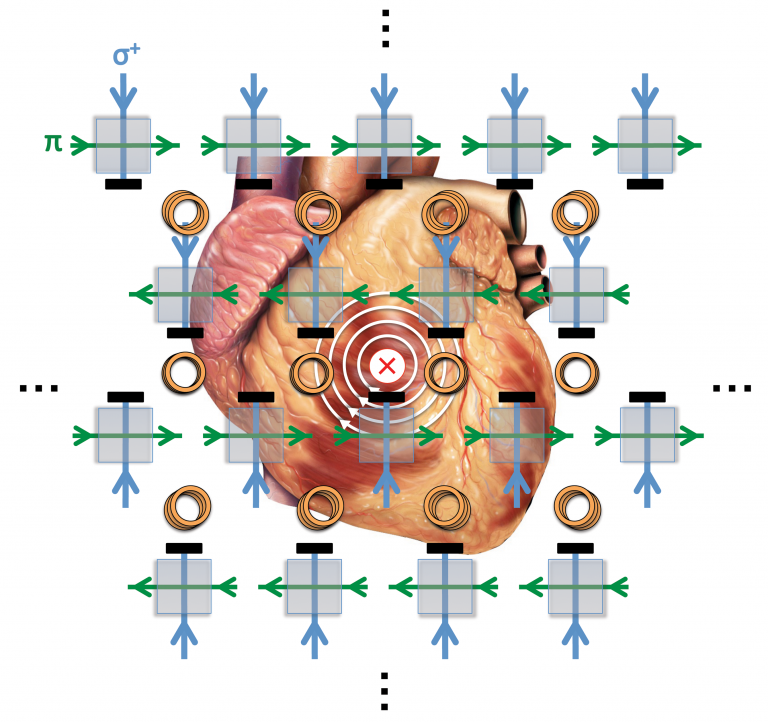 Imaging is one of the most powerful tools for biomedicine and healthcare. However, no imaging technique is universal. None of the currently available technologies can provide maps of the dielectric properties, and in particular the electric conductivity, of biological tissues. This can limit the possibilities of healthcare professionals, in particular for certain conditions such as atrial fibrillation.

Atrial fibrillation is a condition of the heart which causes the normal electric activity of the heart to be altered and partially disrupted. As a consequence, the cardiac rhythm becomes irregular and faster during a crisis. It is considered one of the main causes of morbidity and mortality in developed countries. While the causes of atrial fibrillation are unknown, the condition affects around one million people in the UK with cases predicted to rise at a great cost to the NHS.

The new quantum technology demonstrated by UCLQ researchers could be used to non-invasively image the conductivity of living organs, such as the heart. Their system uses quantum sensors called atomic magnetometers in the magnetic induction tomography configuration.

Based on a radio-frequency atomic magnetometer, their system operates using an atomic vapour of rubidium at room temperature. One of the researchers, Dr Luca Marmugi said:

““In a vapour atomic spins are randomly orientated. You can think of any atom as a tiny compass flying around at roughly 300 metres per second, but by using lasers to perform optical pumping we can align the spins. This effectively polarises the atomic vapour, making it extremely sensitive to external magnetic fields.”

The team used these “tiny atomic compasses” to image solutions with a conductivity comparable to that of live tissues, down to 0.9 Siemens per metre and to a resolution of one cm. These solutions were 5 ml in volume each to match the expected need of applications in atrial fibrillation diagnoses. Alongside the extreme sensitivity of their quantum sensors, their system is capable of imaging for several days in an unshielded environment.

In 2016, UCLQ researchers Renzoni and Marmugi proposed their novel diagnostic and guidance tool for atrial fibrillation. However, at the time neither they nor others in the field had demonstrated the required sensitivity and stability to image biological tissues.

By December 2018, after a number of upgrades, they reached the sensitivity required to image conductivities down to 50 Siemens per metre using a single sensor and in an unshielded environment, making it one of the most sensitive magnetometers of its kind deployed at the time.

However, it is only demonstrated with their result today - being able to detect conductivity at less than one Siemens per metre, an improvement of 50 times on previous imaging results - that their technique is sensitive and stable enough to be used to image biological tissues in a clinical setting.

Co-author and group leader, Professor Ferruccio Renzoni (UCL Physics & Astronomy), said: “Magnetic induction tomography – also known as electromagnetic induction imaging – with atomic magnetometers has been successfully used in a range of practical uses such as non-destructive evaluation, material characterisation, and security screening, but this is the first time that it’s been shown to be useful for biomedical imaging. We think it will be safe to use as it would expose organs, such as the heart, to one-billionth the magnetic field commonly used in MRI scanners.

““We’ve achieved a phenomenal level of sensitivity in an unshielded, room temperature environment, which brings us a lot closer to bringing this technology to the clinic. It was only possible by using quantum technologies and we are excited about the potential applications for improving clinical outcomes of atrial fibrillation.”

Using quantum sensors to map conductivity in the heart

For more information and other research by this team visit the UCL Laser Cooling group’s webpage.