The UK government has announced 38 new UK projects that will benefit from more than £70 million government investment. 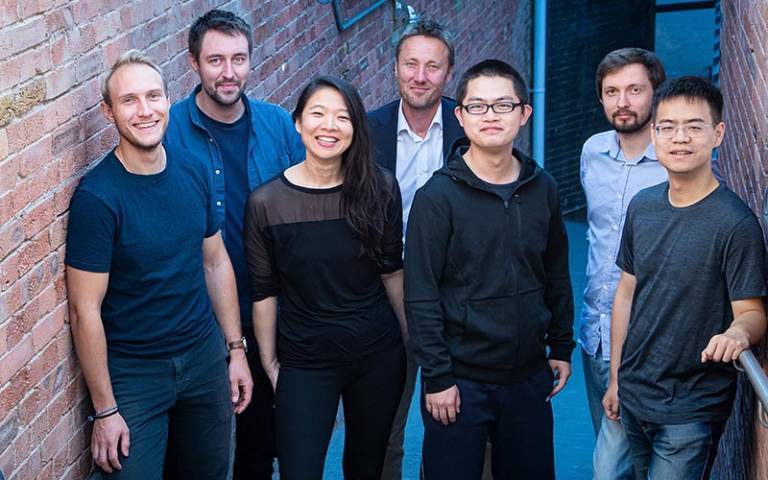 UCLQ spin-outs are among the 38 projects that will benefit from more than £70 million government investment in quantum technologies.

The new projects aim to solve global challenges and address key industrial challenges, from developing batteries for electric vehicles to innovating energy storage systems that will reduce greenhouse gas emissions, via the use of advanced quantum technologies.

Rahko was founded in mid-2018 by UCL Computer Science PhD students Leo Wossnig and Ed Grant, alongside Miriam Cha and Ian Horobin. Since then, the company has attracted significant interest and has partnered with Microsoft, Nvidia and IBM. Rahko describes itself as a quantum machine learning (QML) start-up. The company is focused on developing machine learning software to run on the first generation of truly practical quantum computers, which will be available in the near term, to help solve industry problems.

Quantum Motion Technologies is developing a scalable array of qubits based on the ubiquitous silicon technology already used to manufacture the chips in smartphones and computers. Based on UCLQ and University of Oxford research, the spin-out is developing fault tolerant quantum computing architectures that are compatible with the CMOS process. CMOS fabrication is already used to manufacture the processors in smartphones and computers where millions of bits are used in computation. Using CMOS for quantum computing could lead to a reduction of the production cost and facilitate commercialisation at scale in the future.

Phasecraft, one of the UK’s emerging quantum software start-ups will use quantum technology to overcome limitations in battery material designs and help predict their performance. This could break new ground in battery development across sectors from large-scale energy storage and high-performance electric vehicles, as well as lead to the development of more powerful battery devices.

The funding received by UCLQ spin-outs is part of a wider £1 billion government and industry investment to commercialise quantum innovations and secure the UK’s status as a world-leader in quantum science and technologies.

The £70 million government investment is part of its Quantum Technologies Challenge, led by UK Research and Innovation (UKRI). The projects involve over 80 companies and nearly 30 universities and research organisations across the UK including University College London. The grants that have been awarded will be matched with over £30 million of private investment into the sector, driving the UK’s leading position in quantum technologies.