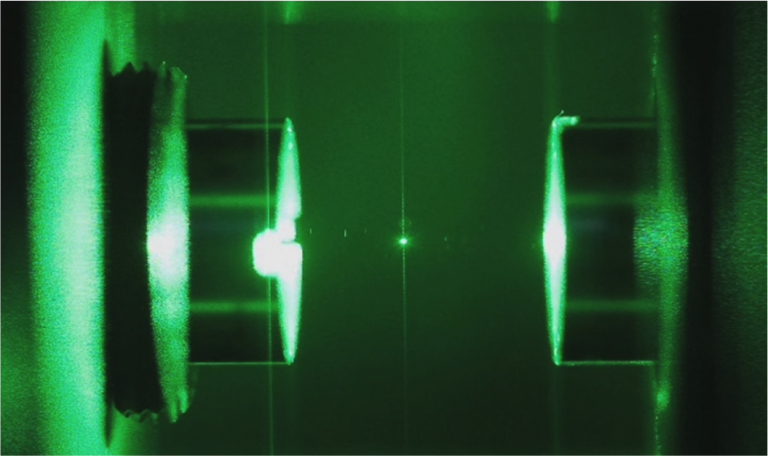 Optical trapping, using tailored laser light, is an increasingly important technique for controlling and probing matter near the quantum regime. One arrangement of light used in optical trapping is an optical tweezer. It uses forces exerted in a strongly focused beam of light to trap and move tiny particles.

Optical tweezers' unique ability to manipulate small pieces of matter has led to widespread applications in biology, such as sub-cellular engineering, and material science, where the technique can be used to develop new fabrication techniques.

Usually optical tweezers are formed using expensive laboratory equipment. However, researchers from UCL have demonstrated, in a study published this week in Optica, a new method that makes use of broadband light. The new method combines trapping and controlling nanoparticles with optical tweezers and femtosecond lasers, to design a new cost-effective method for levitating particles.

Instead of using monochromatic lasers, the team at UCL used a thermal light source that produces broadband light. Using femtosecond laser technology, the broadband light can be focussed to create optical tweezer potentials.

A tuneable filter, similar to those used in ultra-fast laser pulse shaping, helps manipulate the optical tweezers quickly and can be used to produce almost any desired shape of optical potential. The experiment model devised by the team, will now allow for the modulation of the shape of the potential easily and quickly in approximately 100 nanoseconds.

Parametric feedback cooling is also used to control the temperature of the trapped nanoparticles. Cooling is required to ensure trapped particles can be held in a low energy quantum state. Researchers found the new method to be as effective as using a conventional laser trap.

Optical potential can be imagined as a mountain with dips and hills. A trapped nanoparticle with low energy, will reside in the dip, and can rise or fall back. Researchers can control this landscape of potential, to manipulate the particle. The faster the ability to change the optical potential the easier it will be for researchers to evidence superposition of macroscopic particles.

To produce a superposition – a quantum phenomenon where the particle is essentially in two places simultaneously - you have to cool the trapped nanoparticle to the very bottom of the potential well created by the optical tweezers to create a quantum system.

Co-author, Professor Peter Barker (UCL Physics & Astronomy and UCLQ), said: “Using optical tweezers we could study the superposition of larger masses. This helps researchers probe the boundaries of quantum mechanics and could aid in the design of future quantum technologies. Normally when you try to produce a macroscopic superposition it’s very small, and you need to expand the size of the superposition to evidence its creation. But, the problem is you have a finite amount of time to do this, because decoherence will destroy the quantum states. So, if you’re going to do anything, you need to do it quite quickly, and one way of doing that is to be able to quickly change the shape of the optical potentials that hold the particle.”

A major achievement of the project is that the method devised is relatively inexpensive. Corresponding author Dr Anishur Rahman (UCL Physics & Astronomy and UCLQ) said: “The simplistic and accessible design allows for the optical tweezers to be adapted for application in several other fields like biology, chemistry or rheology. It also reduces the costs of this experimentation to around a couple of hundred pounds as compared to ten thousand pounds.”

This article was writen and produced by Priyanka Dasgupta, a MSc Science Communication student from Imperial College London.