Blog and video: Ask the experts: legal and constitutional implications of Brexit

On 13 June UCL Public Policy and House of Commons Library jointly hosted an ‘Ask the Experts’ event on the legal and constitutional implications of Brexit. The panel consisted of specialists from both institutions. Marc Phoon reports.

The possible economic and social consequences of Brexit were central features of the referendum debate and continue to be discussed widely. However, of equal importance are the legal and constitutional implications of Brexit, which may very well underpin the long term outcomes of the Brexit negotiations. ‘Ask the Experts: Legal and Constitutional Implications of Brexit’, an event jointly hosted by UCL Public Policy and the House of Commons Library on 13 June, aimed to provide some clarity on this matter.

The panel consisted of staff from both the House of Commons Library and UCL. Vaughne Miller is the Head of International Affairs and Defence at the House of Commons Library and an EU law specialist. She was joined by two of her colleagues, Arabella Lang, a treaty specialist and Jack Simson Caird, a constitutional law specialist and UCL alumnus. Ronan McCrea, a Senior Lecturer from the Faculty of Laws and Christine Reh, Reader in European Politics from the Department of Political Science, both based at UCL, completed the panel. Meg Russell from the Constitution Unit chaired the event. In introducing the panel, she emphasised the high-quality, reliable and digestible briefings publicly available from the House of Commons Library, as well (of course) as the materials available from the Constitution Unit, the UCL Brexit Hub and other UCL experts.

Ask the experts: legal and constitutional implications of Brexit

Vaughne Miller kick-started the discussion by offering an overview of the differing approaches taken by the EU and the UK government ahead of the Brexit negotiations. The EU, through the European Commission and European Council, has already set out its priorities for the negotiations. It is particularly concerned with issues related to EU citizens’ rights post-Brexit, the border between Northern Ireland and the Republic of Ireland and the so called ‘divorce bill’ – i.e. the financial settlement between the UK and the EU. She noted that the EU has a clearer position than the UK government because of the EU’s laws on transparency, which mean that the majority of the negotiation guidelines coming from the EU will be publicly available.

Miller went on to explain that it is not yet clear how the UK parliament is going to be kept informed about the progress of Brexit negotiations. The government has indicated that the UK parliament will be kept at least as informed as the European Parliament. Nevertheless, MPs have signalled their expectations on this matter through a report published by the European Scrutiny Committee. Furthermore, because of the general election and summer recess, there are concerns about whether there will be adequate parliamentary scrutiny of the early stages of the negotiations. Notably, select committees in the Commons which scrutinise government departments are not likely to be properly established until September this year.

Christine Reh, an expert on EU institutions, emphasised that the EU is not a monolith but is made up of many institutions as well as 27 sovereign states. As a consequence, the EU’s approach to the negotiations is designed such that it can accommodate adversity and make internal agreements possible. She also reminded the audience that Brexit is just one of many things on the EU’s agenda, given that it already has may other existing initiatives and commitments. All of this points towards the EU being used to dealing with complex negotiations, both internally and externally, which could play to its advantage.

Finally, Reh argued for the need for political will and flexibility among the negotiating parties. Since EU treaties are incomplete contracts, political and institutional solutions can be found through wide legal interpretations of treaty clauses, provided that there is political will to do so. She pointed towards Article 217 of the Lisbon Treaty, which states that ‘The Union may conclude with one or more third countries or international organisations agreements establishing an association involving reciprocal rights and obligations, common action and special procedures’, as a highly flexible clause for both sides because it can accommodate any negotiation outcome. Reh also cited past instances such as the Eurozone crisis where divergence in interests and policies were able to be reconciled.

Areballa Lang, a treaty specialist, explained that in the immediate aftermath of the referendum parliament was almost paralysed by the traditional view that treaties were meant to be dealt only by the government. However, the judgement in the Supreme Court Miller case has emboldened parliament to seek a greater role in treaty negotiations. This has subsequently led to significant increase in interest and debate on this issue, especially during the passage of the Article 50 Bill. Lang went on to argue that, as a result of the new hung parliament, the balance of power has now further shifted away from the government and towards parliament.

Lang then proposed several possible mechanisms for parliament to exercise its scrutiny role in treaty negotiations. Apart from dedicating more parliamentary resources and time to scrutinising treaty negotiations, parliament could go one step further by creating a parliamentary committee specifically for treaties and insisting that MPs be directly involved in treaty negotiations. Additionally, parliament could exercise so far unused powers given to it in 2010 allowing it to change (increase) the requirements needing to be met for it to consent to treaties. Nonetheless, Lang did suggest that increasing scrutiny of treaties could come at the cost of less time for scrutiny on other aspects of Brexit such as the Great Repeal Bill. There are also concerns about the implications in the event that parliament votes down a treaty laid before it.

Ronan McCrea drew the audience’s attention to what the referendum result has revealed about the UK constitution and the potential legal issues which may arise if the UK no longer wants be under the jurisdiction of the European Court of Justice (ECJ). He argued that the legal uncertainty caused by the referendum is a result of the uncodified nature of the British constitution. While the British constitution has the advantage of being flexible, it is unsuited for referendums – as the government need not specify in advance of the vote the precise legal form that the necessary constitutional change would take. As a result, basic issues such as what form Brexit will take, the legal aspects of repealing the European Communities Act 1972 and whether the UK will remain in the single market were only properly discussed after the referendum result. He proposed that if referendums are going to be a part of the UK’s constitutional architecture, there needs to be a convention that requires the proposed legislation to give effect to the result of the referendum to be set out in advance of the vote.

Another issue highlighted by McCrea was the potential legal problem which may arise if the UK wants to remain in the single market but at the same time does not want to be under the jurisdiction of the ECJ. This is because any deal struck between the UK and EU will be under the aforementioned Article 217 of the Lisbon Treaty, which is a provision of EU law. The ECJ had previously ruled that any international agreements under this provision will need to respect ECJ powers as the supreme interpreter of EU law and respect the autonomy and unity of EU law. Hence, any agreement on the single market without recognition of ECJ’s interpretation of rules of the single market would breach the conditions set out by ECJ and likely be overturned.

Continuing on the topic of the UK constitution, Jack Simson Caird focused his discussion on the so-called ‘Great Repeal Bill’ and what form it might take (he has explored this in more detail in a Commons Library briefing paper). He began by stressing the constitutional significance of the bill, given that one of its purposes is to repeal the European Communities Act 1972, which can be considered among the most important legislation of the 20th century. At the same time, the bill also aims to provide legal certainty by ensuring that all EU legislation is adapted in as ‘smooth’ a way as possible on the day that the UK leaves the EU. Therefore, Simson Caird suggested that the bill needs to include principles which specify how EU law will operate in the UK on that day. He argued that drafting the bill will be particularly challenging because there may be tensions between these two aims.

Provisions for delegated powers, which give the government the right to make detailed rules in specific areas with no or limited reference to parliament, are expected to have a significant role in the drafting of the bill. There are strong arguments for including these provisions, due to the uncertain nature of leaving the EU, the volume of policy versus the time pressures, and the need to avoid legal chaos. Nevertheless, there are concerns that these provisions can lead to major statutory change without parliamentary scrutiny. The government has responded to these concerns by saying that it will use delegated powers only to make technical changes and that major policy changes will be presented in substantive bills, with full parliamentary oversight. However, what constitutes a technical change rather than a substantial policy change is not always so clear.

Vaughne Miller is Head of International Affairs and a defence and EU law specialist at the House of Commons Library.

Dr Christine Reh is Reader in European Politics at UCL.

Arabella Lang is a treaty specialist at the House of Commons Library.

Dr Ronan McCrea is a Senior Lecturer in Law at UCL.

Dr Jack Simson Caird is a constitutional law specialist at the House of Commons Library.

Marc Phoon is a Research Volunteer at the Constitution Unit. 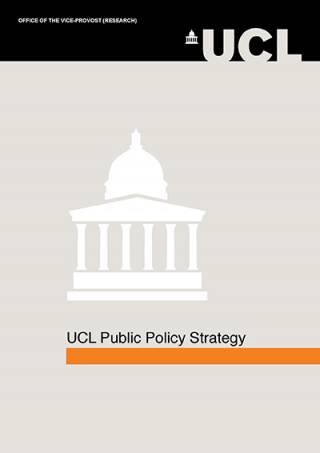 UCL is committed to using its expertise to address complex policy problems, and as a force for positive social change. The UCL Public Policy Strategy sets out our university’s vision for public policy engagement. Find out more

Subscribe to our newsletter to receive regular updates on UCL research, analysis and work with public policymakers.