MOAM is a randomised controlled trial across thirteen sites investigating whether Mentalization Based Therapy (MBT) adapted for individuals with antisocial personality disorder (MBT-ASPD) is an effective treatment for individuals with a diagnosis of antisocial personality disorder (ASPD) in the community when compared to Probation as Usual (PAU). Data collection for the trial concluded in Autumn 2021 and the results are currently in the process of being prepared for publication.

MBT is a psychological treatment that is based on the idea that we all want to be understood. "Mentalization" is how we understand other people by having an idea of what they are thinking and feeling, and the reasons for their behaviour. Mentalization Based Therapy integrates cognitive and relational components of therapy and has a theoretical basis in attachment theory. MBT-ASPD targets mentalizing problems which lead to violence through a programme of group and individual psychotherapy.

This pilot project suggests that MBT could be introduced to NHS services relatively easily and inexpensively, and that it may have the potential to enable clinicians to work with people with ASPD significantly more effectively to reduce antisocial behaviour and offending.

Antisocial personality disorder (ASPD), which is characterised by the failure to conform to social norms with respect to lawful behaviours, is substantially overrepresented in offending populations.

ASPD has been associated with an increased likelihood of committing violent behaviours and re-incarceration. It has been linked with a range of negative impacts, such as affecting the health of the wider public, and large costs to society, including large costs to the criminal justice system and NHS. It has also been shown to have major public health implications due to its associations with comorbid psychiatric illness and physical illness.

There is currently no treatment with a robust evidence base for alleviating ASPD.

What is the MOAM trial?

MOAM is a multisite randomised controlled trial conducted in a real-life NHS setting to investigate whether, in a sample of offenders under community supervision who meet DSM-5 criteria for ASPD, probation as usual (PAU) supplemented with MBT is more effective and cost- effective than the standard care pathway of PAU in (1) reducing aggressive antisocial behaviour, (2) improving health status and quality of life, and (3) reducing offender, impulsivity, violence and criminal behaviour. Participants were randomly allocated in a 1:1 ratio to receive either PAU only or MBT plus PAU. The research was conducted as a multi-site, two arm, three phase pragmatic randomised controlled superiority trial, with data collected over 60 months in collaboration with the National Probation Service NHS Providers.

Measures and objectives of the trial

The main objective of the trial was a reduction in the frequency of aggressive acts committed by individuals with ASPD taking part in the MBT intervention. In addition to this, individuals were assessed for other offending behaviour, anxiety and depression, drug and alcohol use, self-harm and suicidality, quality of life, health and functioning, impulsivity, and personal beliefs. A further cost-benefit analysis was conducted by monitoring the participants' use of other health and social services and reoffending rates, in order to assess whether MBT-ASPD is more cost efficient in comparison to PAU.

It was expected that participants would benefit from MBT-ASPD by a measured improvement in their ability to anticipate actions triggered by social stressors and a better ability to manage their affect. It’s anticipated that this will result in an overall reduction in the frequency of violent and aggressive acts, and an improvement in psychosocial functioning. 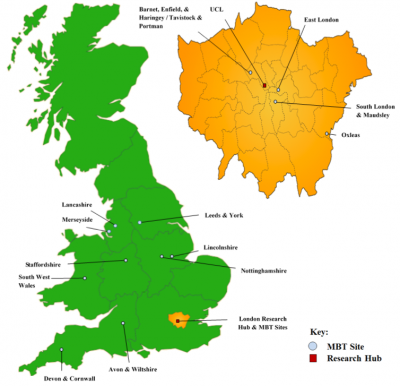 In total, 313 participants were recruited into the trial from 13 sites. Offender Managers identified potential participants and sent referrals to Specialist Offender Managers co-working with MBT therapists in each probation service. A clinical assessment would then be carried out by the MBT team, which included history taking, establishing a clinical diagnosis of ASPD, and ascertaining the participant’s ability to engage in the treatment process. At this stage, participants would then complete final screening assessments by an assistant psychologist, before meeting with a researcher to complete baseline measures. Once baseline measures were completed, the participant then proceeded to randomisation.

Participants randomised to the MBT arm of the trial were allocated a psychiatrist and a therapist, with the treatment intervention consisting of a one-year programme of weekly group and monthly individual sessions of MBT. Participants in the PAU arm of the trial received supervision provided by their Probation Trust for the duration of their licence or community sentence.

How was data collected?

If the participant met all inclusion criteria, they were invited to take part in the trial. Participation was entirely voluntary and all participants were asked to sign consent forms agreeing to take part.

What were the findings?

The results of MOAM (baseline to 24 months) are being prepared for publication in a peer-reviewed journal.