This degree aims to provide an understanding of a range of central philosophical debates, together with a detailed education in Ancient Greek language and culture. All major areas of philosophy are available for study, drawing upon the writings of philosophers both ancient and modern to place your studies in context.

For the most up-to-date advice and information concerning UCL's response to the coronavirus outbreak please go to the Coronavirus (Covid-19) information pages. There is a Frequently Asked Questions section for prospective students and schools.

Grades
AAA
Subjects
No specific subjects. At least two A level subjects should be taken from UCL's list of preferred A level subjects.
GCSEs
English Language at grade B or 6, plus Mathematics at grade C or 5; Ancient Greek is also preferred. For UK-based students, a grade C or 5 or equivalent in a foreign language (other than Ancient Greek, Biblical Hebrew or Latin) is required. UCL provides opportunities to meet the foreign language requirement following enrolment, further details at: www.ucl.ac.uk/ug-reqs

Grades
ABB (more about contextual offers)
Subjects
No specific subjects. At least two A level subjects should be taken from UCL's list of preferred A level subjects.
GCSEs
English Language at grade B or 6, plus Mathematics at grade C or 5; Ancient Greek is also preferred. For UK-based students, a grade C or 5 or equivalent in a foreign language (other than Ancient Greek, Biblical Hebrew or Latin) is required. UCL provides opportunities to meet the foreign language requirement following enrolment, further details at: www.ucl.ac.uk/ug-reqs

Points
38
Subjects
A total of 18 points in three higher level subjects, with no score below 5.

Points
34 (more about contextual offers)
Subjects
A score of 16 points in three higher level subjects including Latin at grade 6, with no score lower than 5.

The first year includes several introductory lecture courses, which provide a foundation for later studies. The programme covers political philosophy, examining questions about the state, liberty and laws; moral philosophy, questioning distinctions of right and wrong, and our motivation for choosing between the two; epistemology which investigates the nature of knowledge and belief; metaphysics, which attempts to grasp the nature of things; and logic, which imparts principles of sound reasoning.

You will study Philosophy and Greek on an equal basis. Optional modules in Latin are also offered.

Upon successful completion of 360 credits, you will be awarded a BA (Hons) in Philosophy and Greek.

All first year modules are optional.

Four Philosophy modules from the following:

All second year modules are optional.

You will select 4.0 credits of optional modules, including:

All third year modules are optional.

You will select 4.0 credits of optional modules, including:

Our teaching is based on lectures and seminars that complement each other. In your first year, you will be introduced to the basic elements of philosophical reasoning through lectures, seminars and small-group tutorial classes. In years two and three your chosen modules will be taught by an expert from within our department through a combination of lectures, related seminars and classes.

Assessment is by a mixture of coursework (essays) and written examination. You may also elect to submit a dissertation as one of your Philosophy optional modules.

Detailed course descriptions are available on the department website: Philosophy and Greek BA.

This programme will assist you in constructing and assessing philosophical positions and arguments, thereby teaching you how to analyse and present complex ideas. Furthermore, it will provide you with an understanding of a wide range of traditional and contemporary philosophical theories. Such skills are transferable to non-philosophical contexts.

The discipline of philosophical training, and in particular its emphasis on rigorous argumentation, logic, and clarity of thought and expression, makes philosophy graduates highly suitable for a wide variety of careers.

Many recent UCL graduates have excelled in the legal profession, training as both solicitors and barristers, while others have entered publishing, journalism, finance, the civil service, Parliament, or local government. Philosophy graduates are also sought after as programmers and systems analysts. A high proportion of students go on to further study in philosophy.

The fees indicated are for undergraduate entry in the 2021/22 academic year. The UK fees shown are for the first year of the programme at UCL only. Fees for future years may be subject to an inflationary increase. The Overseas fees shown are the fees that will be charged to 2021/22 entrants for each year of study on the programme, unless otherwise indicated below.

In addition to looking for outstanding grades in your academic record, we also assess your application for evidence of your ability to engage with philosophical arguments, your skills in reasoning, and your facility with languages and linguistics.

Selection will be made on the basis of information contained in the UCAS application: achieved and predicted academic grades, the level of interest in, motivation towards, and experience of the subject as indicated in the personal statement, the reference supplied, and any relevant contextual factors.

In addition applicants may be asked from time to time to provide further information, such as AS module results, or a response to a questionnaire.

This degree aims to provide an understanding of a range of central philosophical debates, together with a detailed education in Ancient Greek language and culture. All major areas of philosophy are available for study, drawing upon the writings of... 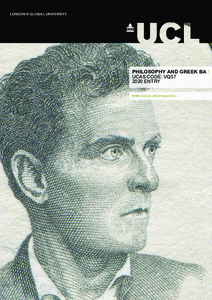