This distinctive and highly flexible programme provides great scope for you to customise your degree according to your interests. With a broad focus on cultural studies and sociolinguistics, the programme allows you to explore topics ranging from film to history, from gender to translation studies. Central to the degree is the study of two languages, with the possibility of changing language after the first year.

Grades
AAB
Subjects
Foreign language required, to include the following if studied as the main language: French or Spanish grade A.
GCSEs
English Language at grade B or 6 and Mathematics at grade C or 5.

Grades
ABB (more about contextual offers)
Subjects
Foreign language required to include the following if studied as the main language: French or Spanish grade A.
GCSEs
English Language at grade B or 6 and Mathematics at grade C or 5.

D3,D3,M1 in three Cambridge Pre-U Principal Subjects. Foreign Language required, to include the following if studied as the main language: French or Spanish grade D3.

Successful completion of the WBQ Advanced Skills Challenge Certificate plus 2 GCE A levels at grades AAB. Foreign language required to include the following if studied as the main language: French or Spanish grade A.

In your first, second and final years you will take modules in your chosen language and the literature, culture, history and linguistics related to it, as well as modules in your other discipline. You may also take modules offered by the School of European Languages, Culture & Society (SELCS), which offer an interdisciplinary perspective, drawing on the full range of specialisms within the school.

You will spend your third year abroad on an academic placement in a country where your main language is spoken.

In your final year at UCL you will continue with your language studies either in both your languages, or concentrate on your main language only. You will select cultural modules in fields of your choice.

You will initially choose two languages (one as a 'major' language, the other as a 'minor' language) from the following wide range of languages taught at UCL:

Some language courses including Arabic, Mandarin, Japanese and beginner's French and Spanish are taught in the Centre for Languages and International Education (CLIE) and may be subject to availability.

Upon successful completion of 360 credits, you will be awarded a BA (Hons) in Language and Culture.

You will spend your Year Abroad at a university in the country where your main target language is spoken, studying alongside native speakers, to make the most of your cultural and linguistic immersion. British Council language assistantships are available subject to approval.

The experiences and skills developed while abroad further academic and personal development, cultural and social awareness, provide a foundation for further study and enhance career prospects.

Advanced language and other modules in your chosen fields.

This programme and the first-year core module are run by the Language and Culture BA Programme Tutor. Languages are taught intensively, and you will be trained in speaking, reading, writing and translating in your target languages. Students on this programme develop their skills in both languages and interdisciplinary and cultural studies.

Detailed module descriptions are available on the department website: Language and Culture BA.

We seek to embed within our teaching the acquisition of transferable skills as well as linguistic and cultural knowledge. Popular career paths for modern language graduates include the financial sector, the civil service, journalism, accountancy, publishing, education, advertising, the media and law. Some graduates pursue careers that make special use of their language skills, including translating, interpreting and teaching, while others continue with graduate training and research.

In your application, you should demonstrate an interest in the literature, culture and history of the languages you are proposing to study. Involvement in cultural activities in the languages (i.e. reading newspapers and magazines, watching television and films or engaging with relevant communities) is regarded favourably, as is travel to the country or countries in question.

Our admissions process aims to assess your linguistic abilities and attainments as well as cultural awareness and intellectual potential. We may interview candidates by telephone in order to establish a level of language ability. If your application demonstrates that your academic ability and motivation make you well-suited to our degree and you receive an offer, then we shall invite you to a Post Offer Open Day. 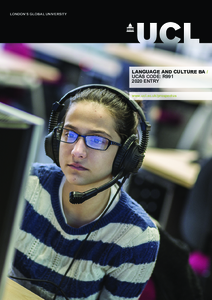