The four-year German BA encompasses intense study of German language and culture from the earliest times to the present. This programme combines a strong emphasis on linguistic competence with an exceptional breadth of research-led teaching, offering a detailed understanding of the development of German culture and society.

Grades
ABB
Subjects
German required.
GCSEs
English Language at grade B or 6 and Mathematics at grade C or 5.

Grades
BBC (more about contextual offers)
Subjects
German required at grade B.
GCSEs
English Language at grade B or 6 and Mathematics at grade C or 5.

Points
36
Subjects
A total of 17 points in three higher level subjects, including German, with no score lower than 5.

Points
30 (more about contextual offers)
Subjects
A total of 15 points in three higher level subjects including German, with no score lower than 5.

Successful completion of the WBQ Advanced Skills Challenge Certificate plus 2 GCE A levels at grades AAB. German is required.

The first two years are essentially 'contextual', providing you with a broad overview and a methodological framework for your studies. Modules can be divided into the following broad areas:

You may also take modules offered by SELCS, allowing you to study literature, history, film and linguistics from outside your subject area. This will enable you to focus on broad cultural movements, issues and approaches from an interdisciplinary perspective and draw on the full range of specialisms within the school.

You will spend your third year abroad in a German-speaking country: at a university, as an English language assistant within a school, or on an approved work placement. In your final year you will choose from a range of advanced options, allowing you to specialise in your own areas of interest.

Upon successful completion of 360 credits, you will be awarded a BA (Hons) in German.

You will select 60 credits from German module options, including:

You will also choose from a range of first-level Interdepartmental modules offered by SELCS. Options may include the study of linguistics, film and history.

You will select 45 credits from a wide range of optional modules. Options may include:

You will spend your third year abroad in a German-speaking country.

You will select 90 credits from a wide range of modules within the German Department. Options may include:

This programme is delivered primarily through seminars, often including individual and group presentations and small-group exercises. You will also attend oral and translation classes in groups of 10 to 15 students. Lectures are less frequent, and are used to convey information which can then be discussed in the small-group teaching.

Thanks to a combination of intellectual training, articulacy and vocational skills, our graduates find employment in many areas of business and commerce, as well as in the public sector (especially, but not exclusively, in education and culture).

While a significant number of our graduates choose to remain in the UK, others spend at least part of their working lives based elsewhere, often in German-speaking countries. Recent graduates have been very successful in gaining employment with leading companies such as Deutsche Bank, Google and the Wall Street Journal, and with organisations such as the British Council.

A high percentage of our graduates proceed to further study, either acquiring additional qualifications in law, journalism or business administration or embarking on Master's or doctoral degrees (in German studies and related areas such as translating, interpreting or international relations).

In your application we will be looking for evidence of your aptitude for language learning, how you became interested in German language, literature, culture or society, what you are doing to further that interest, and why you wish to study this subject at degree level.

If your application demonstrates that your academic ability and motivation make you well-suited to our degree and you receive an offer, then we shall invite you to a Post Offer Open Day, where you will be able to experience the sort of teaching we offer and life in SELCS.

Our admissions process aims to assess your linguistic abilities and attainments as well as cultural awareness and intellectual potential. We may interview candidates by telephone in order to establish a level of language ability. 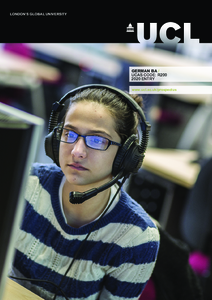