This four-year programme aims to develop students' interest in, and knowledge of, the French and francophone worlds past and present. This includes language, film studies, literature from the medieval and early modern to the contemporary, libertinism, theory, modernism and postcolonialism.

Grades
ABB
Subjects
French required at grade A.
GCSEs
English Language at grade B or 6 and Mathematics at grade C or 5.

Grades
BBB (more about contextual offers)
Subjects
French required.
GCSEs
English Language at grade B or 6 and Mathematics at grade C or 5.

Points
36
Subjects
A total of 17 points in three higher level subjects including French grade 6, with no score lower than 5.

Points
32 (more about contextual offers)
Subjects
A total of 15 points in three higher level subjects including French, with no score lower than 5.

Successful completion of the WBQ Advanced Skills Challenge Certificate plus 2 GCE A levels at grades AAB. French grade A is required.

The structure of the programme allows you to study modules in French language (written and oral), literature, culture, history, politics and society. You will have some flexibility throughout your degree to focus on areas you find particularly interesting. These opportunities increase as you progress.

You will also take modules offered by the UCL School of European Languages, Culture & Society (SELCS), which allows you to study literature, film, art and culture from outside your subject area. This will enable you to focus on broad cultural movements, issues and approaches from an interdisciplinary perspective.

You will spend your third year in France or another part of la Francophonie. You can choose whether to spend the year as a language assistant in a French school, as a student at a French-speaking university, or undertaking a work placement.

Upon successful completion of 360 credits, you will be awarded a BA (Hons) in French.

You will also choose interdepartmental SELCS modules offered by the School of European Languages, Culture & Society. Optional modules may include the study of literature, linguistics, film and history.

You will select 90 credits from a wide range of modules. Options may include:

You will spend your third year abroad in a French-speaking country.

Throughout the degree your teaching will be conducted mainly through small seminar groups, together with some lectures. Seminars are characterised by a 'hands-on' textual and analytical approach, whereas lectures are used for discussing general intellectual contexts.

Most modules are examined either by end-of-year examination papers or by assessed essay work completed during the year. You will also undertake oral examinations in French.

In addition to linguistic and cultural understanding, this programme aims to develop skills in critical reasoning, independent thinking and application of theoretical concepts. You will learn how to conduct research and to communicate effectively both orally and in writing.

Graduates of the department have entered a wide range of professions including finance, commerce, journalism, education, the media, public relations, and translation and interpreting.

We aim to ascertain the depth and extent of your intellectual interest in French culture. Evidence of this may include reading in French beyond the examination syllabus (in particular of literary works) and experience watching French-language films. We may also employ other selection methods. If this is the case we will inform you about them in advance.

If your application demonstrates that you are suitable and you receive an offer, then we will invite you to a Post Offer Open Day where you can experience the sort of teaching we offer and life in SELCS.

Our admissions process aims to assess your linguistic abilities and achievements as well as cultural awareness and intellectual potential. We may interview candidates by telephone in order to establish a level of language ability. 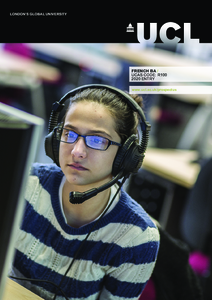