Grades
AAA
Subjects
English Literature (or combined Literature and Language) required.
GCSEs
English Language at grade B or 6 and Mathematics at grade C or 5.

Grades
ABB (more about contextual offers)
Subjects
English Literature (or combined Language and Literature) at grade A required.
GCSEs
English Language at grade B or 6 and Mathematics at grade C or 5.

In the second and third year you will study compulsory modules on Chaucer and Shakespeare and choose six further modules, covering literature from the Old English period to the present day. One students must take at least pre-1800 module and at least one post-1800 module.  You will also have the opportunity to study American literature and literature in English from other countries.

Upon successful completion of 360 credits, you will be awarded a BA (Hons) in English.

Additional costs may include expenses such as books, stationery, printing or photocopying. 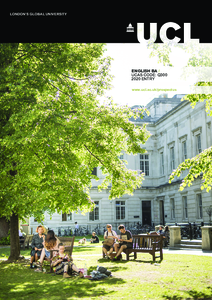