Can a mouse accurately mimic an inherited prion disease mutation? 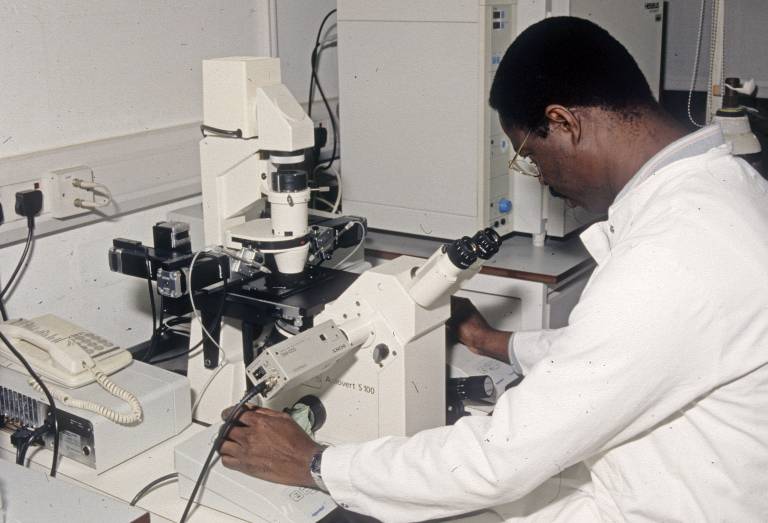 Emmanuel starting out at the Prion Unit

A paper published in PLoS Biology in June 2020 by Dr Emmanuel Asante and other scientists at the Institute showed the first ever genetically modified mouse model which can directly mimic aspects of an inherited human prion disease.  In this article Dr Asante, who until his recent retirement led the Transgenic Programme at the MRC Prion Unit at UCL, explains the experiments leading up to this exciting new finding and how he and the team finally solved one of the outstanding jigsaw pieces of the “Protein Only Hypothesis”. We have just celebrated Dr Asante’s retirement after over 27 years working at the MRC Prion Unit. During his illustrious career, Dr Asante and his team have produced seminal work in the fields of prion diseases and transgenics; modelling several variants in the prion protein gene to study their impact on the disease.

Prion diseases, also known as transmissible spongiform encephalopathies (TSEs), are fatal diseases of the nervous system of mammals, without treatment or cure. This class of diseases includes Creutzfeldt-Jakob disease (CJD) in humans, and bovine spongiform encephalopathy (BSE) in cattle, which is commonly known in the UK as “mad cow disease”. These diseases are caused by a unique disease agent called a “prion” that is made from misshapen forms of a normal protein in the body known as cellular prion protein.

According to the “Protein Only Hypothesis”, a prion must make physical contact with the normal protein, and force its conversion to the abnormal form. The newly formed abnormal protein, or prion, keeps on replicating until the body’s mechanism for removing incorrectly folded or abnormal proteins becomes overwhelmed, and disease ensues.

Inherited Prion Diseases (IPD) occur when someone has a mutation in the gene which encodes the cellular prion protein. Their cells make a slightly different version of this protein compared to everyone else. For example, the disease-associated mutation P102L, meaning the normal amino acid Proline at position 102 in the prion protein is replaced by another amino acid called Leucine, causes an IPD called Gerstmann-Sträussler-Scheinker disease (GSS). An alternative form of GSS can be caused by a different mutation, A117V. There are over 40 prion disease-associated mutations occurring naturally on the human cellular prion protein gene.

One of the implications of the Protein Only Hypothesis is that prions in patients carrying disease-associated mutations must arise spontaneously, without ever being exposed to a prion. However, this concept remained to be definitively proven through experiments.

However, we found that there is a difference between the prions produced in this mouse model compared to those found in IPD patient brains. Therefore authentic modelling of human prion-disease associated mutations should be conducted directly on the human cellular prion protein. Using transgenic technology we created mice that have the human cellular prion protein to model the P102L mutation directly.

Notably, despite overexpressing (making more than the normal amount) the P102L protein in transgenic mice, we were not able to demonstrate a spontaneous prion disease. This was also the case for another human disease-associated mutation called E200K. We were undeterred by these initial findings, because we believed that each disease-associated mutation could behave differently in our model (of which there are over 40).

Next, we modelled another mutation that is associated with an alternative form of GSS called A117V. For some inherited mutations, including A117V, it had not been possible to demonstrate experimentally that they were transmissible and so were not considered authentic prion diseases. Being transmissible means that normal mice develop disease when injected with tissue from another mouse with confirmed prion disease. We successfully demonstrated the transmissibility of A117V for the first time by inoculating A117V transgenic mice with brain material from A117V patients, which caused the mice to develop a brain disease matching that seen in the A117V patients. We also observed some of the ageing A117V mice developed spontaneous disease and abnormal prion protein without being inoculated with any infectious brain tissue. We were able to transmit these abnormal proteins to other healthy mice with the same genetic make-up, meaning that the A117V transgenic mouse line can develop prion disease without any inoculation with infectious material.

One outstanding question was why other transgenic mouse models with similar human disease-associated mutations, including P102L and E200K, did not develop spontaneous prion disease. Studies show the average age at which IPD patients first develop disease symptoms depends on the mutation itself. The disease onset in A117V patients was 10 years or earlier on average than for P102L or E200K patients. This suggests that perhaps we only saw spontaneous disease in our A117V models because of the earlier conversion to the abnormal A117V prion protein compared to other mutants, allowing the spontaneous disease to develop in the relatively short lifespan of a mouse.

To the best of our knowledge, our A117V mice represent the first authentic transgenic model of IPD. They show that mutations of the human prion gene are sufficient to account for IPD without any external exposure to prions, in support of the “Protein Only Hypothesis”.