Finn is a first-year PhD student at the Department of Political Science. 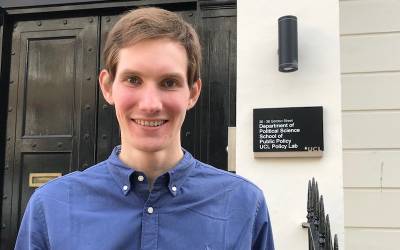 Finn is a PhD student at the Department of Political Science and holds an ESRC studentship at the UCL, Bloomsbury and East London Doctoral Training Partnership (Ubel-DTP).

He holds an MSc in Global Governance and Diplomacy from the University of Oxford, a BA in Integrated Social Sciences from Jacobs University Bremen (Germany) and spent time studying abroad at the University of Cape Town (South Africa) and Sciences Po (France). Previously, he has worked for different NGOs and as a research assistant on different projects. He has furthermore contributed to a series of research briefs and a social media analysis of the German federal elections 2021 in collaboration with Democracy Reporting International (DRI).

Accomplice or Spoiler? Introducing a New Theory and Empirical Analysis of Violent Wings and their Role within Contentious Movements

Under what circumstances do contentious movements turn violent? And how do nonviolent and violent movement groups interact? Previous work has put forward three explanations: violence as an a) sporadic clash; b) force of disintegration; c) and trigger for further escalation. The current project theorises the presence of violence as a continuous coexistence of different tactics. Incorporating both the turn to violence and varying relations between nonviolent and violent groups, the project proposes a new theory that considers a change in tactics driven by cost-benefit calculations. Trying to maximise constituency support and government concessions, movement groups will adapt tactics to a changing environment. Nonviolent groups turn violent when facing repression, closed institutions, and anticipating violence. Violent groups perpetrate violence when repression is absent, while having access to institutions, and when not anticipating state violence. The interaction of nonviolent and violent groups is likewise driven by these factors, yet the intensity of violence ultimately determines whether we see cooperation or competition. Nonviolent groups consider violent groups as Accomplices when they engage in targeted violence. Violent groups appear as Spoilers when turning to indiscriminate violence. I test the theory’s propositions by employing a multi-method research design. A large-N analysis tests the impact of repression, closed institutions, anticipated violence, and the intensity of violence on the turn to violence and varying group relations. A subsequent case-based analysis of the anti-apartheid movement in South Africa 1980-1994 and the German student revolts in 1968 further zooms in on the causal mechanism and reconstructs the varying movement networks in said cases over time. The project seeks to contribute to a better anticipation of conflict dynamics – recognizing paths to violent escalation and its varying effects early on.

Research assistant in the Department of Political Science working on the ‘Toolkit of Resistance’ that investigates changes in contentious tactics across movements over time.

PGTA for the first-year undergraduate module “Political Science I” and “Global Politics” for ESPS0001.