“The evil of poverty is not so much that it makes a man suffer as that it rots him physically and spiritually.” – George Orwell

George Orwell’s classic book on 1930s poverty in Paris and London is to be brought to life in an immersive performance that asks searching questions about homelessness today.

Orwell wrote Down and Out in Paris and London as a result of his own experiences sleeping rough and working on what would now be called zero-hours contracts in hotel kitchens. The performance draws on other Orwell work including his diaries, The Spike and A Clergyman’s Daughter. Readers include writers, activists, politicians, campaigners and young people who have been homeless. In a multi-disciplinary production, modern stories from the streets are experienced alongside the Orwell text.

The performances – in London on 6th June as part of UCL’s Festival of Culture, and Paris in late September – are by the same team who produced the acclaimed reading of the whole of 1984 on a single day in 2017. Each performance will be accompanied by discussions and workshops on the contemporary challenges of homelessness and poverty.

The event is the result of a collaboration between The Orwell Foundation, The Joseph Rowntree Foundation, Libby Brodie Productions and UCL’s Festival of Culture. It is supported using public funding by Arts Council England.

Drawing on the iconic works of Orwell and combining these with real-life, modern-day testimonies, Orwell’s Down and Out Live is an immersive production which focuses on the phenomenon of homelessness both in the past and present day. Read live by politicians, artists, celebrities, activists and members of the homeless community and using a combination of music, story-telling, film and performance this live theatrical event, directed by Hannah Price, will run in London for one day only ahead of a performance in Paris.

The events will be accompanied by new poetic responses in English and French and a short film will be produced by the award-winning film-maker Edwin Mingard.

For those unable to attend the London venue, both performances will be live streamed and viewing events will be arranged in libraries and community hubs across the UK, with both the London and Paris performances being recorded in full and being made publicly available.

Orwell strongly believed that art and literature could make direct and long-lasting change, focusing the minds and the empathies of his audience on the social or political evils of the day. This event will fuse live art and social activism in an outburst of theatre, music and literature. The performance will form the backbone of a narrative that explores and reveals what homelessness is, how it manifests and what damage is does to the individual and to society at large.

The Orwell Foundation is grateful for the continuing support from The Joseph Rowntree Foundation, who are devoted to inspiring social change. Much has improved since the Beveridge Report in 1942 categorised the five evils in society – squalor, ignorance, want, idleness, and disease. But there has been a significant increase in the numbers of homeless people both in the UK and in France. Down and Out in Paris and London – LIVE will shine a light on the issues and foster a cross-cultural dialogue culminating in a policy seminar on homelessness. 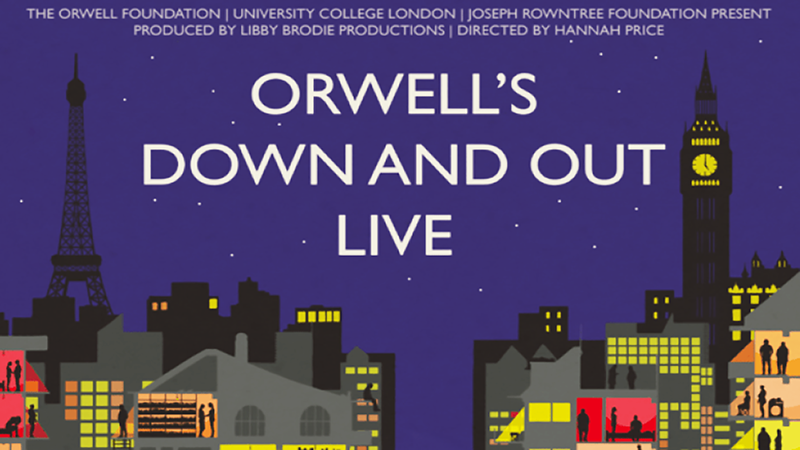