Landslides on Mars might reveal more than they cover up: new insights into Mars' sedimentary budget

In a new paper, Peter Grindrod describes how unique landslides can help to decipher the erosional history of Mars, and the implications for the global sedimentary budget of the planet. 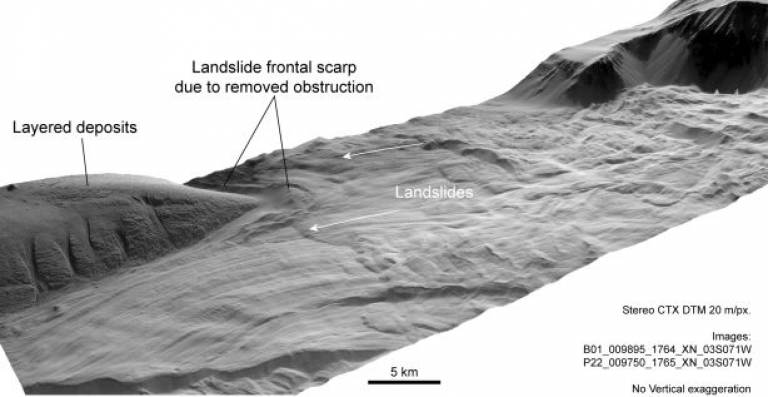 In a new paper, Peter Grindrod describes how unique landslides can help to decipher the erosional history of Mars, and the implications for the global sedimentary budget of the planet.

Mounds of layered deposits, often several kilometres in height, are common in the canyons and impact craters of Mars. These interior layered deposits (ILDs) are high priority targets for exploration because they not only preserve long sequences of Mars' stratigraphic record, but also exhibit evidence for hydrous mineral phases that indicates aqueous activity. Despite their importance, no consensus exists regarding how ILDs form and evolve. Their volumetric contribution to the global sedimentary record is also unknown.

In this paper Grindrod discovered ILDs that have obstructed landslides before undergoing retreat by up to two kilometres. By using crater statistics to constrain the formation age of the landslides, it was concluded that ILD retreat was rapid, requiring erosion rates that exceed any previously reported erosion rate for similar deposits on Mars. This suggests that the ILDs are either extremely friable, if eroded strictly by wind, or comprised of a material whose degradation has been enhanced by ice sublimation.

The results imply that ILDs with a similar morphology across Mars, including the mound in Gale Crater currently being explored by the Mars Science Laboratory Curiosity, have likely undergone similar rapid erosion and retreat, suggesting that their total modern volume under-represents the depositional record and thus Mars sedimentary history.

The new study is published as an open access article in Geology: