UCL School of Pharmacy joins the Fight the Fakes campaign

UCL has become the first educational institution to partner with Fight the Fakes. The UCL Fight the Fakes Committee is thrilled to announce that UCL School of Pharmacy has officially joined the Fight the Fakes campaign to raise awareness about the dangers of counterfeit medicines.

A key objective of the collaboration is to increase public awareness and educate students as “the pharmacists of tomorrow” on the serious global health threat of counterfeit medicines. It is particularly important that students are made aware of this issue as every pharmacy across the EU will scan medicines to verify authenticity according to the Falsified Medicines Directive as adopted by The European Parliament and the Council of the European Union by 2018.

Counterfeit medicines put patients at a high risk due to unknown content and its potentially dangerous effects that could cause further illness, disability or even death. The World Health Organisation estimated that between 1-10% of pharmaceutical drugs sold around the world are counterfeits, and it may be as high as 50% in some countries. Just this year, UK intelligence-led enforcement operations have seized £15.8 million worth of counterfeit medicines of which majority of products originated from India and China.
Spearheaded by academic lead, Oksana Pyzik, a UCL Committee was formed and will aim to bring this issue forward and protect the public from this global threat. We are happy to announce our full committee below: 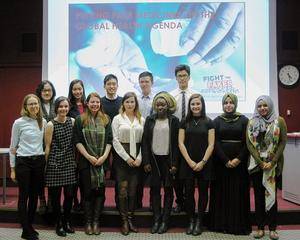 Meet the UCL Fight the Fakes Committee and watch our video to learn more!