A recent study by Dr Simon Gaisford’s group has shed new light on the viability of solid and liquid probiotic formulations and was reported in the Daily Mail, Daily Express, The Times and The Telegraph. It found that liquid products were in general capable of delivering more viable bacteria than solid products. It also suggested that taking products in the fasted state gave the best chance of successful delivery. 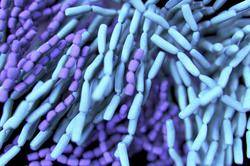 A recent study aimed at exploring some of the myths of oral probiotics has shown that some commercial probiotic formulations can potentially deliver therapeutic numbers of probiotic bacteria to the small intestine.

The study compared 8 commercially available products. Liquid products (such as yoghurts and aqueous suspensions) generally fared better than solid products. All liquid products contained equal to or more than the label claim. Solid products all contained fewer viable bacteria than the label claim. All products lost viable bacteria when exposed to gastric fluid. However, four products (Actimel, VSL3, Yakult and Symprove) maintained viable bacterial numbers for 10 mins and three (Actimel, VSL3 and Symprove) were viable for up to 90 mins. Following exposure to gastric fluid, the bacteria in the same three products were shown to grow in growth medium over 12h.

The results suggest that these products are capable of delivering viable probiotic species to the gut and indicate that the best way to take them is in the fasted state (to minimise gastric emptying time). Recent data have suggested that probiotics are effective for some conditions (VSL3 for pouchitis and Symprove for IBS) – this study provides a mechanistic explanation for these positive effects. The paper will appear shortly in Beneficial Microbes. 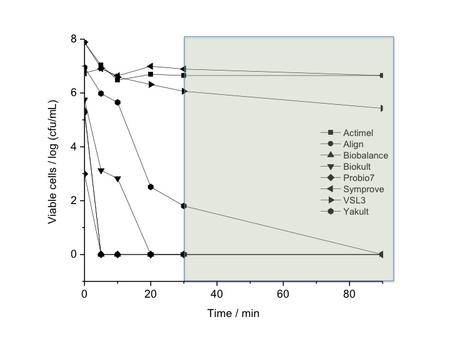