Project Description: Certain cancer-related genes contain specialised DNA sequences that can form four-stranded structures, called quadruplexes, that are fundamentally different from normal double-helical DNA. These quadruplexes structures are mostly ignored by the transcriptional and replication machinery of normal cells. However in cancer cells where there is dysregulation of this machinery, they can be selectively stabilised by quadruplex-specific small molecules. This results in decreased transcription of the target gene. 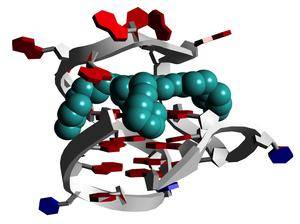 The approach is currently being focussed on pancreatic cancer, which is a cancer of high unmet clinical need. Less than 5% of pancreatic cancer patients survive more than 5 years and the current drug of choice, gemcitabine, rapidly becomes ineffective due to resistance.

We have designed a series of novel compounds that target the quadruplex in a gene involved in enhancing resistance in pancreatic cancer. One compound, CM03, is especially promising and shows significant anticancer activity in an in vivo pancreatic cancer. It does not appear to have significant toxic side-effects and is currently being further assessed with a view to eventually taking it into human clinical trials.

The approach is being extended to other human cancers. 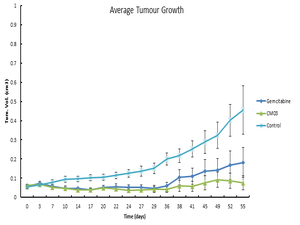 This graph shows the effect of the experimental drug, CM03, which we have developed. It effectively stops tumour growth whereas the current drug used in the clinic, gemcitabine, is effective only for a short period of time before tumour regrowth is observed (data obtained by Professor Barbara Pedley and colleagues).

Molecular modelling has been used to help design and optimise the active compounds. The figure at the top of the page shows a visualisation of the compound CM03 bound to a quadruplex formed by a part of a drug-resistance cancer gene (modelling by Dr Shozeb Haider, compounds synthesised by Drs Stephan Ohnmacht and Chiara Marchetti).