Structure of Kif15, a motorinvolved in bipolar spindle formation

Project Description: In this project, we determined the crystal structure of human Kif15 with bound Mg2+-ADP. Kif15 is a molecular motor of the kinesin superfamily involved in bipolar spindle formation. We also provided the initial biochemical characterisation of Kif15, and compared its properties with its functionally related partner Kif11. 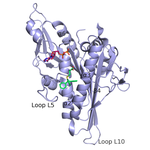 We revealed that Kif15, in contrast to Kif11, does not have a second nucleotide-independent microtubule (MT)-binding site in its C-terminal tail domain. Furthermore, we investigated the interaction of Kif15 with MTs and elucidated structural differences between these two motors, which indicate profound differences in their mode of action, in agreement with current models of MT cross-linking and sliding.

Kinesins constitute a superfamily of MT-based motor proteins with important cellular functions ranging from intracellular transport to cell division. Some kinesin family members function during the mitotic phase of the eukaryotic cell cycle and are crucial for successful progression of cell division. At the early stages of mitosis, during prometaphase, certain kinesins are required for the formation of the bipolar spindle such as Kif11 and Kif15, which seem to possess partially overlapping functions.

Because kinesins transform the chemical energy from ATP hydrolysis into mechanical work, inhibition of their function is a tractable approach for drug development. Drugs targeting Eg5 have shown promise as anti-cancer agents. Kif15 has recently come to the fore because it can substitute the functions of Kif11, and may itself have potential as a prospective drug target.

The structure of the human Kif15 motor domain and the recombinant expression of Kif15 in large amounts for inhibitor screening will facilitate initiation of the drug development process.