A number of linguistic mismatches and combinatorial possibilities between the inherent gender and the grammatical gender of nouns and the unique number morphology of the South Slavic languages create a rich array of morphosyntactic variability found both within and across speakers in this language area.

While a long dialectal tradition classifies local varieties in terms of lexical items (specifically, words for ‘what’), the present project aims to leverage experimental psycholinguistic research as a means of charting the morphosyntaxes of these languages. 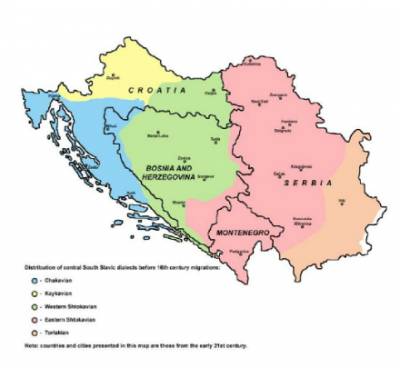 Figure 1: Map of the Bosnian/Croatian/Serbian dialects based on the use of the word for “what”

Pioneering experimental methodology, the project will attempt to cross the linguistic boundaries partly created by the political climate following the dissolution of Yugoslavia in the region by identifying similarities and differences (in the relevant morphosyntactic structure) that are the product of geographical differences rather than prescriptive policies that have influenced the official languages spoken in Bosnia, Croatia, Serbia, and Slovenia.

The project's research builds on existing methodology developed for Slovenian in recently published work by experimental morphologists Andrew Nevins and Lanko Marušič to be applied at the six partner research institutions in parallel.

The project will employ elicited production and comprehension tasks to study the gradients of variability between the agreement controllers of coordinate structures and the agreement targets that include relative pronouns, attributive adjectives, and verbal agreement.

The second phase will build on the initial period of strengthened ties and collaborative achievement to address wholly novel experimental questions about the effects of topicality, inflectional ambiguity, and prosody on coordinations, thereby opening a swath of new interdisciplinary research topics to be explored far into the future.

The research will thus extend the experimental study of morphosyntactic variability across linguistic boundaries and enables modelling of the results in terms of dialect isoglosses.